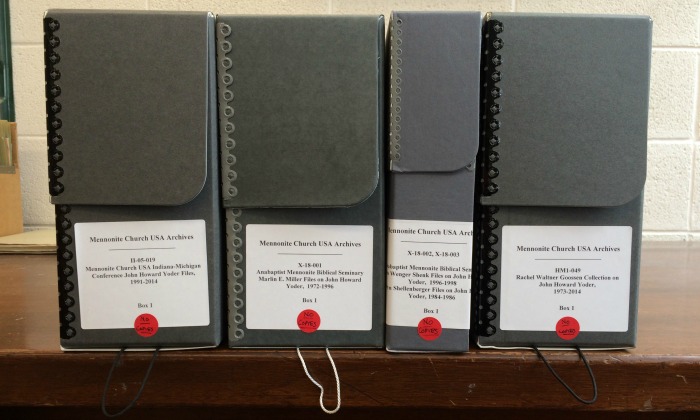 The public may access them on-site at Mennonite Church USA Archives in Goshen, Ind.

Goossen, a professor of history at Washburn University in Topeka, Kan., wrote an article about Mennonite institutional responses to Yoder’s legacy of sexual abuse for The Mennonite Quarterly Review (link) after she was invited to conduct independent research by the Mennonite Church USA discernment group on sexual abuse. (An abbreviated version of the article appeared in the January issue of The Mennonite.)

“It is rather remarkable how much material was available to me, despite what was destroyed by Yoder and others,” said Goossen on Feb. 6. “People by and large were forthcoming, and I appreciated how open people were in talking with me.”

She said a number of the people she interviewed in person brought her files or small boxes containing documents related to Yoder that they either loaned to her temporarily or asked her to pass on to the Archives when she was finished.

“People who had been hanging on to secrets wanted to go the direction of openness,” she said.

“I couldn’t have predicted that at the beginning of this project.”

Goossen named one significant set of materials part of the available collection: documents from the Prairie Street Mennonite Church/JHY task force in Elkhart, Ind., that met during 1991 and 1992.

The task force originated within the Prairie Street congregation. Task force members sought support for investigating Yoder’s actions and confronting him, so they successfully called on high-profile Mennonite Church (MC) leaders to join them.

In 1992, that group heard from eight women victims in person, and the task force then charged Yoder with sexual abuse. They turned over their findings to IN-MI, which held Yoder’s ordination credential.

“This task force was a very important group, as they talked a lot with women victims,” Goossen said.

On Feb. 4, Colleen McFarland, director of archives and records management for Mennonite Church USA in Goshen, Ind., described the Yoder material as “two linear feet of material,” meaning it takes up that amount of space on the shelf. (Archivists measure in linear or cubic feet, not pages.)

While anyone may access the materials in the Archives, they may not be digitally reproduced, photographed, or photocopied, according to the finding aid.

A statement from AMBS explains the onsite review access: “This approach … was deemed appropriate given the weightiness and sensitivity of the subject matter, allowing for the materials to be handled transparently and responsibly. The decision to release the documents was accompanied by an awareness that the documents are best understood in historical context and that allowing only onsite review is most respectful of those personally involved in the story, especially the victims and their families.”

IN-MI’s statement includes this: “Conference leadership tried to strike a balance with a release policy that encourages serious research into Yoder’s misconduct and the conference discipline process while not fostering a frenzy on the Internet. Because conference is committed to proactive, positive engagement with the Yoder discernment process, we decided to release materials early for historical research.”

When Goossen began her research on Yoder in January 2014, she had already developed a career as a Mennonite historian and a scholar of peace studies, but she had no personal connection to Yoder or, as far as she knew, any of the women victims.

Goossen asked that the AMBS and IN-MI documents be made public so that other historians and researchers would have access to the documents cited in her footnotes.

“I requested that all the documents shared with me be made available to others as well.”

Goossen received copies of the documents from AMBS and IN-MI so that she could work from her office in Topeka, but she also made research trips to Indiana.

After completing her research, Goossen donated to the Archives the documents she had collected and a number of oral histories she recorded during her research.

Goossen interviewed 29 individuals. Thirteen of those allowed her to share the interviews with the Archives.

The “Waltner Goossen Collection on Yoder” includes documents collected by various individuals close to Yoder, various intervention attempts and the disciplinary process, Goossen’s correspondence with sources, and 10 oral history interviews, according to the online finding aid.

Only one of the 10 available interviews is with a victim of Yoder—Carolyn Holderread Heggen. (Names of other victims were redacted out of all records before they were sent to the archives, said McFarland.)

The rest are interviews with administrators, accountability and support group members, Church Life Commission members and more—all with names attached.

In addition to the new collections, there are four boxes and three folders in the “John Howard Yoder Papers” that are restricted until 2033 at the earliest. Most of these are materials unrelated to Yoder’s abusive behavior: for example, criticisms of Mennonite Central Committee in Box 8.

One of the boxes, “Sexual Harassment Charges and Conference Discipline,” is restricted from public use by Yoder’s family until 2047. Yoder’s family gave this box to the Archives after Yoder’s death in 1997.

McFarland said that a records donor may change the restrictions on materials.

“A records donor can decide to make something more open or more restricted down the road,” said said. “It doesn’t have to be a forever-and-always thing.”

McFarland said that personally and professionally she prefers as much openness as possible, but she acknowledges the challenges in deciding how accessible to make sensitive materials.

Finally, a lot of the decision-making surrounding access to historical documents of sexual abuse is uncharted territory.

“The only other model we have is the Catholic Church,” McFarland said. “There isn’t a lot out there for best practices.”

AMBS material:
• Documents pertaining to the process by which Yoder and his employer, then AMBS, navigated difficult personal and institutional relationships created by Yoder’s sexual harassment and abuse of women. These materials were collected and created by then-seminary president Marlin E. Miller. Materials include documents pertaining to Yoder’s ordination and church membership, employment arrangements with AMBS and the University of Notre Dame, Yoder’s papers on singleness, marriage and sexuality and AMBS faculty members’ responses, materials pertaining to Yoder’s covenant group at AMBS, documents about his resignation and correspondence with various parties during and after Yoder’s period of employment at AMBS. (Finding aid here).

• A small set of documents from the files of former Associated Mennonite Biblical Seminary (AMBS) board member Evelyn Shellenberger. Materials include correspondence from and about Yoder regarding his harassment of women and his continued presence at AMBS. (Finding aid here).