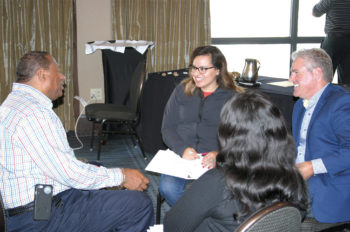 Mennonite Church USA Executive Board members, from left, Leslie Francisco of Hampton, Va., Erica Littlewolf of Newton, Kan., and Jim Caskey of Goshen, Ind., work in a small group during the board’s Sept. 28-30 meeting. Zenobia Sowell-Bianchi of Chicago is facing away from the camera. Paul Schrag — MWR

The Mennonite Church USA Executive Board on Sept. 30 approved a plan to make the summit the starting point of a two-year process to shape the denomination’s future.

The summit, held over 14 hours during the MC USA convention July 4-8 in Orlando, Fla., generated a nine-page document listing ideas, beliefs and visions. Delegates decided to call it “a dynamic document . . . to guide further discernment.”

Members of the Executive Board set the discernment process in motion at their Sept. 28-30 meeting in Kansas City. They approved Journey Forward — a vision-and-values statement and a plan to encourage the denomination’s 625 congregations and 69,000 members to study it and give input to develop it further.

The process is envisioned as a denomination-wide effort to create a new vision and identity document, based on themes that emerged from the Future Church Summit, for delegates to test and discuss at the 2019 convention.

Goals include to “renew our commitment to being together in our differences, build greater trust among us and unify us with clearly discerned identity, vision and values as Anabaptists in the 21st century.”

Between April and December of 2018, each MC USA congregation will receive a “Journey Forward: Embracing God’s Hope” document and study guide. A survey will be written to gather responses, with all input due by the end of the 2018.

During discussion of the Journey Forward proposal, board member Leslie Francisco of Hampton, Va., urged special attention to Millennials and Generation X and to bridging divisions in the church.

“Can we emphasize being good neighbors rather than adversaries?” he asked. “Can we say we are in this together, as Christ is the center and we all reach toward that center?”

* Grounded in the whole story of Jesus. We live out our faith in radical discipleship to Christ.

* Transformed by the Holy Spirit in community. We share our lives together as a reflection of the fullness of God’s love and welcome to all people in diverse communities.

* Empowered to do God’s reconciling work. We extend healing and hope by witnessing to God’s vision of shalom for all creation and standing with the marginalized through truth and action.

Executive director Ervin Stutzman observed that some have asked if the Journey Forward statement might replace the Membership Guidelines, which delegates reaffirmed in 2015 and could re-evaluate as early as 2019.

“At this point, we are not prepared to answer that question,” he wrote in his report to the Executive Board. “But we can say that we are beginning to work on a new guiding process for the church, and we’ll see where that leads us. And it’s OK to signal it could replace the guidelines, but we need the congregational study and the feedback to help us determine that.”

Working in two closed sessions, the board decided a gay man could serve on a denominational committee. But the board faced an additional layer of difficulty when the issue became clouded by racial tension, leading a board member to resign.

The board reconfirmed its appointment of Doug Basinger to the Leadership Discernment Committee. Basinger, of Seattle, is married to a man. The board had suspended his appointment in June by a vote of 8 to 6. When the board appointed him last spring, most of the members did not know of Basinger’s sexual orientation and marital status. They decided they needed more time to make an informed decision.

On Sept. 30 the board voted 8 to 5 to reconfirm Basinger’s appointment.

Announcing the decision, moderator David Boshart said the board had considered how to manage the tension between differing views on LGBTQ people in the church while honoring commitments to decisions delegates have made.

He cited the 2015 forbearance resolution, which calls for accepting differences of belief and practice on sexuality, and the Membership Guidelines, which affirm a traditional position on marriage.

“In my attempt to be inclusive and nondiscriminatory, I withheld information about Doug, but in so doing, I inadvertently alienated persons of color who serve on our Board,” Hauder wrote. “I am hopeful that my stepping down will better enable Doug’s appointment to be reinstated and for necessary, ongoing conversations regarding race and use of power.”

There is no policy on whether sexual orientation or relationship status should effect the selection of churchwide committee members.

After making their decision, board members worked on a plan to prevent a similar situation from happening again and to deal with the fallout from mistakes made this time.

They made a list of commitments, including to develop explicit policies for committee appointments and to address the hurt that resulted from Basinger’s selection.

“The board did an assessment of what hurt has been caused in this process and to whom,” Boshart said, describing the board’s work during closed sessions. “The board has contributed to that hurt and needs to take responsibility and made a commitment to work with larger issues to work toward healing.”

In other business, the board:

* Received a proposal from the Higher Education Future Church/School Relations Committee. Board members discussed the proposal during an off-the-record session. Details will be made public after the boards of the MC USA higher education institutions receive it.

* Heard an update from the committee that is searching for the denomination’s next executive director. It hopes to recommend a candidate by April. Ervin Stutzman will retire in the spring of 2018.

* Conducted a review of Everence, the financial stewardship agency that manages $3 billion of assets and serves MC USA, other Anabaptists and other Christians. Everence president and CEO Kenneth D. Hochstetler and board chair Duane Oswald made a presentation.