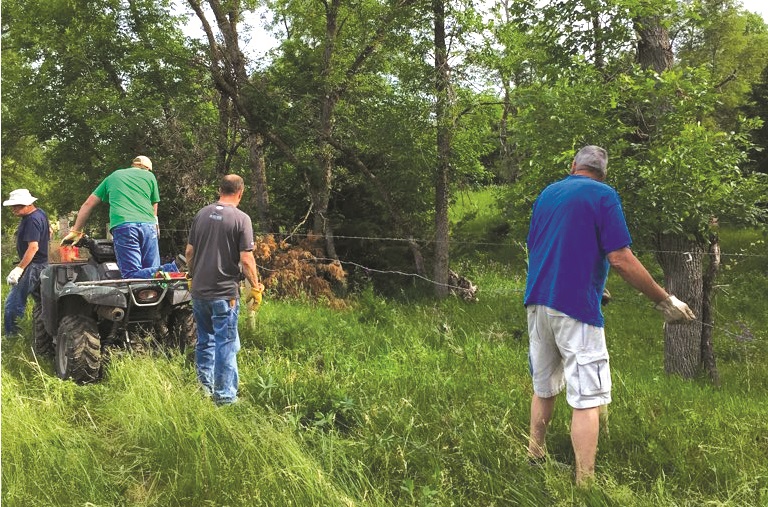 With long-term rebuild sites shut down through the summer due to COVID-19, Mennonite Disaster Service (MDS) is evaluating how to return to its mission of cleaning up and rebuilding safely after disasters.

Standard operating procedures — such as retired volunteers sharing meals and sleeping in close quarters — are being revamped just as hurricane season gets underway in the United States.

“The week we closed down, one of the projects in California, there were 14 volunteers sleeping in a church Sunday school room,” said MDS executive director Kevin King said. “When I think of that I cringe. How the world has changed.

“For the near future that won’t be happening for a while. It may mean more RVs. It may mean spreading out more positive air flow. We may even have a safety officer to monitor things.”

In the near future, volunteer groups may skew a bit younger and come from one location rather than a mix from different areas. Overnight stays may be mostly discouraged. King said MDS hopes to establish new long-term recovery plans for fall and winter by July. And those plans will build on shifts that have already been happening for a few years.

After devastating hurricanes like Katrina and Rita in 2004, MDS pushed more resources to centrally planned large-scale projects. But for the past two or three years, MDS has worked to grow capacity at the local level by supplying tool trailers and training at the regional level.

“No national proclamation will cover our response throughout the U.S.,” King said. “It will be grassroots decision-making with a number of guidelines, always with risk management in mind. . . .

“The first projects — if any hammers are ringing hope — will be at a more local approach, not a national-led effort right away. Those will probably be the last to arrive on the scene.”

In spite of all that, there still may be times MDS doesn’t respond to every disaster. Spring was relatively quiet for tornadoes, although 140 touched down in 10 states on Easter weekend April 12-13, killing 34 people across the Southeast.

MDS did not respond, but Christian Aid Ministries did, sending teams to do cleanup in Tennessee, South Carolina, Mississippi and Georgia.

James Yoder, who oversees CAM disaster response in the U.S., said it was a bit of a challenge to work around various states’ guidelines and travel restrictions, but cleanup efforts were not disrupted very much.

“Our cleanup efforts this summer should not be hampered should a tornado or hurricane cause significant damage,” he said. “There may be an exception in the event of a large disaster cleanup requiring overnight accommodations and large eating arrangements for out-of-state volunteers, but that would just have to be worked out.”

Brethren Disaster Ministries has closed some sites, while maintaining or starting others. BDM is accepting local volunteers only for tornado rebuilding in southern Ohio, without providing lodging or meals, but it is working with a partner in Lumberton, N.C., to host groups interested in traveling to serve there.

Long-term Brethren rebuilding sites in Puerto Rico shut down for a month in March and anticipate completing 25 cases by the end of the month, often with local clients helping.

A handful of those volunteers are students in Hesston (Kan.) College’s Disaster Management Program, which just concluded its 15th year. They and other students were going to spend spring break at an MDS site until COVID-19 canceled the trip two days before it was to begin.

While it was hard enough to do instruction on basic construction techniques through online learning after physical classes were ended on campuses across the country, a bigger issue for students taking part in Hesston’s DMP was cancellation of MDS projects over the summer.

“One of the unique parts of the DMP is the eight-week summer field experience where students are on an active MDS site and they get credit for it,” said DMP director Cleo Koop. “They get to experience another culture and the inside of an MDS unit.”

Field experiences typically occur between the first and second years of the program. Without summer projects, there are no experiences.

“We’re postponing to summer 2021,” Koop said. “We’re hoping things will open up and the students can go after their sophomore year to make the most of the situation.”

Such flexibility and re-evaluation is also happening at MDS. Canadians have often traveled south — especially during the winter — to help on sites.

King said the future is still murky, but he ventured that not many Canadians will be coming to the U.S. this year due to the challenges of international travel and having to self-quarantine upon arriving home.

Predictions of another pandemic wave add to uncertainty King hopes to temper with an abundance of caution as he prays for God’s wisdom.

“The last thing we need to do is harm other people by carrying a virus into a community,” he said. “Not only caring for ourselves, we need to mind our neighbors. . . . Usually our three-word mantra is ‘respond, rebuild, restore,’ and I would add a fourth. ‘Responsibly.’ That does speak into this risk factor. We want to do no harm in responding, restoring and rebuilding.”