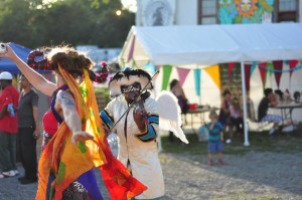 This post originally ran on the Mennonite Women USA blog.

For some reason, I have particularly vivid memories of recess where the Southern California sun would send us hiding in the shadows of the buildings, the only true respite being the beloved orange slices occasionally passed out on particularly scorching days. It was here, in between Capri Suns and the daunting topic of addition, where the foundation for my understandings of the world was laid. During this time, my friends and I, both male and female, with every skin color you can imagine, played with the fierce determinism familiar to all young, bright souls still untouched by the burdens of adulthood. The innocence of a child’s world was all I knew, where everyone is a likely best friend no matter skin color, language, or clothing. In fact, it was a pretty simple framework in which I existed: unless you tried to kiss me or fight me, you’re in.

There was a particularly beloved structure on our playground, that of a miniature metal bus frame with wooden seats which we would take turns driving, passengers requesting the next destination, Disneyland being the most frequented site. It was on one of these sweet days when I sat on top of the bus, overlooking my next play option, when someone from below shouted up at me. I looked down to find two young children, unfamiliar to me, staring up with a wild gleam in their eyes. “You’re as white as a toilet seat!” one of them yelled and although I was confused, I immediately knew this to be intended as offensive. Feelings of self-consciousness and hurt welled up within me and not understanding why these two potential friends would make such a comparison, I yelled back with equal ferocity “You’re as brown as a chocolate bar!” And so went my first experience with the notion of race (and the first of many failed comebacks). There was no going back to the “colorblind” eyes I had once viewed the world through. The fact that one’s skin color played a role in this wild life journey was now a reality I could never forget although how much this seemingly silly factor determined the safety, success, and quality of life for a whole people group, I would not come to understand for many years.

It’s not surprising that I would not have to grapple with racial prejudice again until I moved to Philadelphia at the age 24.

My move to the “City of Brotherly Love” (which seems to display an equal love for hoagies and Rocky Balboa) was a little more of a culture shock for me, this being the first major city I’d ever lived in and one with nationally known poverty and crime rates. During my first year here, I spent time working in both the poorest and richest neighborhoods in Philadelphia and what began as a slight, uncertain disturbance within me soon became a roaring discrepancy as again and again the correlation between a neighborhood’s crime rate, cleanliness, and available green space and the majority of the locals’ skin color grew more and more obvious to me. Not long after this I found myself working at a local non-profit working to end homelessness. It was here where I was first introduced to the concept and ugly reality of systemic injustice, where the macro systems of a government and economic structure can create, uphold, and cultivate current day social atrocities. I began to notice the trickle down effect between this large-scale system and the individual struggles I was bearing witness to in the lives of the residents I worked with who were mainly African-Americans. And yet during all of this time working within a very successful and nationally known non-profit, not once was the concept of white privilege named, let alone discussed, as a major part of the issue we were fighting against.

Fast forward to last summer when I joined the Carnival de Resistance for our residency in Charlotte, NC.

Twenty of us gathered from around the nation to set up an eco-village which we would reside in between theatrical performances weaving faith, art, and activism. Our days were filled with preparation for our performances based around the four elements of the Earth and our nights with Midway games, stilt walking trees, and fire play. But before jumping into engagement with the local community, the crew gathered for five days of training which included rehearsal, theological discussions, and an anti-racism workshop.

It was during this training when the difference between racial prejudice and racism was laid out for me, racial prejudice being the negative opinion of a race of people held by individuals (“individuals” being the key word here) and racism being the large scale, macro system which decides who has access to resources such as education, work, and even healthy food (take for example US policies pushing Native Americans onto reservations). We drew a box and inside the box were those who had full access to everything one would need to live a quality life.

On the outside of the box were those who were not invited or who had to work much harder to gain access into the box. To name a few characteristics, those on the outside included:

I’d lived in Philly long enough to know all this to be true. In a logical sense, for someone’s who’s relatively involved in the social justice scene, I could have filled this out alone. And yet there was a personal sense missing from this process. By this time I was well aware of the larger issues and red tape facing anyone who is a minority but I had yet to recognize and come to terms with my own racial prejudices, a “heart” understanding as I’ve heard some call it, which is easy to do when you live in the dominant grouping (well, except for the vagina part of course). In fact, over the past 6 months, I had been praying for the discovery of my own prejudices as I knew they were in there, click clackin’ around as it’s impossible to grow up in the United States without such biases seeping into our worldly perspective.

It was during one of our breaks between rehearsals and training, when I had a painfully invigorating conversation with another crew member, an African-American woman, who went about exposing the blind eye I had concerning my own white privilege.

The conversation, in a nutshell, went something like this….

Me: “I feel like I’m walking on eggshells when I’m around you.”

Similar to my experience on the playground, I was confused and hurt by this conversation. My fragile white self cried out “Not fair! How dare you scrutinize my scrutiny! My emotions and opinions are just as valuable as yours! You don’t know the pain I’ve gone through!” I had interpreted her message to be one that devalued my own life experiences, trauma, and everything else we oddly cling to which reminds us of our humanity. But despite these defensive arguments, another voice within me continued to wonder at this “other world” where someone with a dark skin tone would need to justify their standing on a city corner to a police officer or feel the need to call every white woman “Ms.” even if she were younger than them, where you’re not allowed to complain about how one of your teachers would treat you differently than his white students, and where you would need to provide a receipt much more quickly if a store alarm went off than your white friend would need to.

Her point, although it took me quite a while to understand, is that she constantly needs to check herself in order to appease the dominant, white culture. If she doesn’t submit to the social rules created by those with access to resources, which has been shaped by hundreds of years of racially charged white European rule, she will experience consequences that someone with white skin would not have to face or at the very least at such extreme measures (think getting arrested for not turning on your signal when changing lanes, being shot with 19 bullets for being misidentified by police even though you’re unarmed or murdered for playing with a toy gun as a 12 year-old). And to know this type of brutal hate was traced back to my own ancestors, that by simply having white skin I have somehow participated in this deep emotional and psychological pain that African-Americans have had to live with for hundreds of years, well, let’s just say it was a heavy and enlightening week indeed.

After the Carnival, a whirlwind of colors, experiences, and lessons, I returned to Philadelphia and began to take notice of things I hadn’t seen before. For example, the way black men would look almost ashamed if I caught them looking at me while we passed on the sidewalk, as if they were doing something immoral or, in wealthier parts of the city, the way some black men would carry their bodies making them look smaller than they really are almost as if trying to disappear or the way many would immediately move out of my way if there wasn’t enough room on the sidewalk, avoiding those egg shells. It’s as if this veil was being lifted on another social scene that had always existed around me and yet I’d never noticed.

I’m coming to understand these behaviors as nuanced, although very damaging, manifestations of white privilege.

The fact that I’d made it until first grade without being exposed to the social categorization that is racism is simply because I’m white and therefore on the privileged side of this unsightly power game. The fact of the matter is the two children who approached me that day on the playground and every child with a darker skin tone are forced into this understanding far earlier than I because for them it can literally be a matter of life or death.

And although this recent conversation was a painful exposure of my own white fragility and privilege, it’s

become a dear gift to me as I work to identify injustices in this world. If I am to truly embody Jesus Christ, “the scandalous tradition of the enfleshment of God” as Richard Rohr would say, I must be willing to not only actively weed out the lies seeded within me by our dominant culture but also call out larger, systemic oppression being maintained by a faulty economic system arched toward the benefit of the few at the expense of the many, including creation.

There is still so much for me to learn about the way this society is bent towards my success and everyone else who looks white but I’m beginning to see that one of the most powerful responses is to face and name it as what it is: white privilege.

Welcome to my life.

The views expressed do not necessarily represent the official positions of Mennonite Church USA, The Mennonite or the board for The Mennonite, Inc.