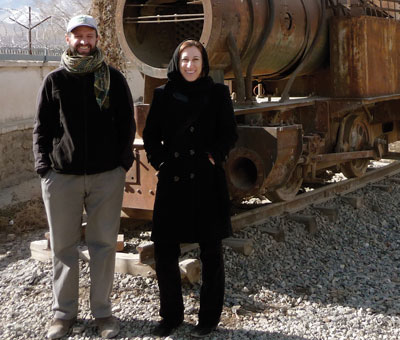 The death of Mennonite Central Committee worker Glen Lapp in Afghanistan last
August raises questions about pacifists working in war zones without armed guards. I stayed with Glen and other MCC workers at a small guesthouse during my visits to Afghanistan to teach peacebuilding at Kabul University.

On my first night in Afghanistan I lay in bed watching my breath coil above me in a heatless room, hovering around 30 degrees F. All night, I listened to the calls to prayer from the local mosque and felt the vibrations of helicopters overhead. In the morning, I stood at my room’s bay window trying to figure out if I could prevent the cold air from blowing in or stop the windows rattling with every helicopter passing overhead. That’s when I realized the window of my ground-floor room did not have a lock. More than feeling the cold or hearing the noise, I felt afraid. After struggling unsuccessfully to get the window locked, Glen concluded, “It doesn’t really matter; we don’t lock the front door to the house either.”

To be fair, the guesthouse is in a cement-walled compound with a locked gate. But that night, as I stared at the ceiling, I thought, This is pacifism circa 2010. Most of the other foreigners in the city have machine guns and soldiers between them and the Afghan streets. I remembered the story of Pennsylvania Quakers in the 1700s who kept their doors unlocked at night to send a peace signal to the Natives (who, by the way, were referred to as terrorist insurgents back then) waging war against the new, often violent settlers who were taking their land.

Pacifism, as I understand it, means most literally “lover of peace” in Greek. But more specifically, in the Christian tradition, pacifism focuses on living without harming others at the minimum and as much as possible loving enemies and doing good to those who harm you.

Pacifism assumes that punishment and retribution do little to bring about change and tend to escalate the cycle of violence. It is not moral or even possible to “kill all the bad guys.” It is only possible to identify and address factors leading to violence in the environment, such as unemployment. As a pacifist there are causes for which I am prepared to die but none I can imagine that would lead me to kill.

The U.S. military is a scapegoat for many U.S. pacifists. Condemning military aggression is easy; we point fingers at other people who do harm. There are not many pacifist efforts to love people in the military.

Yet many new military leaders are starting to preach that, counter to traditional military strategy, the “shock and awe” of dropping bombs does not grow peace; it creates more hatred, an endless cycle of violence. When U.S. soldiers faced an angry mob of Haitian youth after the earthquake, their leader ordered the soldiers to “take two steps back and sit down” rather than fire their weapons at the crowd. In turn, the surely surprised Haitian youth mirrored the soldiers and also sat down. Pacifism may not be intuitive, but military leaders know that nonviolent approaches can be ingenious when practiced bravely.

How do pacifists love those they disagree with?

A tale of Mennonite pacifism

I come from a long tradition of self-identified pacifists dating back to the 1500s in Switzerland, where my ancestors scratched my last name into the town castle’s torture chambers. Perhaps they were tortured for something less noble than pacifism, such as public drunkenness. As for many other Mennonites, pacifism has been a point of family conflict. In the last few generations, my Mennonite-born uncles and grandfather served in the U.S. military.

But the legends of early Mennonites loving their enemies made a profound impact on my psyche and professional life. My faith draws on images from the Martyrs’ Mirror of Dirk Willems pulling the armed guard who was chasing him out of the frozen river, only to then be arrested and put to death for his beliefs. Or Janneken Munstdorp, who, shortly before being burned at the stake in 1573 for refusing to recant her belief in Anabaptist pacifism, wrote a letter to her children similar to the one I have written to my own children should anything happen to me while doing my work in peacebuilding.
Pacifism incarnate was difficult to imagine as a child. I lived an easy, peaceful life in rural Ohio. The moral ambiguities implicit in pacifism set in when, as part of Goshen (Ind.) College’s semester abroad, I worked in a Nicaraguan refugee camp’s health center tending the gangrenous wounds of Contra soldiers.

Listening to and cleaning the wounds of soldiers, some of whom had committed horrible atrocities against civilians in Nicaragua, where my brother documented such incidents with a group called Witness for Peace, was life changing. Before, good and evil had seemed like separate phenomena. But when you start to love people you disagree with, everyone starts looking a lot more like a human being doing the best they can with what they know and have experienced.

In the field of peacebuilding, we teach the skills and values of dialogue. We ask Christians, Jews and Muslims to sit together and share points of view. We ask Israelis and Palestinians to reach out across the political divisions. As a pacifist, it seems only natural to reach out to the U.S. military to understand different points of view and find common ground. Attending military conferences with a name badge identifying me as from “Eastern Mennonite University” leads to many interesting conversations about Mennonite pacifism. My military colleagues admire Mennonite humanitarian work around the world. But they are curious about our antagonism with the military, noting the many contradictions and ambiguities of pacifism circa 2010.

When I landed in Iraq in 2005 with MCC, local partners provided an armed guard to me as I facilitated a peacebuilding and development training. Shrouded in a black headscarf, I sought to blend in. I asked my hosts if I could ride in the bus with the other Iraqi participants rather than in the Land Rover with the armed guard. My hosts graciously explained that actually I would put them in more danger to do so. The armed guard, it seems, was deemed necessary for the safety of the Iraqi participants in the workshop. As a Westerner, I brought greater attention and threat to them. So I accepted the armed guard. Did this betray my pacifism?

When an armed gunmen went into a school, tied up Amish girls and started shooting, the Amish called armed police to stop him. That moment illustrates so-called “two-kingdom theology,” the belief that there is God’s kingdom, where Mennonites practice pacifism, and there is the secular kingdom, where we need armed police to maintain law and order. Is it pacifist to ask someone with a gun to come deal with a man threatening Mennonite youth?

The Taliban have been going into schools around Afghanistan and shooting girls. In Afghanistan, nearly all of MCC’s partners support a U.S. military presence training Afghan police to protect civilians from the Taliban. Is there a difference between Mennonites calling the police when they are attacked in their homes or schools versus Mennonites supporting a U.S. military presence and police force to prevent Taliban attacks on girls’ schools in Afghanistan?

Last year I spent an hour on a local talk radio program in Harrisonburg, Va., receiving hate-filled questions about Mennonite pacifists living in the Shenandoah Valley. Like some of my military colleagues, callers asked why Eastern Mennonite University will not fly the U.S. flag and why Mennonites are not willing to send their boys off to fight for the freedoms and privileges of living in this country. I explained how Mennonites risk their lives around the world, with equal sacrifice and dedication to the principles of freedom as military soldiers. But Mennonite pacifists have not communicated clearly our alternative versions of patriotism to show our love of the land we live in and the world we belong to.

Loving those condemning Mennonite pacifism means taking seriously their accusations of our contradictions and double standards. If the concept of pacifism is to be anything more than a quaint if naïve relic of the past, it needs some serious updating.

In its 90-year history, MCC has only lost one person other than Glen to direct violence out of 19,000 field workers. Most pacifism today calls for far less sacrifice than giving one’s life in a war zone to help people.

Perhaps Glen Lapp’s simple lifestyle as an avid bike rider and conscientious consumer says more about pacifism today than the loss of his life. Perhaps modern-day pacifism is about looking inward, at everyday choices of what we eat, wear, drink and how we transport ourselves in ways that respect land and people. Perhaps pacifism requires a tad less judgment of others we see as “harming” and more engaging our neighbors to build understanding and love for those different from us.

Lisa Schirch is professor of peacebuilding at the Center for Justice and Peacebuilding, Eastern Mennonite University, Harrisonburg, Va.