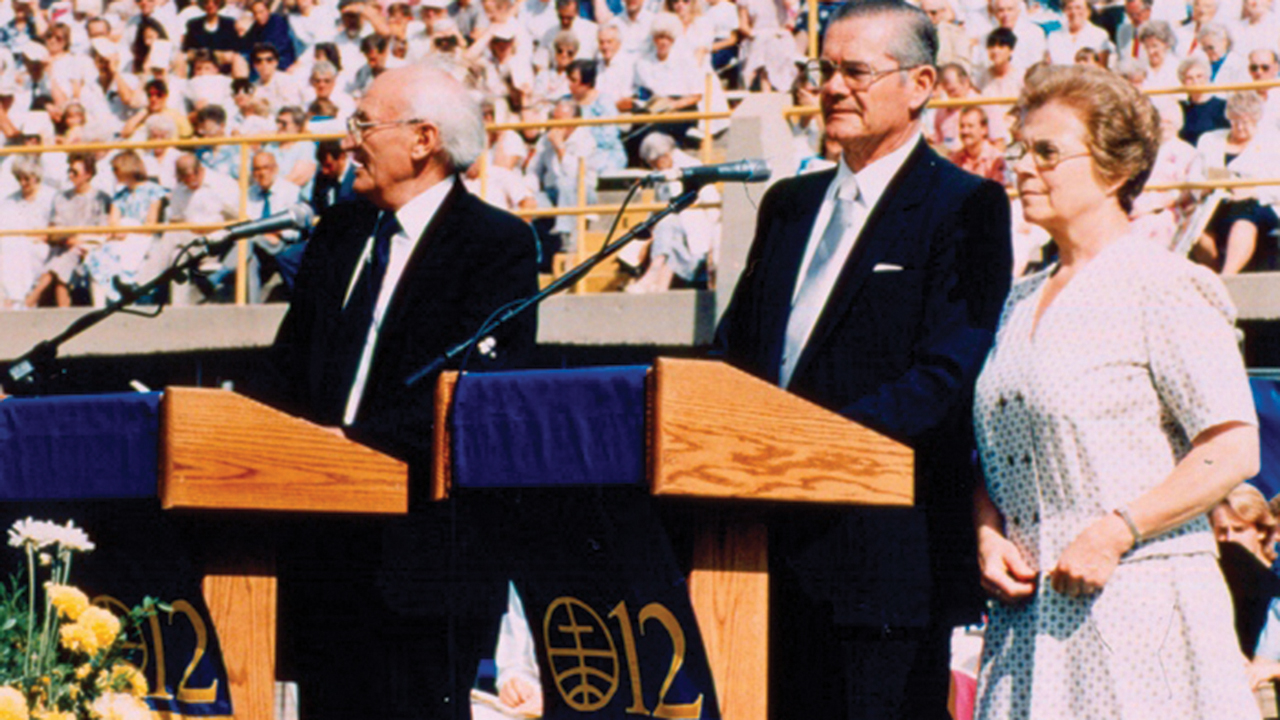 Raúl García was installed as president of Mennonite World Conference at the 1990 MWC assembly in Winnipeg. — MWC

Raúl O. García, 92, an Argentinian pastor and professor who served as president of Mennonite World Conference from 1990 to 1997, died Oct. 30.

The first MWC president from Latin America, he was installed at the 1990 assembly in Winnipeg, Man. He had not expected to be elected president but said, “If the Lord has put me in this place, he will help me with the grace and wisdom needed.”

Born Aug. 26, 1930, in Argentina, he converted as a Mennonite from a Catholic family at age 14. His pastoral gifts were recognized, and 10 years later he was appointed assistant pastor at Iglesia Evangélica Menonita Pehuajó, in a city inland from Buenos Aires, Argentina.

The next year, he graduated from university as a translator and teacher of English and left for the United States to study at Goshen College Biblical Seminary.

There he reencountered Anita Schwartzentruber, daughter of missionaries in Argentina, and they were married July 28, 1956.

They returned to Argentina, where he took up pastoral leadership at Pehuajó again in addition to teaching English in high school and later serving as director.

He played a major role in the development of biblical-theological education for South American leadership. Over the years, he served as board chair of the Mennonite Seminary in Uruguay and Paraguay and board chair of the Argentine Evangelical Mennonite Church Conference.

He authored I Am a Christian Evangelical Anabaptist in English and Spanish.

In 2004, Goshen College awarded him and Anita the Culture for Service Award.

Garcia “presided gently over MWC during a period of historic change in the Anabaptist-Mennonite world and corresponding changes in MWC,” said Larry Miller, MWC general secretary from 1990 to 2011. “In 1994, for the first time, the Mennonite and Brethren in Christ family numbered more members in the Global South than in the Global North, inspiring MWC’s initial steps from ‘conference’ to ‘communion,’ the establishment of the Global Church Sharing Fund, a reconceptualization of the global assembly and more.

“In his first message as MWC president, addressed to the 32,000 people gathered in the Winnipeg stadium — probably the largest gathering of Anabaptist-Mennonites in history — Raúl spoke from his heart as he so often did: ‘If we have been faithful, there is joy in heaven for each one of us who has been a witness.’ Raúl has been a witness. Raúl has kept the faith.”

Garcia is survived by his wife and three sons.