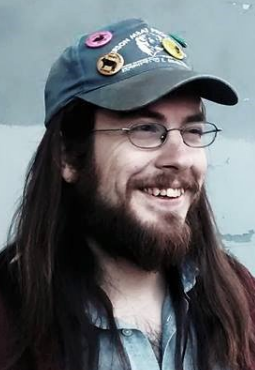 I moved to Elkhart, Indiana, a little over six years ago to study at Anabaptist Mennonite Biblical Seminary. When I graduated, I decided to stay here because of the vibrant community I had found. I live now as a member of a housing cooperative known as Prairie Wolf (after our two streets, Prairie Street and Wolf Avenue). We’re committed to building our community here and keeping our housing costs affordable.

I teach mathematics at Pierre Moran Middle School, located just a few blocks from my home. Living near school, I see many of my current and former students around the neighborhood. I can’t go very far without hearing shouts of, “Mr. Kinder!” They know me as a teacher and a neighbor. Most of the time I enjoy this proximity, the blurring of my public and private lives.

Soon after I began teaching, I was curious to learn more about my school’s name, so I dug into some history books. The more I dug, the more Pierre Moran’s story wove itself into my experience of this place as a descendant of white settlers.

Pierre Moran was a Potawatomi leader who lived in the first half of the 19th century. He is remembered in my city for selling his section of land to Dr. Havilah Beardsley for $1,500 in 1831. That section is now downtown Elkhart. So someone-I’m not sure who-thought it would be good to finally (in 1962) get around to naming something after Pierre Moran, and the middle school was it (along with a nearby mall).

But we ought to remember Pierre Moran for more than that land transaction. His life traces the story of the western Great Lakes nations as American settlements expanded westward behind (and in advance of) American armies. He was alive when the balance of power in this watershed tipped away from the indigenous and their British allies, and toward the Americans. He did everything he could to stop the inevitable from happening.

He was part of the anti-settler coalition of tribes led and organized by the Shawnee brothers Tecumseh and Tenskwatawa in the first decade of the 19th century. Tenskwatawa, known as The Prophet, was an alcoholic, a man driftless and depressed in the face of his reality: his land and livelihood were being taken. He experienced a radical spiritual conversion, receiving a vision of a new reality, one in which the white faces and everything European had gone away. He stopped drinking and started spreading his vision along with his brother, the adept political and military strategist Tecumseh. Their movement grew and their headquarters became known as Prophetstown, located on the Tippecanoe River near present-day Lafayette, Indiana.

It was to Prophetstown that Pierre Moran was drawn. Attracted by the vision of a world scrubbed clean of European influence, inspired by the possibility of a return to the old ways and a rejection of anything resembling white culture. He encountered intertribal fellowship, new community, new ritual. A new world was coming, and he would be here to usher it in. He would go to war for it if he had to. And he did have to: at what we know as the Battle of Tippecanoe, when in 1811 William Henry Harrison, governor of the Indiana territory, led an army against the encampment, defeating the native coalition, burning Prophetstown to the ground and scattering the people.

Pierre Moran survived the battle, but imagine the spiritual impact of the defeat. It was the end of a vision, the end of the world.

He lived the last 30 years of his life resisting white advancement, even going so far as to lead a Potawatomi surge and lay siege to Fort Wayne, Indiana.

Many of his contemporaries emigrated west or north to Canada, but Moran remained in Indiana. He had to recognize at some point the inevitable future ahead, when the Europeans would take all the land he had ever known and more, when he could no longer roam from camp to camp as a semi-nomad, when the vast Indiana prairie would be plowed and sowed in corn and wheat, when the buffalo would no longer roam this side of the Mississippi. In the face of this broken future, Pierre Moran is said to have been taken by the white man’s whiskey. He remained a leader in his community, signing his name to several important treaties, ceding Potawatomi lands to the U.S. in exchange for reservations of land, food, and paltry annuities. It was one of those reservations that he eventually sold to Dr. Beardsley.

Pierre Moran lived out his days in a grove near Lafayette, named today Parrish Grove after his Potawatomi nickname, Pierish. He preferred to sleep up in the trees, building a sleeping platform for himself. The story goes that one night, possibly drunk, he accidentally fell from his platform and died.

At Pierre Moran Middle School, we call ourselves the Warriors. There is a double irony here. The only battles our namesake ever fought were against the United States, against the advance of the American dream into these lands. And yet, I teach in an education system whose purpose, according to many, is to prepare young people to be Americans, to be American workers and American dreamers.

The other irony in our Warriors moniker is that in the only major military battles Pierre Moran ever fought, he was soundly defeated. But maybe the story fits us, too. I look at my students, at my coworkers, at myself, and I see us being beat down by state regulations, tax policies, a barrage of standardized tests, violence in our communities, violence in our homes, brokenness that won’t leave us alone.

Eighty percent of my students are people of color growing up in a country founded on racism. Is their outlook any better than Moran’s was in 1830? How are my students also being defeated by the state? How are these little black and brown warriors being outgunned today?

There’s a beautiful tulip poplar tree in the courtyard at Pierre Moran Middle School. I’m afraid to let my students climb it.

For more reflections on Fidelity of Place, check out the November issue of The Mennonite magazine.