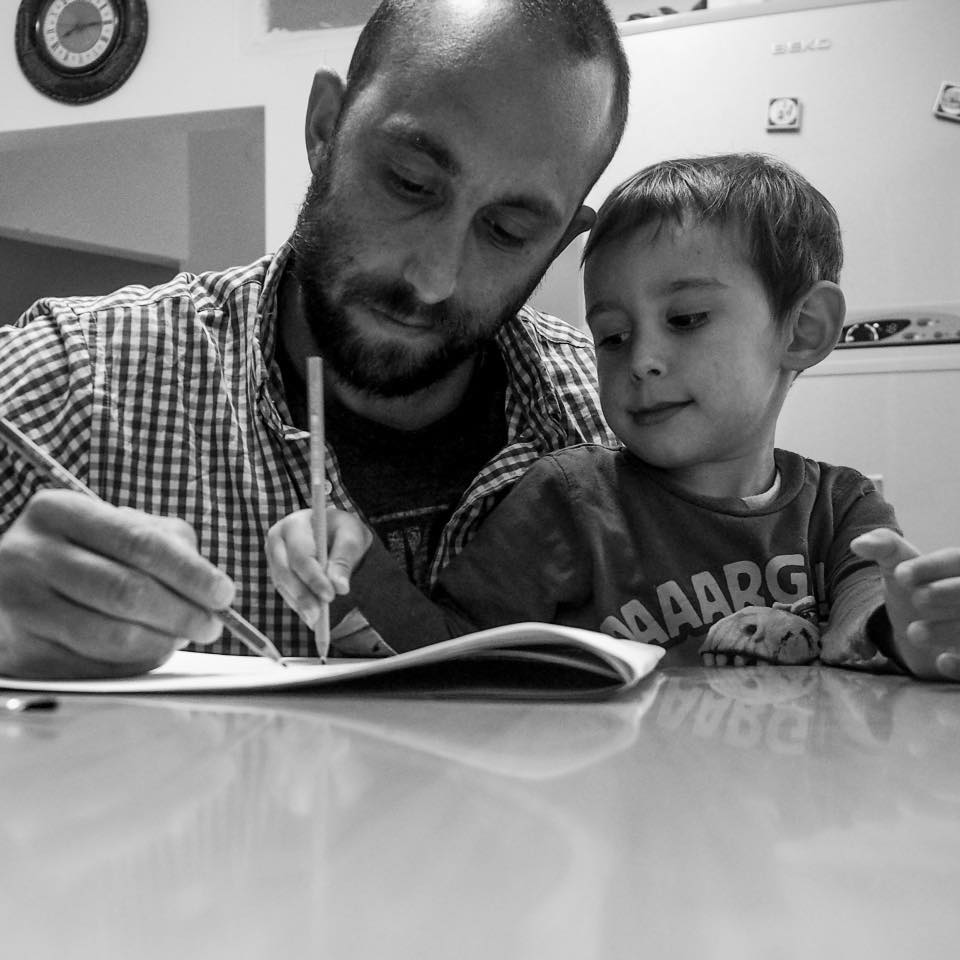 Cody O’Rourke has been working in Israel-Palestine on and off since 2005 with the Israeli Committee Against Home Demolitions, Christian Peacemaker Teams and the Hebron International Resource Network. He is the father of an Israeli Jewish son and he lives in Bethlehem.

The New York Times’ recent coverage of a bus fire in Jerusalem reminds us how important it is to be actively engaged in the narrative that shapes our collective understanding of the Israeli military occupation.

This article doesn’t mention the military occupation once. However, it does mention Hamas five times, tunnels 11 times, and excludes mentioning the innocent Palestinians injured on the bus.

The author of the article, Isabel Kershner, doesn’t miss out on an opportunity to paint a picture of Israel being under siege and facing an existential threat. Some have been highly critical of her work and her ability to report objectively on the conflict, because of her husband, Hirsh Goodman’s, prominent role in recreating Israel’s image.

In a 2014 article in the New York Times, her husband Goodman compared apartheid in Israel to apartheid in South Africa, and had the audacity to write:

“[In South Africa], Masses of black people were forcibly moved from tribal lands to arid Bantustans in the middle of nowhere. A ‘pass system’ stipulated where blacks could live and work, splitting families and breaking down social structures, to provide cheap labor for the mines and white-owned businesses, and a plentiful pool of domestic servants for the white minority. Those found in violation were arrested, usually lashed, and sentenced to stints of hard labor for a few shillings per prisoner per day, payable to the prison service….None of this even remotely exists in Israel or the occupied territories.”

Hirsh completely disregards Israel’s matrix of control, the almost absolute impunity with which Israeli settlers living in illegal settlements operate, the separate legal systems for Israelis and Palestinian, the housing permit system for Palestinians, the ethnic bypass roads, the Apartheid Wall and much more.

Israel is an apartheid state. That much is obvious to anybody who has been through East Jerusalem, the West Bank and Gaza. Or more simply put: To anyone who has tried to understand life through the eyes of the Palestinian.

It’s hard to differentiate Kershner’s agenda from her husband’s in The New York Times. She recently covered Israel’s discovery of a Jewish terrorist unit in the militarily-occupied West Bank. In her article, she refuses to use the word “occupation”, and uses the word “terrorist” once. In describing the illegal Israeli settlements, which are constructed on Palestinian land as a means of ethnic cleansing by pushing the indigenous population off their land, she simply uses the word, “unauthorized”.

The work of these two authors, Kershner and Goodman, in arguably the most influential newspaper in the United States, actively avoids allowing readers to know the truth of Israel’s brutal, ongoing military occupation.

You may be asking why a few New York Times articles are relevant to the Mennonite Church. The writing of Kershner and Goodman, and their suppression of the realities on the ground, has been used by prevalent voices within the church working to derail meaningful steps that Mennonite Church USA could be taking toward peace and justice in the Holy Land.

In an article published in October 2015, shortly after the Mennonite USA convention in Kansas City, Mennonite World Review published an article by Philipp Gollner, Andrew Elias Ramer, and James Regier, in which they make no reference to the real-life violent and oppressive conditions for Palestinian communities. They are, however highly critical of the Boycott Divestment and Sanctions (BDS) resolution that was ultimately refused a vote [by delegates at convention]. Like the reporting of Kershner and Hirsh, the trio of Gollner, Ramer and Regier not only refuse to use the word “occupation;” they continue to paint a picture of it being a symmetrical conflict, sometimes even crossing the line and portraying Israel as the victim.

This is important for the Mennonite church, a church that has had an active presence in the Holy Land for decades, and an historic peace church. How is it that a peace church failed to pass a boycott, divestment, and sanctions resolution at the last convention? It is important that the church take an active role shaping the contours of conversation that properly represent the plight of the Palestinian people.

I have worked in Israel-Palestine on and off for over a decade, working with the Israeli Committee Against Home Demolitions, the Hope Flowers School in al-Khadr, the Lajee Center in the Aida Refugee Camp in Bethlehem, and Christian Peacemaker Teams in Hebron. I have an Israeli-Jewish son who was born in Jerusalem, and am raising my son in Israel-Palestine. I was raised in the Church of the Brethren who, like the Mennonites, is one of the historic peace churches. With all of these experiences, I feel called to speak to the truth of Israel’s military occupation of the Palestinian people and the Mennonite Church’s moral obligation in response to the passage of the “Saturday Resolution,” in which MC USA vows to learn more about Israel-Palestine.

The rise in violence across Israel-Palestine needs to be put into the context of Israel’s violation of human rights, international law, and the environment that Palestinian communities are expected to be able to live their lives. Much can be said about child detention and imprisonment; the systematic abuse that is perpetrated by Israeli forces; the arbitrary use of closed “military zones;” the deportation of human rights workers, collective punishment in terms of home demolitions, the ongoing illegal siege of Gaza, extrajudicial killings, and the continued expansion of Illegal settlements.

For myself, one of the most disturbing components of Israel’s strategy of managing their “demographic problem,” is administrative home demolitions. These home demolitions are the destructions of homes that, in theory, are not intentionally punitive. The reasoning instead is that the demolitions are because of zoning regulations or building permit issues.

Families who have no allegations of criminal activity or affiliation with specific political actors can have their homes demolished at nearly any time. In the course of my work and life here I have rebuilt many Palestinian homes, including the famous Beit Arabiya house, the recent homes destroyed in demolitions in Um al-Khair, and the Hathaleen family’s home.

I was there just a few weeks ago and saw my friend Bilal Hathaleen, who lives in Um al-Khair. He paused for a

moment, taking a break from clearing the remains of a demolished house, cheerfully yelling from afar, “Cody!” Bilal, who I first met a little over a year ago, wanted me to see how much his son, Mohamed, had grown. I would have understood if his greeting hadn’t been so cheerful. Just the day before (April 6, 2016) the Israeli military-again-came into the village of Um al-Khair and demolished a large portion of their village, six homes this time. Thirty-six Palestinians are now without shelter. Most of the people living in those houses are children who are now homeless. Bilal could have been angry, jaded or despondent and it would have made all the sense in the world. But he wasn’t.

Maybe it’s because of the long history of home demolitions in Um al-Khair, or perhaps because forced displacement has been one of the defining characteristics of Israeli state policy since 1948. The village of Um al-Khair was settled by Bedouins after the Nakba, the 1948 expulsion of some 400-500 Palestinian villages from their historical land by Jewish paramilitary forces, and the eventual creation of the State of Israel. They are a community that knows displacement, a community that is intimately acquainted with the slow, methodical process of ethnic cleansing as but one means for the “Judiazation” of the land.

Since the establishment of the illegal Israeli settlement of Carmel in 1981, the villagers of Um al-Khair have had their village razed multiple times. Their homes and livelihoods were demolished in 2007, 2010, 2014, and again just last week.

Ethnic cleansing was and is the modus operandi as laid out in the infamous Plan Dalet: the military doctrine that defined the objectives of the Jewish paramilitary units during the initial formation of the state. The principles in Plan Dalet helped shape official Israeli policy and continue in practice today. Plan Dalet represented just one means to “deal” with the indigenous population, the Palestinians. The guiding principles are encompassed in the 1945 Emergency Regulations, the legal framework for the justification of home demolitions which are renewed year after year.

For Bilal, his son, and the villagers of Um al-Khair, there is little distinction between 1948 and 2016. For over 60 years, Israel’s military occupation has been grinding on, unabashedly. But you wouldn’t necessarily know that from some of the voices in the New York Times or from some in the Mennonite community.

Moving forward in the church

While the church provided guidelines for moving forward in working towards peace in Israel-Palestine, the Saturday Resolution (which was put together and submitted abruptly at Kansas City) is lacking substance. Here are some concrete steps that individuals can take to help congregations move in a positive, action-oriented direction towards peace.

After decades of Mennonite presence in the Holy Land, the church needs to find a way to transition from promises of prayer and lamentation; it’s time to take steps that lead to tangible change. Palestinians and Israelis alike need you to take action. It’s essential for both Palestinians and Israelis that we take those steps for a healthy future-a future that my 4-year-old can be proud of.

Supporting BDS is the step that historic peace church MC USA needs to take right now to play its part.

Watch an interview with Tarek Hathaleen, conducted by O’Rourke, after Hathaleen’s village was demolished:

The views expressed in this opinion post do not necessarily represent the official positions of The Mennonite, the board for The Mennonite, Inc., or Mennonite Church USA.