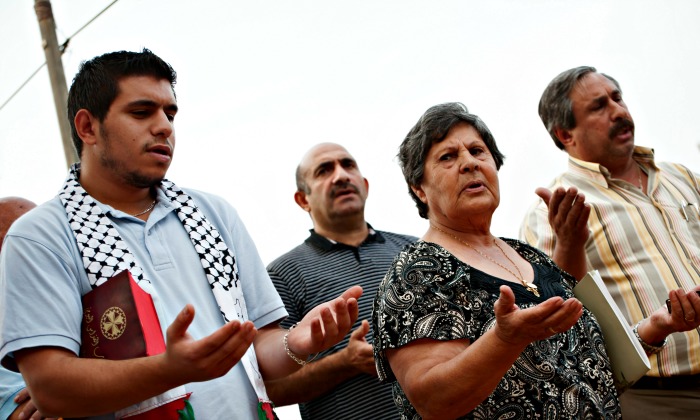 Photo: Palestinian Christians lift their hands in prayer during a weekly service held as a nonviolent witness against the Israeli separation barrier in the West Bank town of Beit Jala, November 2, 2012. Photos by Ryan Rodrick Beiler

Last week, delegates at the Mennonite convention in Kansas City voted to delay action on a Palestine-Israel resolution that called for “withdrawing investments from corporations known to be profiting from the occupation and/or destruction of life and property in Israel-Palestine.”

Some delegates voiced concerns that the resolution was “one-sided.”

In one sense, they are right.

If you want to hear the side of those advocating violence, read the newspaper or watch television news. That side gets plenty of ink and airtime. Those who say “peace, peace” but do nothing seem to get a decent share as well.

Here are the voices of Palestinians and Israelis who have dedicated their lives to working for a just and lasting peace.

All of them have met with Mennonite delegations and value these ongoing relationships. But they offer strong words of admonition in response to the events of last week. As he did in Kansas City, Rev. Alex Awad gets the last word.

“Your presence and work in Palestine has always reflected your strong sense of justice, your dedication and compassion for humanity, your sound theology of human beings created in the image of God. What went wrong? I do not know the extent of your church’s investments in companies that support the occupation or the intimidation methods that have been used, but I am appealing not to the economic aspect but to the moral obligation of a church, and now more than ever.

I pray that this setback will only double the efforts of your delegations to come and see, and continue to work. It seems that the hearts and minds of many are still closed and we all need to work harder. We still do not know the things that make for peace. Despite the disappointment, the MCC will remain a model of service and I assure you that we do not bear any grudges. We do not give up and hope that the Mennonites may have stronger methods of pressuring the Israeli occupation to end.”

“The Mennonite church has a history of making moral lead decisions, and I have personally met with many concerned Mennonites, horrified by the realities of Israeli occupation. That is why I am disappointed by the choice to table the resolution on divestment from the Israeli occupation. This is a decision to continue actively supporting the occupation, and can’t be seen as the default while the matter is deliberated within the church.

“I have always been impressed by the commitment of the Mennonites to peace and justice—by their insistence on living their values. So the decision to postpone the vote for two years over one of the greatest instances of injustice in the world, and in the Holy Land no less, surprises me.

I’m aware that the Mennonites are a diverse community, but given their religious tradition and values, their own bitter experience with persecution and their historic commitment to materially advancing peace and justice, I have to say I’m disappointed. There seems to be a fundamental “justice gap” here between Mennonite worldviews and actions.”

“It has become clear to those of us working in the field that engaging in superficial co-existence projects with no foreseeable end merely creates false hopes of peace and impressions of possible safety and security. For co-existence initiatives to be useful, it is vital that both sides recognize and work for human rights and share the values of equality, peace and justice.

This position has received support in recent years by the growing BDS (Boycott, Divestment, Sanctions) movement. Started in 2005 by 171 Palestinian civil society organizations, its broad aims are to pressure Israel to end the occupation, allow refugees to return home, and stop racism and discrimination against Palestinians living inside Israel. … The goal is to produce real progress rather than empty dialogue that goes nowhere.”

“I find it difficult to, on the one hand support refusal [of military service], which is very much in the vein of Mennonite beliefs, and then on the other hand to witness their inability to be brave enough to make such an important decision which is detrimental in saving lives and ending war. More of the same just doesn’t seem to be much of an option from where I stand.

In my heart I believe that without pressure on Israel from the international world, whether it be financial or about changing the government’s human right policies, without holding Israel accountable, change will not come about. We have to work together. Activists within Israel must persevere and be diligent, where as at the same time we need a growing voice of support from the world around us.”

“At the end of the conference, I was asked to speak for five minutes to all delegates. Just before I spoke, they passed a new unanimous resolution to study the situation, including a serious study of the Kairos Document, with more study tours of the Holy Land. So when I shared, I did not feel like scolding the delegates but rather to encourage them to commit to what they have decided. I spoke about our long history of partnership with the Mennonites and how much we Palestinians appreciate MCC and all they have done for the Palestinians through the years. When I left the podium people came to hug me with tears in their eyes. I believe Mennonites left the conference with a serious commitment to learn more about the aggression that is taking place against Palestinians and to do all they can to stop it.”

Ryan Rodrick Beiler is a freelance journalist living in Oslo, Norway. He worked with MCC in Palestine and Israel from 2010 to 2014.