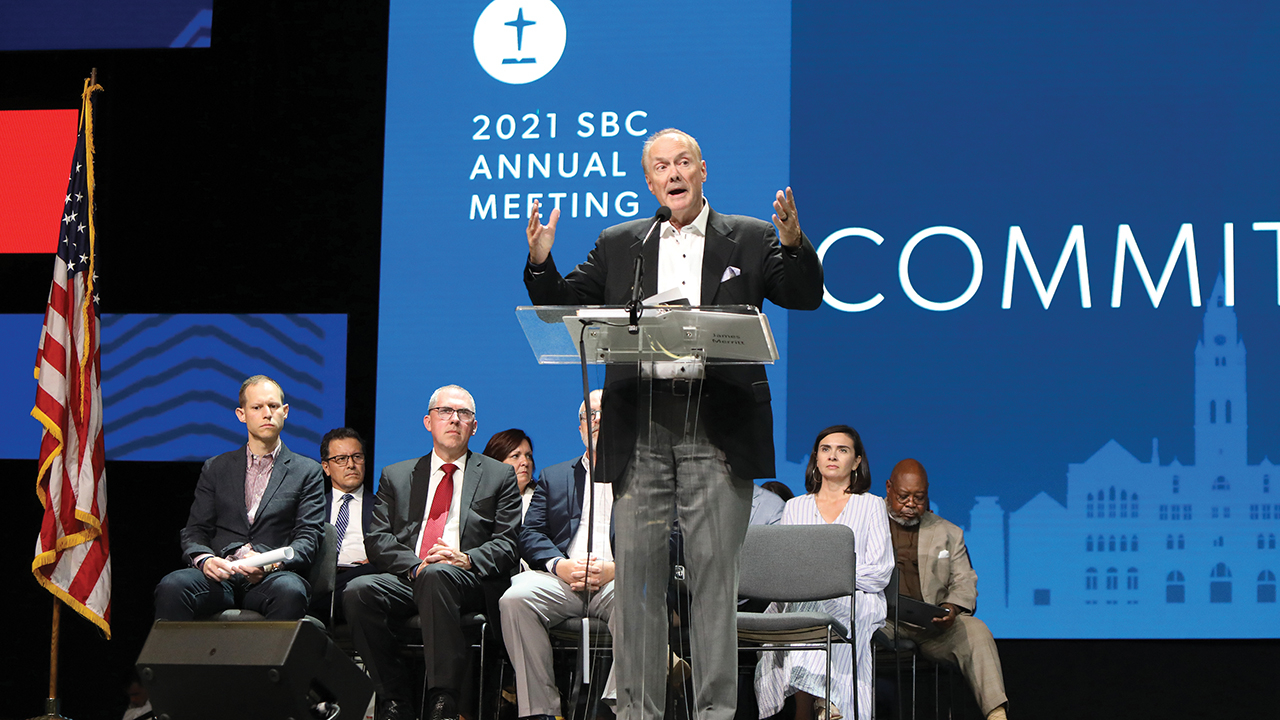 Messengers to the Southern Baptist Convention’s annual meeting directed the denomination’s new president, Ed Litton, to set up a task force to address concerns that SBC leaders have mistreated abuse victims and mishandled allegations of abuse.

The request for the task force came on the day after Southern Baptists adopted a resolution that stated the messengers believe “any person who has committed sexual abuse is permanently disqualified from holding the office of pastor.” They also recommended Southern Baptist churches apply this standard to all church leaders.

Concern over sexual abuse had dominated conversation leading up to the annual meeting, which drew more than 21,000 people to Nashville’s Music City Center, including 15,726 messengers, or delegates.

In early June, leaked letters from former SBC ethicist Russell Moore became public. Those letters included allegations that abuse victims had been mistreated by leaders of the Executive Committee. A leaked “whistleblower report” included an audio clip of Executive Committee president Ronnie Floyd saying he was not concerned about what abuse survivors say about the SBC’s response to abuse.

“I am not worried about that,” he said. “I’m thinking about the base. I just want to preserve the base.”

A recent report from Rehoboth Baptist Church in Georgia also alleged SBC leaders had failed to look into allegations of abuse against a former staffer at the church who had moved on to allegedly abuse children at other churches. Executive Committee staffers have also been criticized for mishandling the case of abuse survivor Jennifer Lyell. A leaked email from a former Executive Committee staffer referred to abuse advocates as being misled by the devil.

The task force approved by messengers had a wide mandate.

The task force “shall ensure that the third-party review includes an investigation into any allegations of abuse, mishandling of abuse, mistreatment of victims, a pattern of intimidation of victims or advocates, and resistance to sexual abuse reform initiatives,” the motion for the task force read.

One of the hot-button items expected to be on the agenda was critical race theory. About a quarter of the 40 resolutions submitted were related to CRT, race or racial reconciliation.

But, in the end, the statement the resolutions committee chose to bring to the floor for a vote did not mention CRT, an academic approach to understanding systemic racism. Resolution 2, “On the Sufficiency of Scripture for Race and Racial Reconciliation,” was overwhelmingly approved, though a few messengers pushed back on it.

Kevin Apperson, a Nevada pastor, stepped to a microphone to declare that he had “flown a great distance to address an ideology which tells me that I am inherently guilty because of the melanin content of my skin.”

After Apperson’s remarks were greeted by a loud “amen” and applause, James Merritt, chair of the resolutions committee, stood his ground.

“If some people were as passionate about the gospel as they were [about opposing] critical race theory, we’d win this world to Christ tomorrow,” he said, also drawing cheers and applause.

In 2019, delegates approved a resolution that said CRT could be used as an analytical tool “subordinate to Scripture.” Two years later, there were calls to rescind the 2019 statement.

But James Jordan, general counsel for the SBC, said all attempts to revoke previous resolutions were out of order because “while the messengers are completely free to express their own opinion, what they cannot do is nullify the fact that a previous group of messengers expressed their opinion.”