On Wednesday morning at 3:33 a.m., Charletta woke up and said that she had heard a noise. I blearily nodded. She was gone for a minute or two and I tried to go back to sleep. Then she came back and said, “I think there’s a bullet hole in the window.” Hmm, I thought, that’s unexpected. My brain gradually began to wake up.

I walked out into the living room and woke up all the way (or as much as is possible at such an hour). Our apartment is on the fourth floor, so the bullet had come in through the window and gone out the ceiling 4 feet away. It had plowed through a tight stack of venetian blinds which had exploded across the room, leaving little white pieces of plastic on every visible surface.

After a little bit, the police showed up and dutifully remarked on the high caliber of the bullet given the size of the hole. This sort of incident was a relatively rare happening in our neighborhood, they said. Probably someone shooting into the air. After making some small talk about the architect who designed the office building where my housemate works, they left. I ate some oatmeal and went back to sleep. 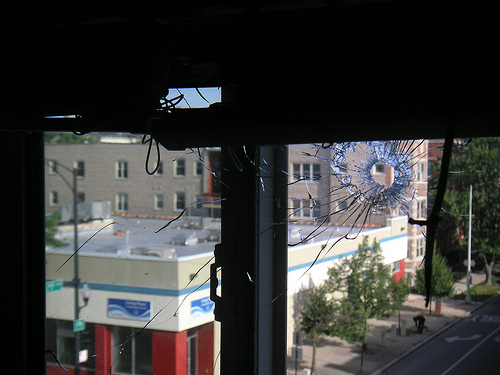 The next morning, Charletta sent out an email to Living Water folks. Four friends from church showed up within half an hour, two to drink tea and talk and two to help clean up. It is incredible to live in a space and place where an incident of random violence becomes a reminder of the loving community that surrounds us. We feel deeply blessed.

The happy epilogue to the story involves the Philodendron climber vine that has been working its way around our living room window ever since we moved into the apartment two years ago. You can see the vine running along the canning jars in this photo of strawberry jam jars. It had made at least two circumnavigations of the 10 feet by 5 feet bay of windows and probably reached at least 25 feet long. A bit out of control really. The pieces of glass from the window (and perhaps the venitian blind) did our long overdue pruning for us. And in the process. created a half a dozen new starter vines for us to share with our friends. We’re calling it Resurrection Vine: 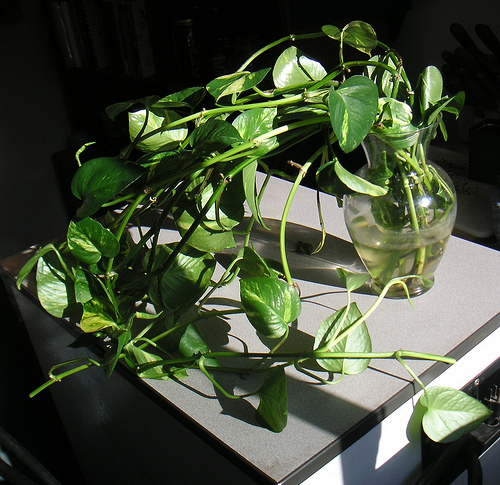 So if you happen to be in the area and would like a Resurrection Vine in your home, stop by in a few weeks when they’ve rooted and pick one up!

P.S. I decided not to take this opportunity to vent my anger at gun manufacturers and their supporters. See Altar of the Gun for my thoughts along those lines. I wonder if some of the commenters on that post would have recommended that we jump out of our beds and return fire through the window?