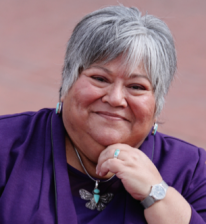 David Bowie died last month, a multiinstrumentalist, singer-songwriter, record producer, painter and actor. But he was not just a musician or actor; he was an artist, quirky and unpredictable. He thought outside the box. You may wonder why I’m writing about David Bowie. It’s because he represented a true artist, a creative soul.

Working in the church these past few years has been brutal on many fronts. We’ve dealt with inclusion, racism, sexism, sexual abuse, immigration and deportation. Some days I want to walk away and find a secluded cabin up in the mountains where no one can find me. I wish I had a magic wand to make everything right.

With the church in such flux many wonder about its future, where we go from here and how much more can we carry as a church?

In order to build up the church, we need people like the quirky, creative soul David Bowie. Even when building peace, we need artists. We need someone unafraid to imagine something different, unexpected and contrary to the norm.

In John Paul Lederach’s book The Moral Imagination, he writes: “The moral imagination requires the capacity to imagine ourselves in a web of relationships that includes our enemies; the ability to sustain a paradoxical curiosity that embraces complexity without reliance on dualistic polarity; the fundamental belief in and pursuit of the creative act; and the acceptance of the inherent risk of stepping into the mystery of the unknown that lies beyond the far-too-familiar landscape of violence.”

Our future as a church can no longer rely on patterns that pit brothers and sisters in Christ against each other as enemies, putting ultimatums on complex issues as either/or and using violence in our writings or how we speak to each other. We must find a creative way of rebuilding our church on what it can become in an environment of love that nurtures creativity. Negativity and hate will only produce violence, which we Anabaptists say we abhor so much.

This issue (the February magazine) includes an article on the Doctrine of Discovery, a project I am involved in. A complex system and set of laws was created to dismantle indigenous ways of life here in the United States and around the world. It allowed resources once held in common to become privately owned by individuals or corporations. Christianity was used to sow destruction and sided with the government. We are just beginning to understand what the actions of our ancestors and ourselves today have done to countless Native American tribes, many no longer with us due to the bombardment of their way of life by European settlers.

Like issues of racism, the conflict within our church, deportation of immigrants and the dismantling of the Doctrine of Discovery will take our “moral imagination.” We will need to sit at the table with those we have wronged and imagine a new future. We will need to let go of what we think we know and embrace the mystery not yet revealed so that we can embrace “just” peace.

But in order to let go and embrace the mystery, we need to be encouraged and challenged by the artists, poets and musicians among us. We must welcome them to be part of the work we do, whether it’s working with immigrants, systemic realities like racism, the Doctrine of Discovery and even into our conflicts as a church. We need to hear poets paint pictures with words that help envision a different future, paint for us in words what seems impossible to help us envision what is possible. We need to hear the music and words of musicians who help shape our way of seeing the world.

In the late ’60s and early ’70s, the music of Pete Seeger had a profound influence, using folk music to frame important questions for us to reflect on as we fought a war as a nation that begged for an answer to the question why.

We hunger for the artists, through their various media, to inspire through beauty and troubling images. We need them to unsettle our complacency and inspire us to act. God has gifted us with artists, musicians and poets, and we must find ways to use them more so that we can embrace God’s mystery as an act of faith that we can make the impossible possible as we walk with God.