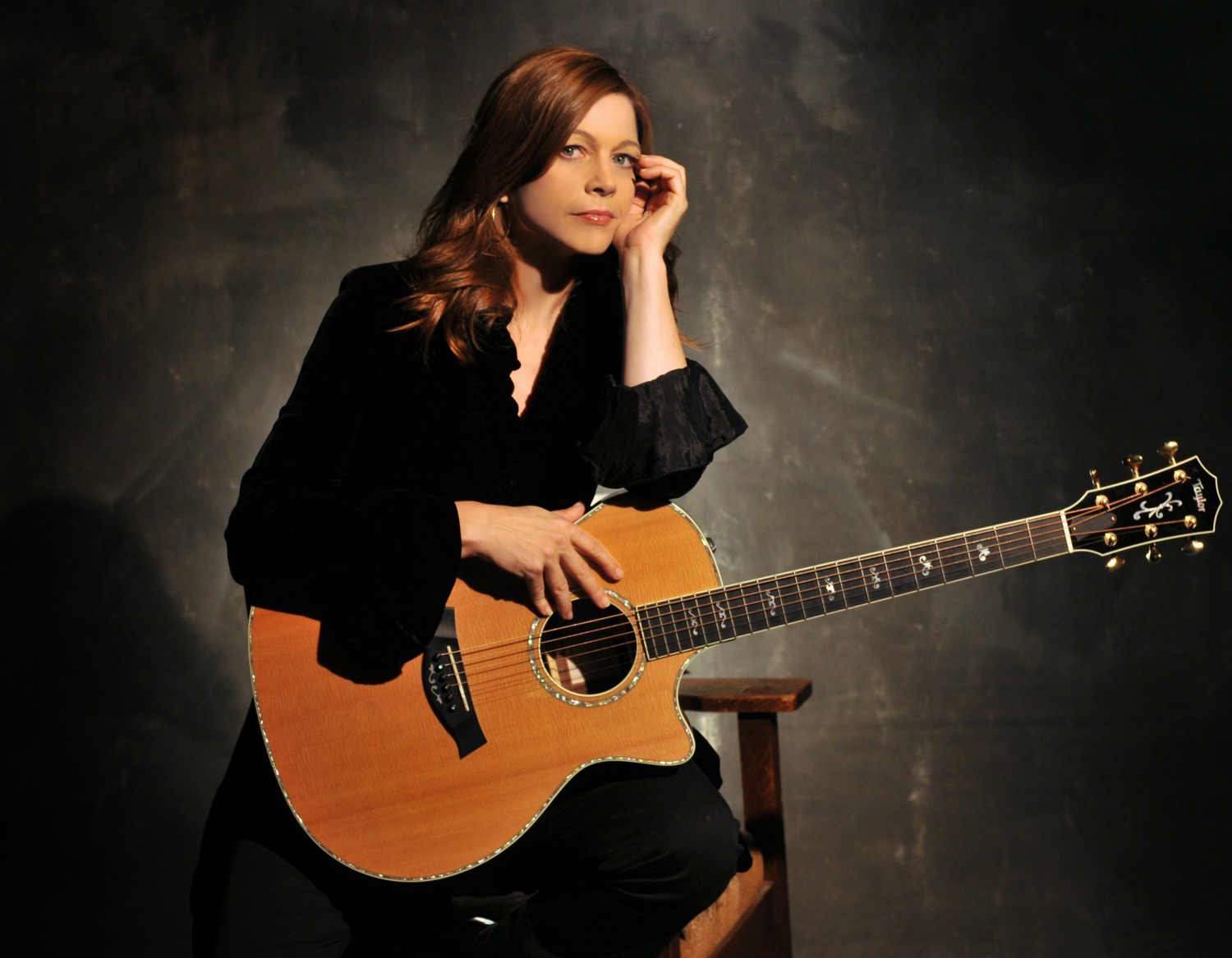 Author, poet, singer, songwriter and Goshen (Indiana) College alum, Carrie Newcomer, visited with Hannah Heinzekehr, executive director of The Mennonite, Inc., about spirituality, news, art and her top five most influential artists. You can listen to a playlist inspired by their conversation below.

Hannah Heinzekehr: As it turns out, you are the most cited artist on past “Top 10” playlists that individuals have developed for The Mennonite. And recently, Sara Wenger Shenk, president of Anabaptist Mennonite Biblical Seminary, used your song “You Can Do This Hard Thing” as the inspiration for a blog reflection about the ways the church is working at finding its calling together.

Carrie Newcomer:  Oh my! That’s pretty wonderful to find out. That song was one that came about in conversation with Parker [Palmer, a Christian writer and author who collaborated with Newcomer on her latest album]. To say, “you can do this hard thing,” acknowledges that what you are doing is not easy. Marcus Borg says that Christianity is at the place of biggest change in the last 500 years. And it feels seismic because it is. We’re on the cusp of a lot of things, and we’re reimagining and re-envisioning.

The work is not going to be easy and may not be linear. The rug might be getting pulled out here, and that’s tough. So it’s acknowledging that idea and at the same time affirming that we have everything we need to move forward.

The Mennonite community has a long history of literal songs and metaphorical songs that has brought that community this far. Its system stands for justice and peace in the world and for taking care of one another. There are so many beautiful things about the Mennonite tradition. You have everything you need. The question that is at the heart there is, How do I live a life of radical love? What does that mean today, in this world and at this time? You have everything you need to take the next step forward and into the unknown.

HH: So clearly you see your songwriting as spiritual work. Would you say that your music and your spirituality are inseparable, in some ways?

CN: There’s a spiritual current in my work because there’s a spiritual current in my life. If it wasn’t present in my work, I’d be censoring something. I’ve always written in a way that welcomed and was inclusive. But a Christian [music] label wouldn’t touch my music with a 10-foot pole. Theologically in commercial religious music you get eight theological crayons to work with and I’m kind of a 48-crayon kind of gal.

Let me say, there are some beautiful things that have been created with eight theological crayons. But often I hear spiritual themes coming across in all kinds of people’s work and in places where you don’t expect it.

I so appreciate that people will take the time to come to me after a show and tell me something: tell me a story or tell me about a song. I can’t even tell you how incredibly generous that is to me. You send out your songs and you don’t know where they land, you can only hope they land well and safely somewhere. And when someone says, “Yeah, it landed well and safely in my heart.” It just doesn’t get better. Except when they say, “And now I sing it!”

But people will tell me they either didn’t have any kind of spiritual background when they were growing up or they were raised in a spiritual tradition that wounded them. And I think there are a lot of people who are looking for authentic spiritual conversation that includes them and all the 48 crayons. Parker says that spirituality is a connection to something that is larger than oneself.

HH: You and Parker Palmer collaborated on your new album, “The Beautiful Not Yet.” Can you talk about how that collaboration emerge and what the process of writing together was like?

CN: If you lined up 11 songwriters and asked them about their process, they would give you 14 ways they write songs. My process generally starts with poetry or essays.…Poets and writers have had a huge impact on my songwriting.

Parker is one of my favorite authors and human beings on the planet. This last album came out of two years of working on a spoken word and music piece called, “What We Need Is Here: Hope, Hard Times and the Human Possibility.”

We had this idea of what is abundance here and what is abundance in a time when the world feels overwhelming. What is right here within us and between us that will save us? We’d get on the phone, talk and take notes, roll it around and email back and forth. It was really a couple years of this percolating. It wasn’t real linear.

HH: Could you have anticipated how timely the themes in this album would feel? It was released in September 2016, and this seems like a time when many people feel like the world and the news around us is overwhelming and represents a lot of deep brokenness in our world.

CN: Sometimes I think artists are sensing currents that are under the water. Parker’s book on democracy came out five years ago, and there are a lot of things in that book that were incredibly prescient.

There are a lot of people feeling pretty lost right now. Sometimes you reach out for something that looks strong, and that’s understandable. It’s kind of human. But how does that really jive with who you are and what your values are? Do you really want to teach your children to be a bully? Would you really want your boss to be a sexual predator? Would you really want someone in your community promoting and espousing hate speech and vilification of people who don’t look exactly like you do or don’t believe exactly as you do? With a lot of the songs from the album, I think we were sensing the undercurrents that were coming and percolating for a long time. You know, a sense of desperation by a lot of people in our society didn’t happen yesterday. It’s been coming for a long time.

HH: I wonder if you could reflect on other people or artists or songs, perhaps your top five, who have been influential in your writing and music?

CN: It’s as much artists as it is a particular song. It was really hard for me to think about a song. Usually it’s artists and what they are doing in an interesting, overview sense.

1. Joni Mitchell: She was one of my first singing and songwriting influences. She’s the quintessential confessional songwriter. Also because she was so interesting in how she did it. Her melody lines, the way she constructed her lyrics, were really fascinating to me. I’m not classically trained, and I always say that in some ways Joni Mitchell was my first vocal coach when I tried to sing her songs. What I was really doing when I sang those songs was interval training. I think she was really influential on a whole generation of women. She kind of gave us permission to be out there and creative and honest with our writing. She was bold, and at the same time she had this beautiful sensibility in her songs.

2. Paul Simon: I think in terms of consistent lyrical brilliance, he’s like the poet of the last couple of generations. He’s also gone through a lot of different phases. He began to incorporate world music into his arrangements. There were early songs that were really clear, beautiful, classic folk songs. And there’s a gospel one he did with Phoebe Snow. And the work he was doing with South African musicians. And now he’s been pulling from all of it. His last couple of albums have been really interesting. He’s over 70 and has consistently been one of the most amazing in terms of crafting songs and expanding who he was all the time. Those first albums that he did solo, I listened to a lot. And I sang those songs. There are interesting melody lines and ways he’s using the guitar.

3. Bruce Cockburn: Bruce is a Canadian songwriter, and when I discovered Bruce in my 20s, I really loved how he blurred the line of spirituality with his lyrics. He would have a spiritual context to his work but didn’t always hit you on the head with it. And activism was a thread through what he did. That was really inspiring and influential for me, too, and I learned a lot of his songs. And I learned a lot through his guitar playing.

4. Rickie Lee Jones: I listened to a lot of Rickie Lee Jones. And I sang a lot of Rickey Lee Jones as I was starting out. I always say that I picked up the guitar, learned three chords and starting writing songs. Her first album was just called Rickie Lee Jones. Then came Pirates. I just inhaled them. She had this kind of lazy sensibility: It wasn’t blues; it wasn’t jazz; she just kind of slid wherever she wanted to go. And I really liked that a lot. And so I learned a lot of her songs and learned how to use my guitar as a percussion instrument.

5. Songs of activism: I learned songs like “Eyes on the Prize” or “We Shall Overcome,” those songs of activism and songs we sing together in a way that sustains community. They became very important to me, too, pretty early on. These ideas of social justice and the music that went along with the ideas of social justice and how communities sustain through music has always been an important influence on what I do and how I think about it.

I was in India and got to work with community service organizations during the day, and in the evening I did concerts. One of the places they had me go was in South India. There was a home that a poet started for young girls and women who had been living on the streets. She gave them a place and an education and a chance. I was thinking to myself, What will I ever have to offer? These are women who have seen and experienced things we can’t even imagine. Who am I to come and sing?

There were 200 women and girls, and the first thing they wanted to do was to sing for me. And they wanted to sing “We shall overcome” in Hindi. And then they wanted me to sing it back in English. And we went back and forth singing this together. And it was like, We are not invisible, we are here, we are singing. And that’s an experience I’ve seen in so many places and so many different contexts. We are not invisible. We are here and we are singing.

Listen to a playlist inspired by Carrie’s music (and including some of her work):