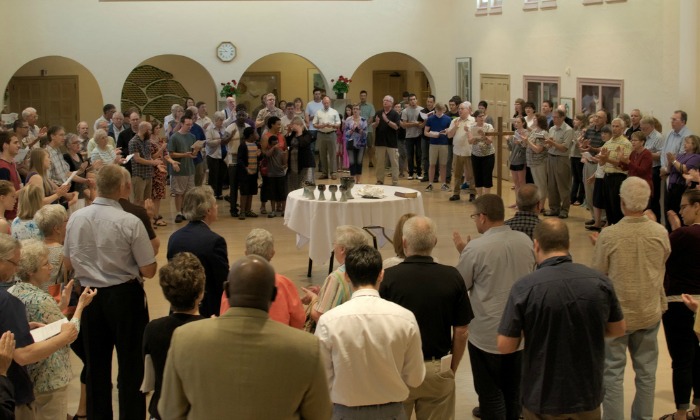 Can shared spiritual practices bind people together despite differences in theological beliefs?

At their annual meeting in June, members of Central Plains Mennonite Conference accepted a conference covenant of spiritual practices with 89 percent approval.

In addition to the spiritual practices, the covenant asks conference members to agree on a model for discernment when congregations are testing faith practices or changes in belief that are different from those currently held by the conference and Mennonite Church USA.

The discernment process identifies five steps, including a commitment to affirm how commonly held beliefs and practices, as well as new practices being considered, “bear witness to God’s intended purposes for the church and the world”; working with the Conference Board to design a process for discernment; committing to a process of biblical discernment with a peer congregation that embraces the conference’s current beliefs and practices; and be led in study and discernment by a teacher chosen in conversation with the Conference Board.

If a congregation has completed the process and is at variance with current conference teachings, the covenant calls on the conference to apply the “reasoning of Gamaliel” from Acts 5: “If their purpose or activity is of human origin, it will fail. But it is of God, you will not be able to stop these men; you will only find yourselves fighting against God.”

According to conference ministers David and Shana Boshart and Tim Detweiler, the development of this covenant model grows out of years of processing and discernment across the conference. Central Plains was one of the first integrated conferences to form through a merger of General Conference Mennonite Church and old Mennonite Church conferences.

“We chose to form CPMC before we agreed on everything,” says Detweiler, conference minister for ministerial leadership. “That was intentional. From the beginning, we have had to work at managing our relationships.”

CPMC conference ministers know their members hold a wide variety of beliefs on any number of topics, including women in leadership and inclusion of LGBTQ individuals, and they recognize there will likely be more disagreements in the future that the conference can’t even anticipate right now.

“We don’t minimize the importance of shared beliefs. We do expect us to have a lot of commonality. But that’s not enough in our current context,” says David Boshart, executive conference minister. “We were trying to imagine a method that will help us face the really complex challenges out ahead of us and navigate life together.”

At the 2015 annual meeting, delegates considered and gave feedback to a draft of the proposal and were sent home with a Bible study guide, written by Detweiler, for use in their congregations over the next year.

The conference ministers cite the biblical basis for a move away from contractual relationships and toward covenantal ones.

“Covenant calls us to a deeper way of relating and loving than we are currently practicing,” says Shana Boshart, conference minister for Christian formation. “It’s the way God relates to us and the way God calls us to relate to one another. Leaving and breaking relationship and separating ourselves from one another doesn’t work in the long run. It damages our witness and breaks relationship when what God is doing in the world is reconciling people to one another.”

Miller notes that the board was drawn to this model as they saw conflict taking a toll across the conference. In the last two years, 10 congregations have left the conference and Mennonite Church USA.

“This vision was an attempt with the board to say, What kind of conference do we want to be on the other side of this?” says Miller. “We don’t have a lot of control over what’s happening, but what do we want to call people to?”

Christ is Lord and Savior.” The IN-MI document also echoes the six spiritual practices and the discernment model utilized by CPMC.

At this summer’s assembly, delegates offered informal affirmation for continuing to explore the covenant model, and delegate feedback will be used to shape another draft of the vision document for delegates to review in 2017.

“Between now and next summer, we’re inviting congregations to live into this. We’re really hoping they will get involved in experimenting with spiritual practices and that we’ll have some stories to share with each other next summer,” says Miller.

Miller and Bob Yoder, current moderator of the Missional Leadership Team, which helped develop the vision, hope this process will build the level of investment and relationship among congregations and move the conference’s focus from variance to accountability.