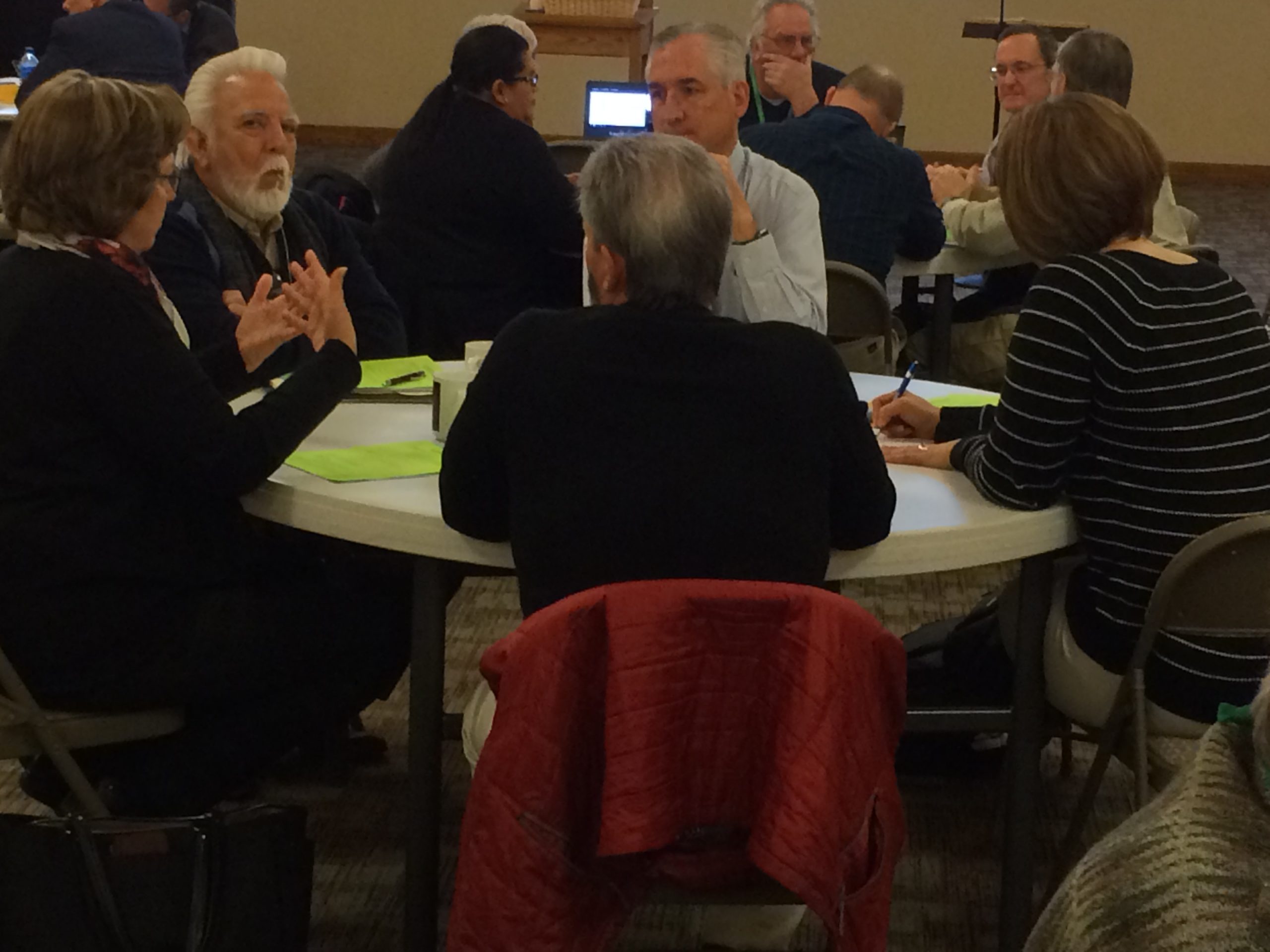 Meeting Feb. 28-March 2 in Hesston, Kansas, the Constituency Leaders Council (CLC) looked at the membership guidelines of Mennonite Church USA and responded to possible bylaw changes in anticipation of the MC USA delegate assembly in July.

Michael Danner, associate executive director for church vitality and engagement, read through the membership guidelines. Delegates at the 2015 assembly reaffirmed them, with the stipulation that no changes would be considered for four years. He asked CLC members to consider the question, What is the best way for MC USA to discern a process for the future of the guidelines together?

CLC, which consists of representatives from MC USA area conferences, agencies and racial/ethnic groups, is not a decision-making body but provides the MC USA Executive Board with feedback and recommendations, what Danner called “relational authority.” The EB is set to meet in early April.

Danner noted that “there is a distance between the official teaching positions of MC USA concerning same-sex marriage and the current practices of a growing number of pastors, congregations and conferences.” There are people on both sides and many in the middle, he said, and there are many nuances to the discussion.

He added that congregations and conferences continually ask EB why they don’t enforce the guidelines. Others ask when the guidelines will be dropped. Both sides are asking when we’ll address the tension between what we believe and what we do. “I don’t know of any conference minister that doesn’t deal with this tension,” Danner said.

Danner employed different methods for getting feedback from the 60 or so CLC participants, as they talked around tables. Out of the feedback, he listed eight recommendations, which CLC members then marked according to what their first, second and third choices and which should not be considered. He said he will tabulate all the feedback into a summary that EB can look at in April.

He emphasized, however, that this is a process. There are no plans to bring a resolution to this summer’s delegate assembly regarding membership guidelines, he said.

Other bylaw changes are planned for the delegate assembly, however, and Glen Guyton, executive director of MC USA, presented these for discussion.

Another proposed bylaw change was to eliminate The Mennonite, Inc. (TMI), as an entity of MC USA and instead brings its services under the EB. This change was tabled, however, due to developments on March 1.

That morning, Guyton, moderator Dave Boshart and moderator-elect Joy Sutter, who also chaired the CLC meeting, met with Barth Hague, chair of the TMI board. That afternoon, Hague spoke to CLC members.

He said the TMI board “remains committed to providing a forum for the many voices of MC USA and to offering an editorial perspective distinctive from but collaborative with other leadership voices across the church” and that the board and readers value the journalistic independence of TMI.

Further, he said, “we remain convinced that the best opportunity for continuing our mission with integrity is in combining forces with Mennonite World Review, whose mission, operation and readership are much the same as ours.”

As a result of the four of them meeting that morning, Hague said, “we agreed that it’s appropriate to put that merger option back on the table with a renewed commitment to negotiating the final terms of an asset transfer. Of course, this depends on the MWR board’s readiness to reconsider this option.”

That merger had been proposed last year, but the EB, after hearing caution from CLC, decided not to survey delegates about ending TMI as an entity, and the TMI board then withdrew from the merger. That discussion of the option is back on the table, Hague said, is “the good news of the day.”

Guyton presented a proposal for a collaborative communications strategy that would include a chief communications officer who coordinates resources in the various communications efforts of MC USA, developing strategies.

In other CLC business: