GOSHEN, Ind. — Bobby Switz­er did not grow up going to church or singing, but he has become passionate about hymns and congregational music since coming to Goshen College four years ago.

When he started the Goshen College Hymn Club in 2012, little did he know that he would end up singing through every verse of all 658 hymns in Hymnal: A Worship Book, in a 30-hour marathon of song.

At 7 p.m. Nov. 14, more than 100 Goshen College students, staff and community members gathered to begin the ambitious task of singing through the entire Mennonite hymnal.

Just over 30 hours later, after finishing the final hymn in the early morning hours, the group of singers decided to end on a good note with hymn number 118, “Praise God from Whom,” known affectionately as “606” or the “Mennonite anthem.”

Five students stayed the whole time and sang through the entire hymnal. More than 300 people came and went during the 30 hours of singing, and a live web stream received more than 4,000 hits from all over the world, including 37 different countries. 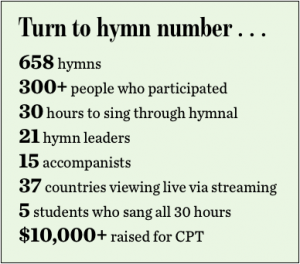 “You learn the hymnal in a different way when you sing through the whole thing,” said Switzer, a senior molecular biology/biochemistry and peace, justice and conflict studies double major from Berne. “You see the patterns, the way it flows, like a worship service. It was neat to share that experience with many people.”

Since Mennonites are known both for a cappella singing and peacemaking, the Hymn Club decided to ask for donations to Christian Peacemaker Teams. Churches and individuals were invited to support by pledging per hymn. More than $10,000 was raised, and more continues to trickle in.

“We thought, ‘If we’re going to do a big hymn sing, let’s go all in. Let’s go beyond singing just for the sake of it. Let’s use it as an opportunity to spread peace in this world of violence,’ ” Switzer said.

Switzer spent last summer serving through the college’s Service Inquiry Program at the Iona Community in Scotland, a Christian ecumenical community, where he helped visitors learn to sing while “pre­paring a space for people to find their voice.”

“Taking that idea back to Hymn Club was helpful,” he said. “Mennonite hymn singing can be exclusive, so we try to be more inviting. We shouldn’t have to abandon traditional hymns for easier or cheaper music.”

The purpose of Hymn Club, according to Switzer, is to create an inclusive space where people of all musical abilities can sing together, even if they’re out of tune.

“Singing is such an integral part of our identity,” said Joelle Friesen, a sophomore molecular biology/ biochemistry major from Normal, Ill., who is involved in Hymn Club. “When you sing, you’re unifying people.”

According to Switzer, the most difficult part of the hymn mara­thon was the confessing/reconciling section of the hymnal, which the group sang through in the middle of the night. The singers came upon the Easter section just as the sun rose the next morning.

“It was incredible,” Switzer said.

Singers joined remotely from at least seven locations, including Bluffton (Ohio) University, Australia and the Iona community in Scotland.

“It’s amazing to see this kind of support,” Switzer said. “I think it’s a testament to how special and unique Goshen College is. There aren’t really words to describe how amazing this was.”