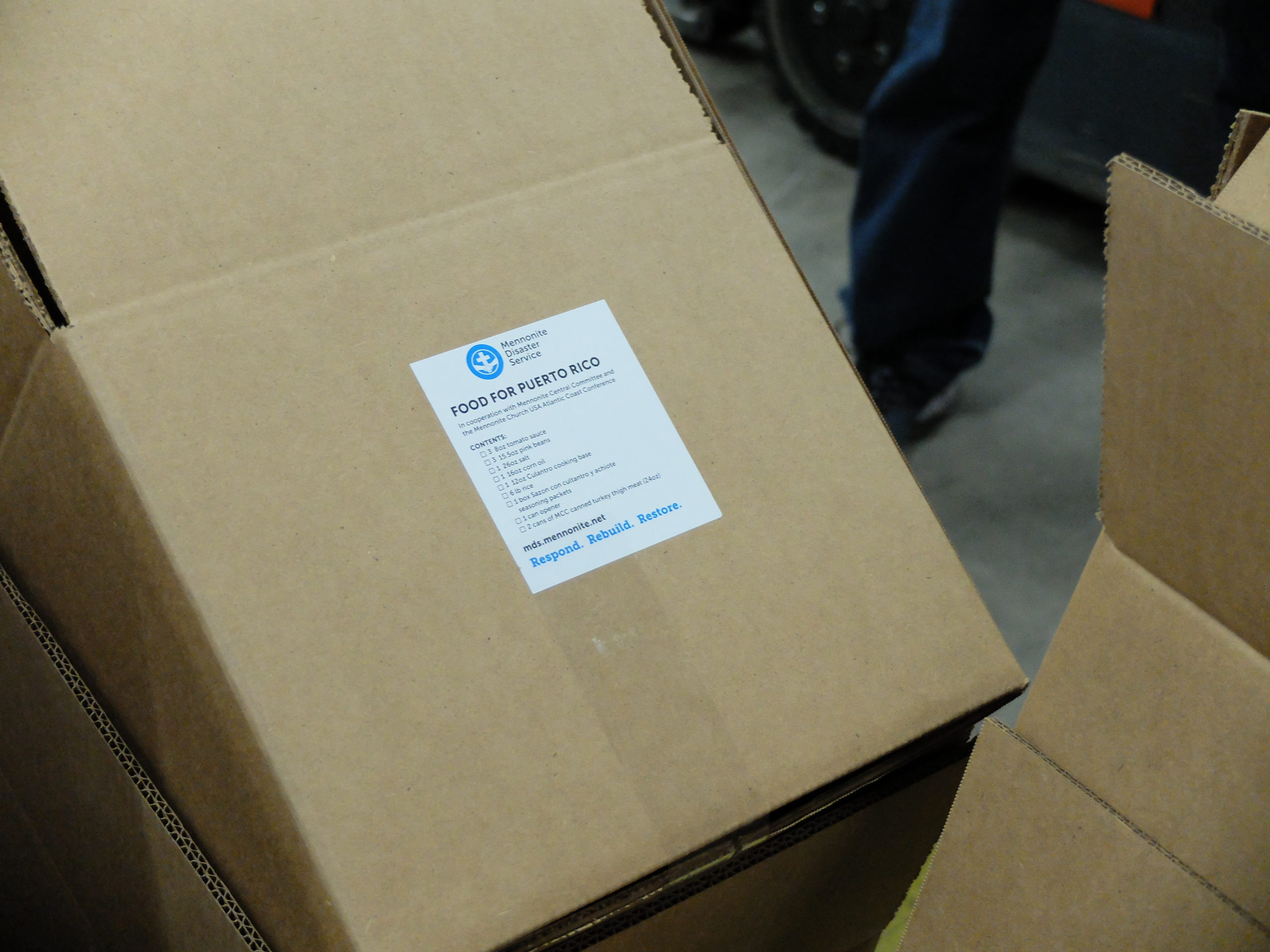 Empty boxes stacked ready to receive groceries bound for communities in Puerto Rico affected by Hurrican Irma and Maria. Members of Atlantic Coast Conference (ACC) partnered with Mennonite Disaster Service (MDS) to provide boxes of groceries, including canned meat from Mennonite Central Committee’s mobile cannery, to families and communities in Puerto Rico that were impacted by the hurricanes. In November 2017, the grocery boxes were packed and stored at the MCC Material Resources Center in Ephrata, Pa. with a shipping date of November 21st, 2017. (MCC photo/Laura Pauls-Thomas)

From November 13-15, 105 volunteers from 11 congregations of Atlantic Coast Conference (ACC) joined in packing food parcels for delivery to hurricane-devastated Puerto Rico. In total, 2,000 boxes were assembled, each designed to feed a family for one week. They are scheduled to arrive on the island for distribution through local Mennonite congregations by the first week of December.

early October asked, “’Que necessitas?’ What do you need?” recalled Elizabeth Soto, a participant on the team and a member of Laurel Street Mennonite Church, an ACC congregation in Lancaster, Pennsylvania. “What we heard was that now people need food: rice and beans,” Soto said.

A team representing six ACC congregations gathered in late October to plan a collaborative response and asked MDS to deliver the food parcels. MDS will be working in Puerto Rico to help rebuild schools, homes and churches that were damaged by the hurricane. Delivering food parcels is not a normal part of MDS’s response, but MDS agreed to work with the churches to meet this need.

MCC added its support by providing warehouse space for packing, shipping expertise and canned meat. Because Puerto Rico is a U.S. territory, MDS leads disaster response there, not MCC. However, for the next several months, MCC has seconded Rolando Flores-Rentas, an MCC program coordinator in Puerto Rico, to MDS to help coordinate recovery work.

ACC has many connections to the island. Although the group left ACC and Mennonite Church USA, ACC maintains a close relationship with the Convención de las Iglesias Evangélicas Menonitas de Puerto Rico (Puerto Rico Mennonite Conference) and several ACC congregations have served as on the island as well.

Forest Hills Mennonite Church, Leola, Pennsylvania, sent groups to work at Academia Menonita Betania for the last two years. Rebecca Degan, Associate Pastor with Forest Hills, shared that “[w]hen we saw the devastation Hurricane Maria brought to people and places that have touched the lives of people in our congregation, there was a desire to help however we could… As a church, we value the relationship we have with Betania and we continue to be in conversation as to how we continue building that relationship and supporting our brothers and sisters in Puerto Rico.”

Several congregations from ACC are already preparing teams to help with the rebuilding process in Puerto Rico, though it will be months until the island and its heavily damaged infrastructure can accommodate volunteer groups. Some estimates suggest that only 68 percent of Puerto Ricans had electrical power as of Dec. 6 and many are still without running water. The hope is that the boxes of food will nourish and sustain members of local Mennonite churches and that Puerto Rican congregations can distribute these boxes as a ministry to their local communities.