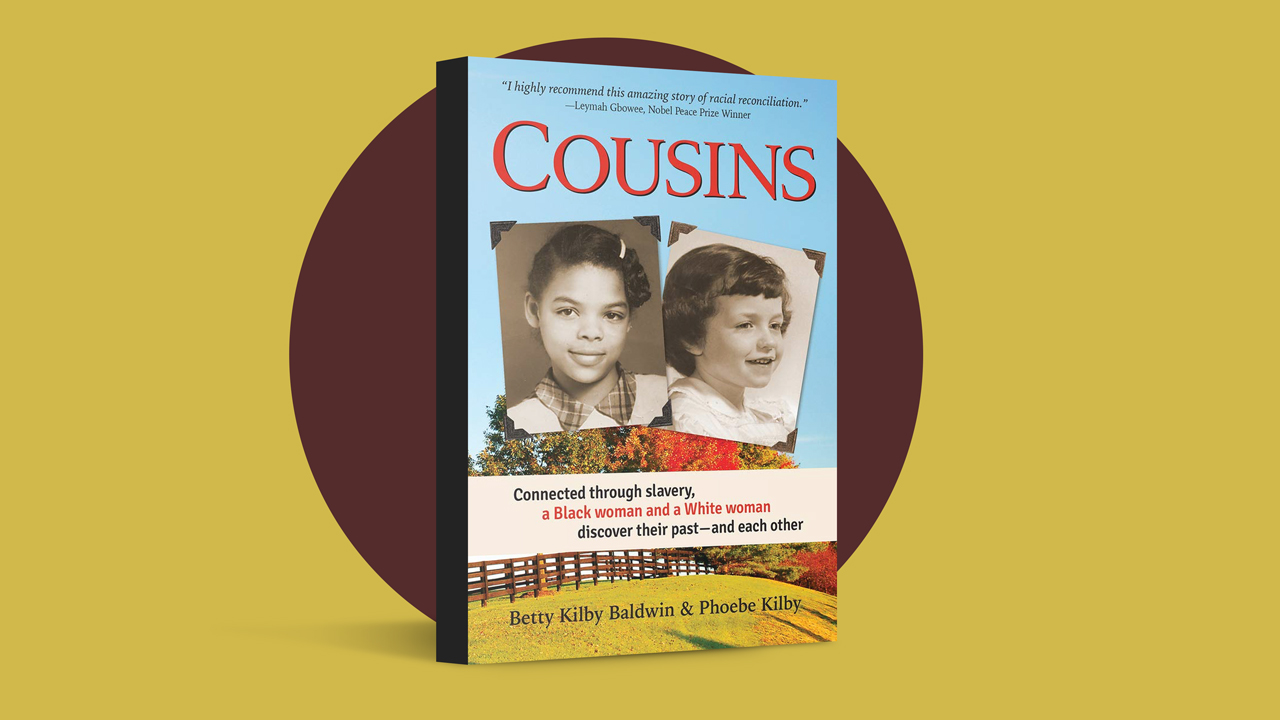 Cousins: Connected Through Slavery, a Black Woman and a White Woman Discover Their Past — and Each Other, by Betty Kilby Baldwin and Phoebe Kilby.

In Cousins, Betty Kilby Baldwin and Phoebe Kilby take readers on a transformative journey through truth, mercy, justice and peace. Revealing their families’ connections through slavery, their stories intertwine historical trauma and current race relations with courageous acts of grace.

On Martin Luther King Jr. Day in 2007, Phoebe Kilby, a white woman, sent an email to Betty Kilby Baldwin, a Black woman, noting that King had “a dream that the sons of former slaves and slave owners will sit down together at the table of brotherhood. Perhaps we, as daughters, can contribute to fulfilling that dream.”

Phoebe — who worked in development for Eastern Mennonite University’s Center for Justice and Peacebuilding — had reached out to Betty after discovering through research that her father’s ancestors had been ­enslavers. Knowing there were Black Kilbys in Virginia, she read a book Betty wrote, Wit, Will and Walls, and suspected her own family had enslaved Betty’s.

Phoebe was encouraged to contact Betty through her involvement with Coming to the Table, an organization that seeks to heal the wounds of slavery and the racism it spawned. She believes truth-telling “requires that descendants of enslavers own up to the fact that their family committed atrocities.”

Historical records confirmed the connection: Not only had Phoebe’s family enslaved Betty’s, DNA analysis showed the women were cousins.

Profoundly affected by the wounds of slavery, Betty’s family was involved in the civil rights movement, particularly as it related to the landmark 1954 Brown v. Board of Education case. Her father took the lead in a 1958 lawsuit that desegregated a Virginia high school, opening it to his children.

While research verified that Betty and Phoebe were related, it was Betty’s response to Phoebe’s invitation that would make them family. Betty would, in return, invite Phoebe to the family table for dinner.

Could these women from profoundly different backgrounds come to the table of sisterhood? Is the “beloved community” a realistic vision? How would they face their inherited experiences and overcome the conflicts that placed them on opposite sides of race relations in the U.S.? What actions would be needed for these cousins to overcome the legacy of slavery within their families and propose a new vision for society?

To answer these questions, ­Cousins implements a pattern of call and response, an oral tradition in the Black church, which gives voice to both women and creates an atmosphere of equity. Mutual appreciation is evident as the story flows from one woman’s voice to the other.

Cousins personalizes the impact of systemic oppression’s components: privileged land ownership, unequal access to education, race-based economic instability. The stories nested within historical narratives are painful and enlightening. Betty gives a glimpse of the sacrifices made by the children of the civil rights movement, who were referred to as “soldiers without uniforms.”

As a child, Betty received nonviolence training and became a warrior for justice. Her raw account of growing up in Warren County, Va., is reminiscent of Harriet Jacobs’ Incidents in the Life of a Slave Girl and gives testimony to Joy DeGruy’s Post-Traumatic Slave Syndrome: America’s Legacy of Enduring Injury and Healing.

Through training at EMU’s Center for Justice and Peacebuilding, ­Phoebe learned “to look at conflict as an indicator that something is amiss and that change is needed.” She wanted to explore her role in the oppression of African Americans and how she had benefited from being white.

Even as Betty and Phoebe revisited the past, they believed that together they could be part of positive change. Their dedication to the journey of reconciliation, combined with their commitment to getting to know one another, offers readers a practical model of peacebuilding methods that are usually only discussed as noble ideas. Now this model of reconciliation is being passed down to the next generation and shared with those who read Cousins.

Betty and Phoebe found that “God has given us both grace to forgive the past . . . to replace hate and all of our emotional hurt with love.” It is their hope that Cousins will extend the invitation to each of us to contribute to the dream of racial justice and peace.

Melody Pannell is the founder and CEO of Destiny’s Daughters Inc. and Embodied Equity Leadership Institute. A member of Immanuel Mennonite Church in Harrisonburg, Va., she chairs the Anabaptist World Inc. Board of Directors.