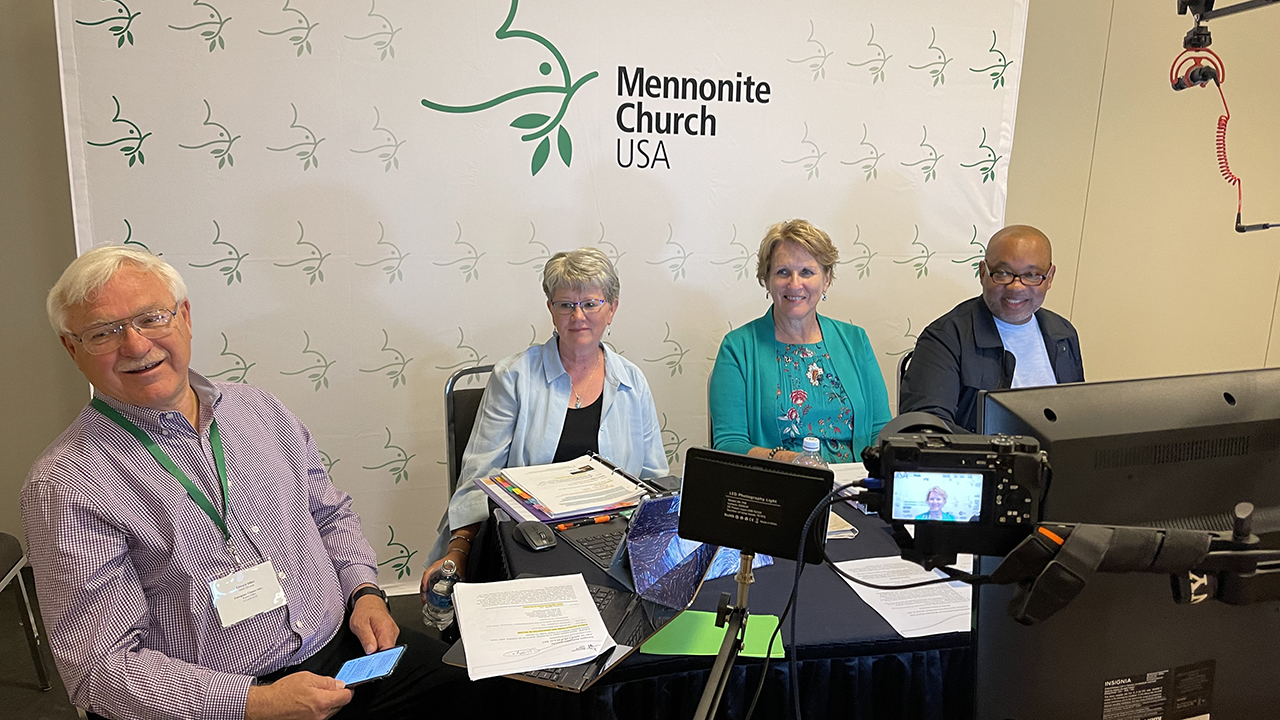 On the last day of MennoCon21, a virtual-only delegate assembly included announcements about resolutions that will — or won’t — get voted on at a special delegate session May 27-30 in Kansas City, Mo.

On July 10 in Cincinnati, Mennonite Church USA leaders gathered in a room at Duke Energy Convention Center to moderate the virtual session for 315 delegates participating by Zoom from across the country.

Two dealt with the Membership Guidelines, a 20-year-old document that prohibits pastors from performing same-sex marriage ceremonies. Area conferences do not consistently enforce the rule, and the Executive Board does not have the authority to enforce it.

The first — which comes from the Executive Board and recommends “retiring” the guidelines — will go to delegates for a vote.

The second — which calls for “repentance and transformation” and was written by Inclusive Pastors, a group practicing full inclusion of LGBTQ people in their congregations — was announced as “currently at an impasse.”

Glen Guyton, MC USA executive director, described the impasse: “This resolution was submitted by the writers for a vote, but the Resolutions Committee recommended it to be studied. In good conscience, we could not continue to move forward without the participation of the writers in an education process.”

In a news release from MC USA, one of the resolution’s writers expressed disappointment.

“We’re deeply disappointed that the Resolutions Committee rejected the resolution and is refusing delegates an opportunity to vote. Along with the 30-plus MC USA congregations and 500-plus individuals who sponsored this resolution, we are still awaiting an explanation as to why and how they came to this decision.”

A resolution that asks congregations to increase accessibility for people with disabilities — submitted by Anabaptist Disabilities Network, Mennonite Health Services and four Mennonite congregations — is recommended to delegates for a vote.

A resolution on “Justice in the U.S. Criminal Legal System” — submitted by Zachariah Begly of Reba Place Church in Evanston, Ill., and Elizabeth Reimer of Lombard Mennonite Church in Illinois — is recommended for study.

A fifth proposed resolution — “Church Membership in Virginia Mennonite Conference and MC USA,” submitted by Jim Hershberger, lead pastor of Mount Clinton Mennonite Church in Rockingham, Va. — will not move forward, the committee said, because it “would significantly change the structure between MC USA and conferences.”

Delegates approved bylaw changes, affirmed a slate of nominees for churchwide boards and heard reports from racial-ethnic and constituency groups.

Approval of nominees included the election of Jon Carlson, pastor of Forest Hills Mennonite Church in Leola, Pa., as moderator-elect.