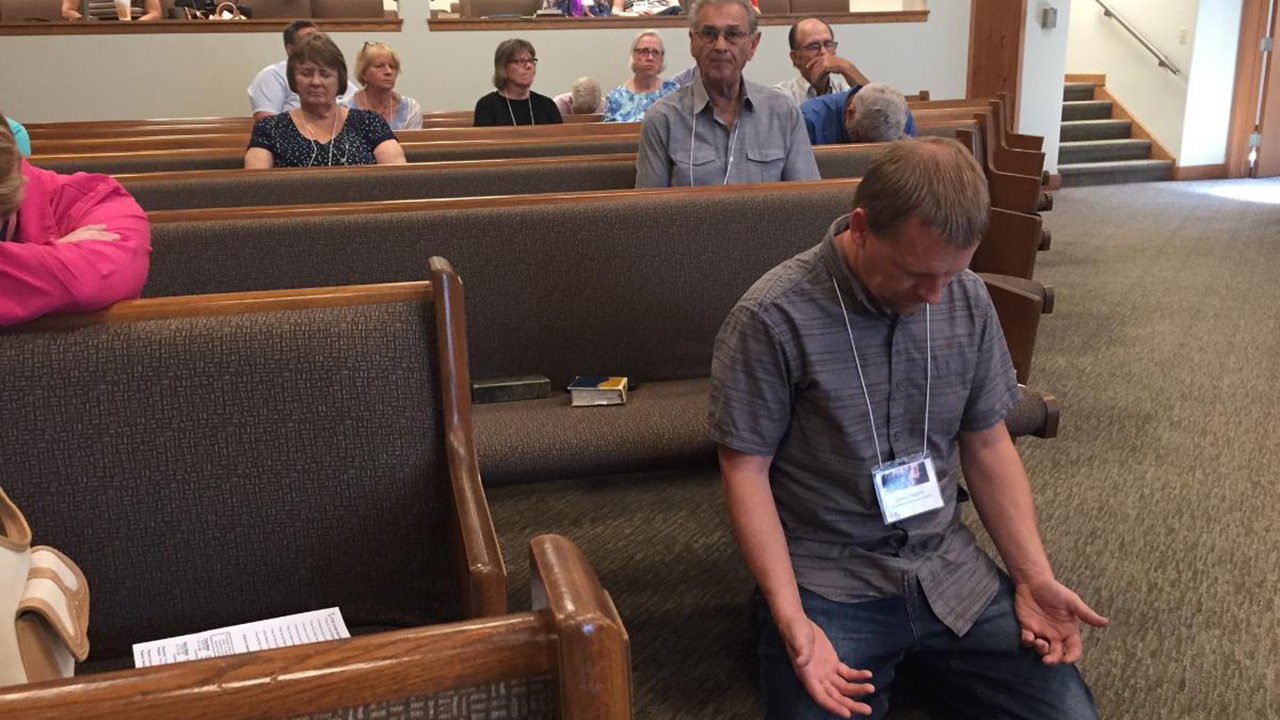 South Central Mennonite Conference isn’t dissolving or departing. Both possibilities came up for votes at the annual delegate meeting July 24. Anti-Mennonite Church USA sentiment was strong, but critics of the denomination lacked the supermajority needed to change the conference’s status.

Meeting at Whitestone Mennonite Church in Hesston, Kan., and by Zoom, more than 100 delegates came prepared to act on a motion to dissolve. By midafternoon they also decided to take on the question of whether to withdraw from MC USA.

The resolution to dissolve, brought by the conference’s leadership team, failed by a vote of 69-49, or 42% in favor. It needed two-thirds support to pass. Delegates rejected a motion to require only a simple majority rather than the constitutionally required two-thirds.

After the resolution to dissolve failed, Bob Yates, pastor of Bethel Mennonite Church in Inman, Kan., moved to reconsider a motion, tabled a year ago, to withdraw from MC USA. Delegates voted 61-49 to take the motion off the table. In the end, the motion to withdraw failed by a vote of 55-48, or 53% in favor.

The vote showed a delegate body almost evenly divided after several rounds of prayer and debate that featured sharp critiques and firm defenses of MC USA.

The leadership team had proposed dissolution as a way of resolving the nearly even split.

Supporters of the plan saw it as a way to ease the process for congregations to find new affiliations and avoid having winners and losers in a vote on withdrawal.

Critics of dissolution considered it too drastic and said they would regret lost relationships. Don Weaver of Hess­ton Mennonite Church said it would make everyone a loser and would be like saying, “We can’t agree, so let’s just burn the house down.”

Those who favored dissolution spoke mostly of the desire to leave MC USA rather than whether dissolving the conference was the best way to do it.

As debate shifted to the motion to withdraw, criticism of MC USA became more specific, often focusing on a perceived failure to recognize the authority of Scripture.

Yates cited a “falling away from the relevance of the Bible,” lack of a clear definition of sin and an acceptance of all religions. While people see LGBTQ affirmation as a central concern, he said it has become “a symptom of a bigger problem of ‘What does the Bible say? What is truth?’ ”

Jeff Blackburn, pastor of Greensburg Mennonite Church in Kansas, said MC USA “has continued to go down a progressive path, a path that we can’t take.”

“I cannot lead my congregation to accept the normalization of gender confusion and other ways to God besides Christ, and Scripture being up for grabs,” he said. “It’s not just one issue of homosexuality. There are many others.”

Jessica Ulrich of Peace Mennonite Community Church in Aurora, Colo., cited the benefits of leaving one affiliation for one that’s a better fit. She said her congregation had experienced better relationships with progressive congregations in Colorado after it switched from Mountain States Mennonite Conference to South Central “because we are not at odds” in the same conference.

Supporters of MC USA cited its emphasis on unity and inclusion as a positive witness to youth and to the world.

Jerol Schrag of Whitestone lamented that some people “think MC USA is the devil.” He said he had gone to many MC USA conventions “with your children” as a youth sponsor. This was a highlight of their church life, he said, but now “they’re not here. They’ve gone to other churches. We’ve messed it up” by focusing on “our own agendas.”

“When we go to heaven, are we going to be separated?” she asked. “We are going to be together. All of us have a scripture to justify what we feel. It’s all in how we interpret it. Jesus loved the lepers and walked with the sinners. Maybe we forgot how to do that. . . .

“Our youth are leaving the church. We should be out there proclaiming the love of Christ. That’s what our children want to see.”