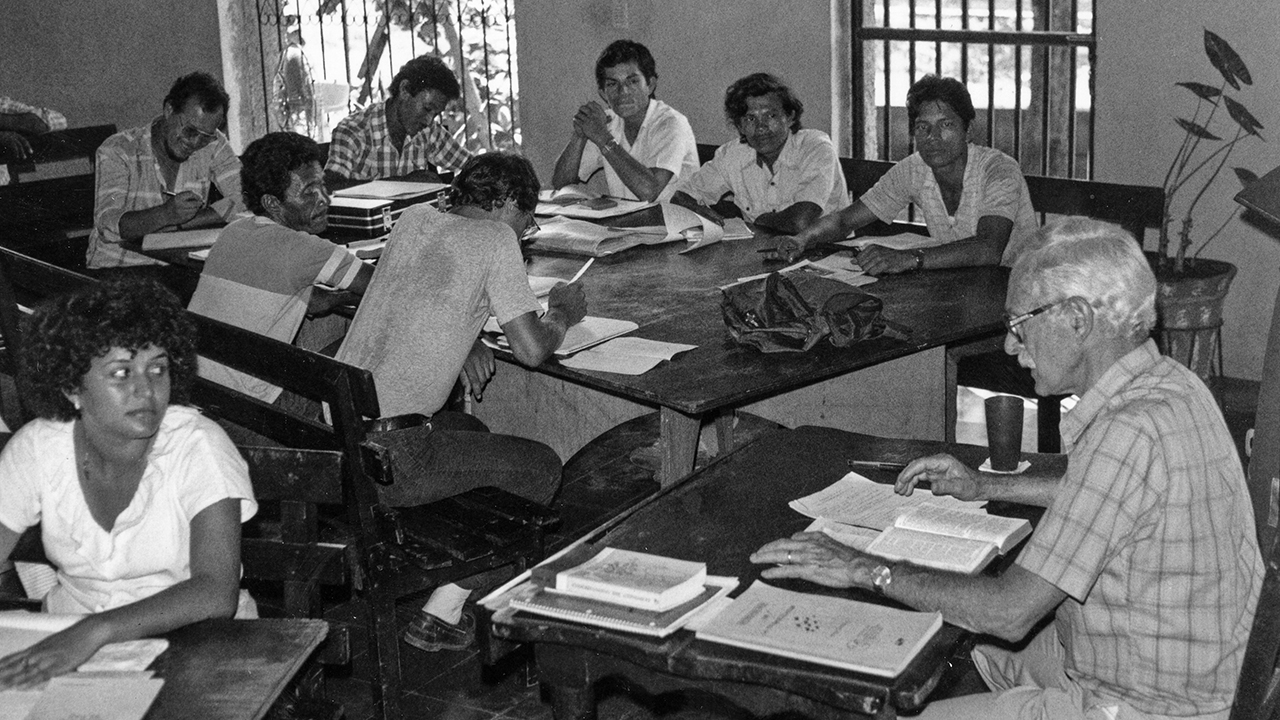 John Driver, 97, whose teaching and preaching the gospel of peace over six decades helped to shape the development of Anabaptism in the Spanish-speaking world, died March 17 at Goshen Hospital in Indiana.

Driver served with Mennonite Board of Missions from 1951 to 1994, beginning in Puerto Rico and continuing in South America and Spain.

“John Driver was unquestionably a great influence on the theology and practice of the Colombian Mennonite church, as well as on the Central American churches,” said Peter Stucky, pastor of Teusaquillo Mennonite Church in Bogotá, Colombia. “He taught a powerful message in his humble, unpretentious way.”

Driver “unselfishly and with much charisma shared the revelation that our Lord put in his heart,” said Cindy Alpizar of Costa Rica, a coordinator for the Central American region of Movimiento de Mujeres Anabautistas hacienda Teología desde América Latina (MTAL, Movement of Anabaptist Women Doing Theology from Latin America).

Linda Shelly, Mennonite Mission Network’s regional administrator for Latin America, said: “As I travel throughout Latin America, I frequently hear reference to John Driver’s books as foundational for igniting a love of the church and Anabaptist theological perspectives. He was able to communicate profound concepts in understandable language, making his books popular within the congregations, in addition to serving as texts for theological education.”

Born to Cora (Schrock) and Daniel Driver in Newton, Kan., March 28, 1924, he studied at Hesston College before serving as a conscientious objector in Civilian Public Service during World War II.

His introduction to the Spanish- speaking world came in 1945, when Mennonite Central Committee invited him to serve in a community development project in Puerto Rico.

One year later, he married Bonny Landis. In 1951, they began serving in Puerto Rico with MBM. In addition to ministries in community development, church planting and leadership formation, the Drivers pastored five congregations.

In 1967, the Drivers were invited to the Seminario Evangélico Menonita de Teología (Mennonite Evangelical Theological Seminary) in Montevideo, Uruguay, where he taught and served as academic dean.

Eight years later, they were called to Spain, where they served congregations in Barcelona, Burgos and Madrid and helped build a residence for seniors in Barcelona.

His books have been published in English, French, Japanese, Portuguese and Spanish.

From 1980 to 1994, the Drivers served in Argentina, Uruguay and Spain. After their official retirement in 1989, their mission work continued in assignments that lasted several months from their home base in Goshen. They were members of East Goshen Mennonite Church.

He was preceded in death by his wife, Bonny, and is survived by three children, Cynthia (James Rempel), Fred (Joyce Meyer) and Jonathan; two grandsons; and a brother, Donald.