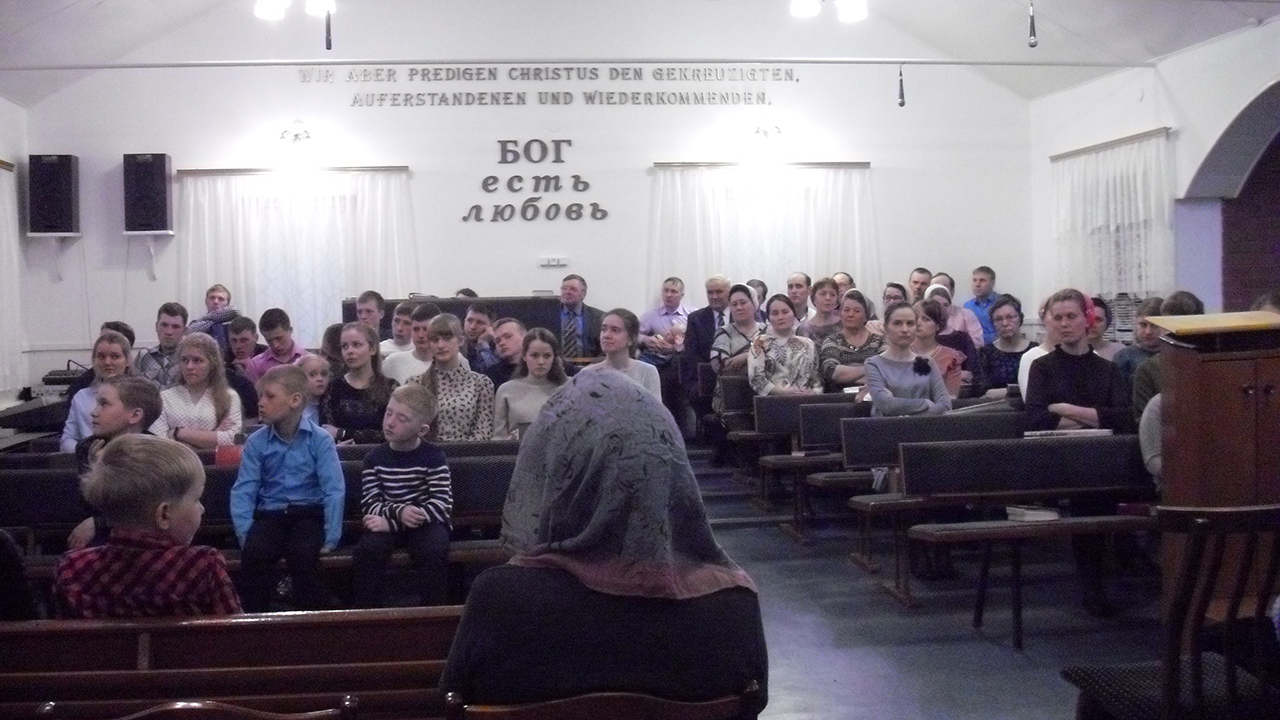 Worshipers attend a service April 20 at the Mennonite Brethren church in Solntsevka, a community about 20 miles south of Apollonovka. The text on the wall reads “God is love.” — William Yoder

A history of flooding in the West Siberian village of Apollonovka does not define the community’s future. Hardworking Mennonites and Baptists have heightened road surfaces, deepened ditches and diverted excess water into a swamp. Two-thirds of the costs were covered by the Willock Farm and a grain mill — enterprises integral to the Mennonite Brethren community’s success.

Economic vitality benefits religious life. In 2018, Apollonovka’s unregistered Baptist congregation completed a nearly 900-seat church building. Its people — who are actually Mennonite Brethren — fill about a third of the seats on an average Sunday.

Formerly known as Waldheim, Apollonovka has experienced an economic miracle. Willock Farm, founded 16 years ago, cultivates about 14,800 acres. Its industrial branch is flooded with orders, even without advertising. For some agricultural implements there is a waiting period of more than six months. In the last three years, the staff has grown from 40 to 50, and more buildings are under construction.

This is no modest success for the village of 850 in the remote Russian oblast (province) of Omsk not far from the border with Kazakhstan in southern Siberia.

The owners of the firm, Jakob Dirksen and David Epp, find it helps customers to see their products tested in the company’s own fields. This includes seeders manufactured under the Epp’s scrutiny. The company has even gotten into trade with China.

The major lender in the initial start-up, a Mennonite named Walter Willms from British Columbia, was not welcomed with open arms when he arrived in 1997. Some were worried about the charismatic tendencies of his theology; others leaned toward the old ways, preferring bare survival to taking financial risks. But instead of packing his bags, he persisted in his belief that locals should dare to make a fresh start.

Pastor was last of a kind in Siberia

Siberia’s last “Church Mennonite” pastor, Andrey (Heinrich) Vassilovich Peters, died of cancer on March 3, 2020, at the age of 49. His death became known beyond Siberia and Germany a year later.

“Church Mennonite” refers to Russian Mennonites who are not Mennonite Brethren.

Without formal theological training, Peters dedicated his life to pastoring the church in Neudachino, the only remaining non-MB Mennonite congregation in Siberia.

Peters’ career as a church worker began in 1988 as choir director of the once 400-member Novosibirsk congregation. His father, Willy Peters, an electrician, became the lead pastor in 1990. As his father’s health declined, Andrey Peters became active as a pastor and was ordained in 2000.

Besides pastoring, Peters founded and edited a nondenominational paper, Put Spasenia (Way of Salvation). He was active as a “circuit-rider,” visiting remote Lutheran and Baptist congregations. Later in Novosibirsk, he was active with an Adventist and a Messianic Jewish congregation.

Peters and his wife, Elena Pan­kratz, had four children. The couple became estranged but were reconciled during his final illness.

Siberia’s tiny group of “Church Mennonites” faces an uncertain future. In recent years, relationships between Peters’ group and a Mennonite Brethren congregation in Solntsevka have improved significantly. That several-hundred-strong congregation is led by Andrey Siemens, who officiated Peters’ funeral.

The Mennonite house of prayer in Novosibirsk is now being used by a Messianic Jewish group, which had been holding some services jointly with the Mennonites prior to Peters’ death. Several other small “Church Mennonite” groups in Siberia have found a home among Baptists.

Historian Peter Epp of Issilkul sees little future for the “Church Mennonites” of Siberia, noting that they have begun baptizing by immersion, as Mennonite Brethren do.

Among Russian Mennonites in Germany, he said, some MB congregations require rebaptism of membership candidates who were baptized by sprinkling. — William Yoder

He financed a grain mill in the village, run by lay church leader Ivan Dirksen. This company has nearly 10,000 acres, 15 employees and equally impressive machinery. It runs a bakery in another village. A sawmill with 40 employees is run by Andrey Tevs.

Economic success is clearly visible on the outskirts of these once-German villages. Apollonovka features 20 recently built houses. Except for one house built by a Low German-speaking Russian, all the houses belong to ethnic Germans, who continue to harbor a vision for rural life.

Local historian Peter Epp said Baptist and Mennonite congregations in this area are much larger than Lutheran ones “because the spiritual revival that broke out after World War II bypassed the Lutheran congregations. They have therefore become congregations of older women.”

A huge collective farm in Neudachino, east of Omsk, was liquidated by an investor five years ago. All the barns are empty. A cheese factory started up with money from North American Mennonites has been lying idle for 10 years. Work is to be found largely on the railway and Gasprom. Lack of jobs has been a primary driver of emigration.

Even Apollonovka has lost more than half of its ethnic German inhabitants; only a third of the village is still of German origin. The topic of departure is a lively one. Ivan Dirksen said he and his wife accompanied their parents to Germany in the early 1990s, but returned at Apollonovka soon thereafter. For them it was a matter of conscience.

“We were experiencing a spiritual revival” in Apollonovka, he said, and were not willing to abandon new converts.

Until the end of the Soviet Union, preaching in Apollonovka was still done in German. Since then, High German has suffered a rapid decline. Services are now held in Russian; only the children’s stories are told in Low German. Many small children only speak Low German initially. Roughly half of those attending church in Apollonovka are children and youth.

A Mennonite from Nieudachino, recalling the hardships previous generations endured under communism, expressed gratitude for “the immeasurable blessings that have befallen us over the past 30 years.”

People hope for improved relations between Russia and the West, fearing that a new Cold War would curtail exchanges with relatives in Germany.

William Yoder lives in the Kalinin­grad region of Russia. His Faith in Eurasia articles are at wyoder.de.