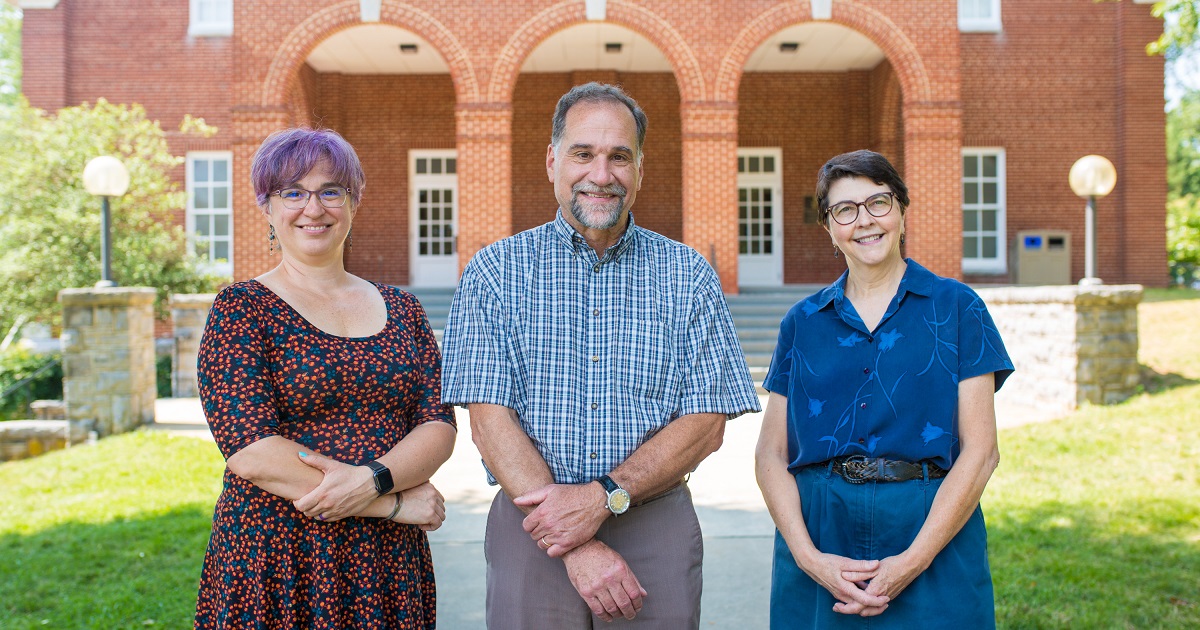 Photos of the new accademic deans for the new 3 school structure. From left to right: Tara Kishbaugh, Dave Brubaker, and Sue Cockley.

David Brubaker, Sue Cockley and Tara Kishbaugh now each lead one of three schools as part of EMU’s new academic structure. The design, developed after a year of study and discussion, will enhance opportunities for interdisciplinary collaboration and will streamline undergraduate-graduate tracks, among other objectives. It is being phased in and will be fully implemented by the start of the fall 2020 semester.

“I am so pleased that leaders of this caliber were willing to step up to serve as inaugural deans in our new academic structure,” said Fred Kniss, EMU provost. “They will help to ensure its success, and I am looking forward to working with them as an academic leadership team.”

Administration of Eastern Mennonite Seminary will be housed within the School of Theology, Humanities and the Performing Arts, and will retain its independent identity and brand, Kniss said.

Brubaker, dean of the School of Social Sciences and Professions, has directed and taught in EMU’s MBA and master’s in organizational leadership programs. In addition to various other roles since beginning at EMU in 2004, he has been a practicum director, academic director and member of the leadership team for the Center for Justice and Peacebuilding, as well as Faculty Senate co-president and vice president and faculty sustainability task force co-chair.

In prior years he served with various community development and conflict transformation organizations, including as associate director of Mennonite Conciliation Service and assistant director of Mennonite Central Committee’s Brazil program. He has authored numerous books and articles, and has independently trained or consulted with over 100 organizations on six continents.

Andrew Miller will now be director of EMU’s MBA and master’s in organizational leadership programs. He has been a faculty member and administrator at EMU since 2012. He has taught in the department of business and leadership, as well as in graduate programs, and directed the cross-cultural program.

Cockley, dean of the School of Theology, Humanities and Performing Arts, has served at EMU since 1996. She has directed the adult degree completion and master’s in organizational leadership programs, and has been dean of Eastern Mennonite Seminary and of graduate and professional studies. She will continue as seminary dean.

Previously she was an adult education specialist and director of the adult educator’s research network for the Virginia Department of Education, designed community education projects in Haiti and Kentucky for Mennonite Central Committee, served as a national trainer for Literacy Volunteers of America, and volunteered in basic adult education in West Virginia with VISTA.

At EMU since January 2004, Kishbaugh, dean of the School of Sciences, Engineering, Art and Nursing, has chaired EMU’s biology and chemistry departments since 2013. An organic chemist, she has taught chemistry courses and seminars on ethics, land use and food chemistry. In addition to various committee and council roles at EMU, she has served on undergraduate council executive and chaired the pre-professional health services and intellectual life committees. She has received multiple honors, awards and grants, and has organized and offered a variety of chemistry symposiums and workshops.