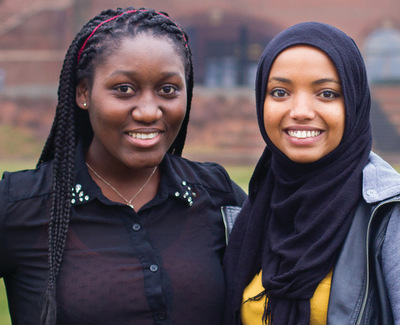 HARRISONBURG, Va. — After spending the summer thousands of miles from her native Liberia and watching nervously as Ebola swept through her country, sophomore Winifred Gray-Johnson wanted to take action when she returned to the Eastern Mennonite University campus.

She never imagined that desire would draw the support of her university community and a Nobel Peace laureate.

“Doing something was a way to help myself with the panic of thinking about my family and what was going on in my country,” she said. “I didn’t want to be silent and just sit on my hands.”

She shared her concerns with fellow members of EMU’s International Students Organization.

To Gray-Johnson’s surprise and delight, Liberian peace activist and Nobel laureate Leymah Gbowee learned of the fledging movement and enthusiastically agreed to headline a fundraising dinner. Gbowee earned a master’s degree in conflict transformation from EMU in 2007.

Tickets for the Feb. 7 dinner with Gbowee at EMU’s Martin Chapel are $100, with $80 of that a tax-deductible donation to the Gbowee Peace Foundation Africa. Dinner guests will receive preferred seating at a public lecture later in the evening in Lehman Auditorium. An offering will be taken at the lecture.

“She is helping us raise awareness, but at the same time, we know that this money will go through her organization to those who most need it, [to] the children who have lost family members or been displaced,” Gray-Johnson said.

Gbowee, who received the 2011 prize for her work in ending Liberia’s civil war, says her country’s decadelong peace is threatened by Ebola.

“We must face another enemy from within,” she wrote in an August op-ed published by The Guardian in Britain. “Ebola is resurrecting old traumas from those who survived the war.”

Kaltuma Noorow, ISO co-president, credits ISO members for pulling together and taking on huge responsibilities to work on the fundraiser and other events.

“We’ve all learned a great deal from the process,” she said. “It’s important that every member be recognized for their thoughts and all the time spent deliberating and processing.”

Her own involvement with the project has been empowering.

“In class, we learn a lot of theory, and just reading about it is great, but I’m interested in change. I’m a doer,” Noorow said. “This event shows that we students can actually do something given the platform. We never imagined it to reach this magnitude. It’s been a lot of work and a lot of time, but we’re all really excited.”

Noorow and Gray-Johnson met Gbowee briefly when she came to EMU to deliver last year’s commencement speech and celebrate her son Joshua Mensah’s graduation. They are looking forward to learning more about her peacebuilding experiences.