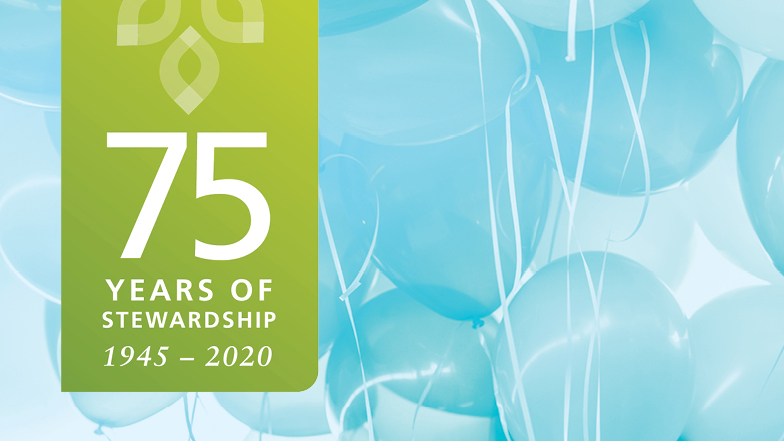 Instead of an in-person gathering, Everence will celebrate its 75th anniversary virtually, with a videocast scheduled for 3 p.m. EST July 19.

“It’s not how we originally envisioned kicking off our year-long anniversary observance,” says Ken Hochstetler, Everence President and CEO. “But this virtual alternative now enables us to include even more of our members, partners and friends in recognizing this meaningful organizational milestone and all those who have driven our stewardship mission over the years.”

Founded in 1945, Everence (then known as Mennonite Mutual Aid/MMA) began as a way to support Mennonite conscientious objectors returning from Civilian Public Service assignments following World War II. By offering loans to help CPSers and their families as they returned to their home communities, the organization became a new way for church members to carry out the historic Anabaptist practice of sharing financial burdens with one another through mutual aid.

Growing out of that long tradition of church communities putting faith into action, Everence now serves some 78,000 members and more than 30 church denominations and networks through its comprehensive suite of financial products and services. To serve members and clients, Everence employs more than 375 staff, financial professionals and representatives at its corporate headquarters in Goshen, Indiana, and more than 30 retail locations across the United States. Additionally, more than 1,100 volunteer advocates help to provide or coordinate stewardship education and other services in congregations.

The July 19 videocast will feature comments from John D. Roth, professor of history at Goshen (Ind.) College and author of a new Herald Press book, Where the People Go: Community, Generosity, and the Story of Everence. Church and community leaders will share comments and reflections. Music will be provided by the Walking Roots Band, a Harrisonburg, Virginia-based acoustic folk and roots music group.

To watch the anniversary videocast and find more information about Everence, visit everence.com/75years.