The scientific revolution in the Renaissance-Reformation era led to severe tensions — and sometimes warfare — between religion and science. The new enthusiasm for science, along with other developments, led to an undermining of religion and to “colossal secularization,” in the words of the historian Herbert Butterfield. 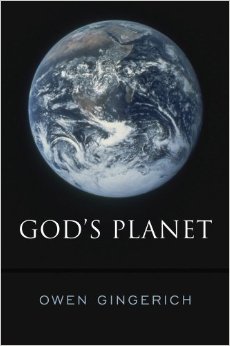 Where was God in all of this? Where was ultimate knowledge? The science-religion debate has been ongoing ever since. Owen Gingerich of Harvard University writes about the relationship of science and religion in God’s Planet. He gives the role of God considerable attention and hits upon some of the hot topics of the day.

Gingerich is professor emeritus of astronomy and of the history of science at Harvard University and senior astronomer emeritus at the Smithsonian Astrophysical Observatory. A leading expert on Copernicus and Kepler, he is also an active Christian and Mennonite. Gingerich is a graduate of Goshen College in Indiana. Before that, he grew up in Kansas on the campus of Bethel College in North Newton, where his father was a professor. As a teen­ager, inspired by the starry heavens of Kansas, he took out a life membership in the American Association of Variable Star Observers.

God’s Planet began with Ginge­rich’s 2013 Herrmann Lectures on Faith and Science delivered at Gordon College in Wenham, Mass. From his varied backgrounds, he blends a view of the physical universe, the history of science and Christian faith.

Can these diverse fields of knowledge truly be melded? Ginge­rich begins by acknowledging that in this modern era the two cultures of science and religion (the “two magisteria”) seem very separate and contradictory. From this perspective, some would say, they are NOMA — “non-overlapping magisteria” — and should be kept far apart.

Not so, states Gingerich. He shows “how the magisteria have repeatedly overlapped over the past centuries and how today it seems unlikely that the overlaps will cease.”

In three chapters he examines three major scientific developments and shows how religion and other metaphysical approaches overlap with science and help to fill out the picture.

The first of these chapters is about Nicolaus Copernicus (1473-1543). Gingerich asks: “Was Copernicus Right?” Copernicus gave us the heliocentric view of the universe, a radical cosmology for the time. This view was not readily accepted and, in fact, religious authorities resisted it greatly because it seemed to contradict Scripture. Psalm 104 declares, “The Lord God fixed the Earth on its foundation so that it can never be shaken.”

The Catholic Church placed the book on the Index of Prohibited Books, where it remained until 1838. (Galileo and his writings had a similar fate.) But in good time the Copernican cosmology came to wide acceptance. Copernicus was right. The sun-centered universe is no longer controversial. Some scientific views, however, are not so readily accepted.

Next comes Charles Darwin (1809-1882): “Was Darwin Right?” Darwin presented the view of animal and human evolution based on natural selection, survival of the fittest and “descent with modification.” Unlike Copernicus, Darwin managed to escape the Index; nevertheless, his evolutionary views were (and continue to be) controversial. A majority of Americans believe Darwin was wrong. According to a recent Gallup Poll, a minority of Americans (4 out of 10) accept evolution.

The doubters fear that belief in evolution leads to atheism and denies the sanctity of human life. From the other side, some fiery evolutionists also parade this view. Gingerich heard one prom­inent evolutionary biologist state categorically: “Evolution demands atheism.” Confronted with this “screed,” Gingerich says, “I shook my head in astonishment.”

As a scientist, Gingerich does not reject evolution. He views it as a mechanism of biological change and accepts that “Darwin was on the right track.” But he projects a larger view that allows for God’s purpose or design in the process.

In chapter 3, the third example, the center is Fred Hoyle (1915-2001): “Was Hoyle Right?” Although less well-known than the two previous scientists, Hoyle was one of the great astrophysicists of the 20th century. He promoted the steady-state cosmological theory, positing a universe that had lasted forever with no beginning (and no Creator). Scholars eventually discarded his steady-state theory on scientific grounds; at this point, Hoyle was wrong.

Then he became a proponent of a new theory of stellar nucleo-synthesis (the most complex topic of the book), now widely accepted as important scientific knowledge. This had to do with carbon formation and consequent production of oxygen at levels required for life on Earth. Had these chemical reactions not been in perfect balance, life on Earth would not have been possible.

Recognizing that nature was perfectly balanced — so wonderfully “fine-tuned” — caused Hoyle to reconsider his long-held atheism. There must be a purpose or plan: “Some supercalculating intellect must have designed the properties of the carbon atom.” At this point, Ginge­rich thinks Hoyle got it right.

Throughout, Gingerich describes how science and religion can work together to find purposeful answers. Modern science is built on efficient causes (how things work), but not on final causes (why things work). For the latter, the final cause, religious faith tells of a Creator God.

“To me,” Gingerich writes, “belief in a final cause, a Creator God, gives coherent understanding of why the universe seems so congenially designed for the existence of intelligent, self-reflective life.” In an earlier book, God’s Universe (2006), he wrote at length about how he and other scientists “dare” to believe in a God who acts in the world and in a “universe of meaning and purpose.”

Gingerich’s approach will be satisfying for many Christians, but not for everyone. His writings are a welcome antidote to the current flurry of atheistic books. God’s Planet gives us stimulating reading. For people interested in the history of ideas, in the relationship of faith and science and in how some Mennonites are wrestling with intellectual issues, this book is well worth reading.