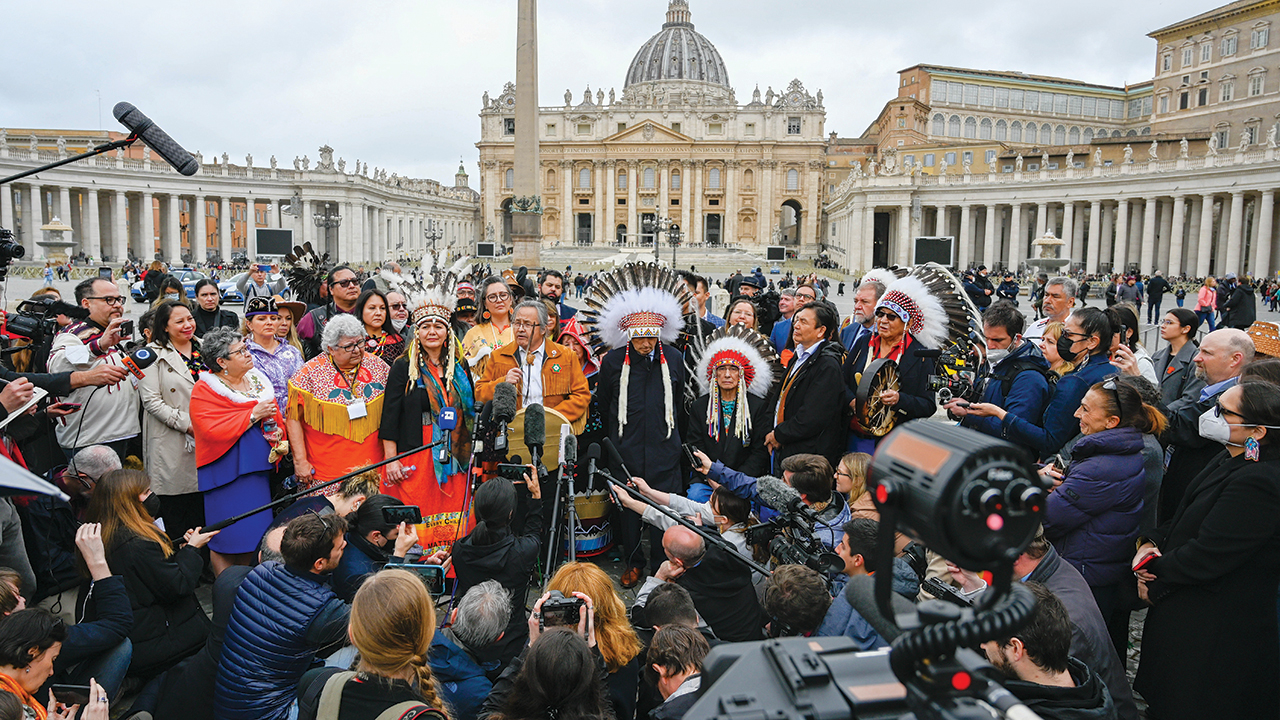 Members of the media gather around a delegation of Indigenous Canadians on March 31 in St. Peter’s Square at the Vatican. About 75 reporters from Canada, the United States and Europe were in Rome for the visit by Indigenous people with Pope Francis. — Fred Cattroll/Assembly of First Nations

“A day that will be lifted up in history, a really special day.”

Survivors of Roman Catholic-run residential schools are “finally going to be able to start to get some closure” because of it, he said.

As the religion reporter for the Winnipeg Free Press, I had a front-row seat on that historic event. The newspaper sent me to the Vatican to cover the March 28-April 1 visit by delegates from Canada’s First Nations, Métis and Inuit communities to see the Pope.

While there, I was able to hear firsthand as survivors described the physical, mental, emotional and sexual abuse they suffered at the schools, which ran from the mid-19th century until the early 1990s.

Altogether, about 150,000 Indigenous children were forced by the Canadian government to attend the schools — some children taken from their parents as young as 4 years old.

Unlike other churches in Canada, Mennonites were not very involved in residential schools.

The only involvement by Mennonites was through three schools operated by the U.S.-based Northern Lights Gospel Mission in northwestern Ontario and at several day schools in Manitoba and Saskatchewan.

Yet Canadian Mennonite leaders joined Pope Francis in lamenting the abuses experienced by Indigenous people at all the schools — and expressing gratitude for his apology.

Steve Heinrichs, who heads up Indigenous-Settler Relations for Mennonite Church Canada, watched the apology with his daughter.

As they listened to the “powerful prayers of the Indigenous delegates,” he said, “we were moved. Often to tears. We don’t fully understand what took place. We expect more to come. But we sense, we pray, Creator is at work. And doing something significant.”

Looking ahead, Heinrichs encourages Canadians to “listen to Indigenous voices, in their diversity, as they respond to the apology. Sit with the various responses. And pray. For survivors, for the Catholic Church, for our church, for one’s self.”

He added: “Reflect on the calls to the Catholic Church for repentance and reparation. And bring those calls for change home by shining a light on our Mennonite community, your own congregation, asking Creator: What is the ongoing decolonizing work we need to do, together?”

Rick Cober Bauman, executive director of MCC Canada, who lived in Indigenous communities in Canada that experienced harm from Christian churches, is “grateful for a part of the Christian community acknowledging and taking responsibility for its impacts.”

At the same time, behind those thoughts “is the realization that my faith community, the Anabaptists in Canada, have multiple places in our history where we were direct beneficiaries of Indigenous groups losing their lands, or where we participated in the grand government plan to make the ‘Indian’ into someone else. Our celebration of the pope’s apology should be followed by deep introspection about our errors of omission and commission. — John Longhurst, For Anabaptist World

The goal of the schools — set up by the government and operated by Catholic, United, Presbyterian and Anglican churches — was to assimilate Indigenous children into Canadian society.

Or, as it was put when the schools were created: “To kill the Indian in the child.”

It didn’t work; Indigenous people in Rome said time and again they survived as a people and are still here, despite all odds. But the schools took an enormous and terrible toll on them as individuals, families and communities. It’s a brokenness that haunts Canada today.

As a Canadian and a Christian, I shared the pope’s expression of sorrow, sadness and shame as I listened to survivors tell their stories.

At the same time, I was impressed by the grace they showed me, a descendant of European settlers who came to Canada in the 20th century. Again and again they thanked me, as a person and a reporter, for listening and for sharing their stories with the world.

I was also impressed by their desire to move ahead in a spirit of reconciliation. As one delegate said to a bishop following the papal apology: “Now we are brothers. Now we need to not let the past define us. We can move forward together.”

That doesn’t mean the road will be easy. There is still much anger among Indigenous people over what happened. The papal apology is just a step on the journey of healing.

The week in Rome was infused with spirituality and a recognition of God, or the Creator’s, presence.

Each day started with Mass and a traditional Indigenous sunrise ceremony. Each meeting with the pope began with prayer, usually conducted in the language of the Indigenous person doing the praying.

Press briefings were infused with references to the divine, God or Creator. Sometimes they included songs, prayers and sacred ceremonies.

When asked if she thought the visit to the pope should have occurred much earlier, Pixie Wells, a Métis from Abbotsford, B.C., said “Creator does things in Creator’s time.”

The involvement of God, or the Creator, will be needed as the pope makes plans to come to Canada, possibly as early as July. He is expected to apologize to Indigenous people on their territories. I plan to be there, too, and to follow the healing journey ahead — including in my own life as I look for ways to be reconciled with Indigenous people.

John Longhurst of Winnipeg, Man., is a freelance journalist and frequent contributor to Anabaptist World.