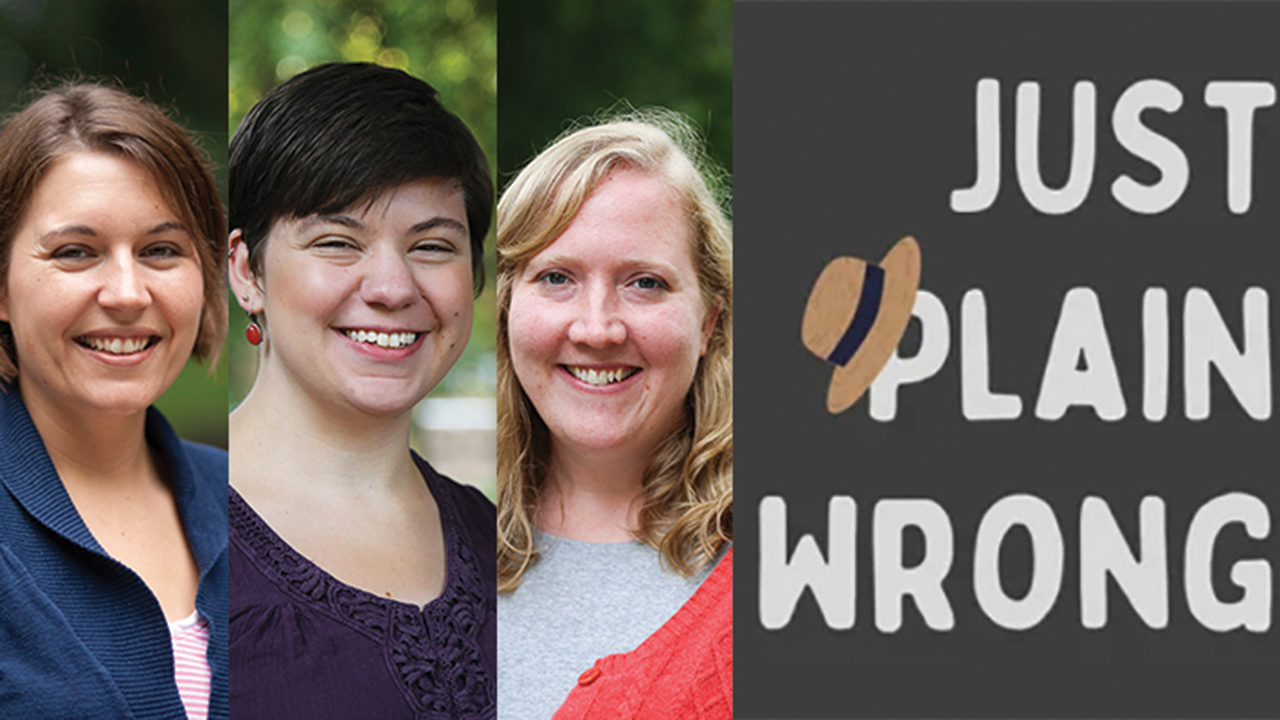 Since their first episode in ­December, Erin Milanese, Abby Nafziger and Tillie Yoder have co-­hosted the “Just Plain Wrong” podcast, in which the three Mennonite librarians, who all worked at Goshen College at the time, review depictions of Amish, Mennonites and other Plain groups in fictional works such as Amish romance novels, television shows and films.

“Just Plain Wrong” just finished up its first season with 20 episodes and is gearing up for season two, which is launching in July.

When Milanese first decided to start a podcast, she wasn’t sure where to begin. Her podcast co-host Abby Nafziger, head of technical services, serials and systems at Goshen’s Good Library and a 2006 graduate, said ­Milanese tested several possible podcast premises.

“Her original idea was something about getting old 1950s cookbooks and trying different Jell-O recipes,” Nafziger said. “I think she got one and tried it and was like, nope, not doing that!”

One failed Jell-O experiment and lots of brainstorming later, Milanese came up with the idea of a podcast on Mennonite and Amish fiction.

“I don’t remember a particular a-ha moment when the idea came to me,” said Milanese, who concluded her work as head of learning technologies at Goshen in February. “But after I had the idea, I asked a few friends and family members what they thought and eventually decided it was worth pursuing.”

With premise in hand, she needed to find co-hosts. Two former co-workers, Nafziger and Yoder, were interested in Milanese’s proposal for the podcast. Yoder is instruction, research and acquisitions librarian at the Good ­Library and a 2012 Goshen graduate.

“I liked the idea of having people to collaborate with, because none of us knew anything about podcasting before we started this,” Nafziger said. “So the idea of doing it with people we knew and liked and got along with sounded appealing to me.”

Yoder said: “I’ve always been curious about Amish fiction because I see it at the Mennonite Historical Library a lot. I’ve never actually read it, but I have been judging it from a distance for a few years now. So I figured if I am going to judge it, I should read it.”

Located in Good Library, the Mennonite Historical Library is one of the world’s most comprehensive collections related to Anabaptist and Mennonite history.

“Erin used to work at the Mennonite Historical Library,” Nafziger said. “And when I first started at Goshen, I worked there, and Tillie still works there.”

Episodes range from discussions of Amish romance novels to commentaries on Amish-inspired episodes from the TV sitcom Schitt’s Creek. Yoder enjoys discussing each piece of Mennonite fiction with Milanese and Nafziger, even if she’s not a fan of all the actual material.

“Sometimes the books are difficult to value,” she said. “But usually by the end of the discussion, I’m like, ‘Well, that wasn’t entirely without merit.’ ”

“I’m finally getting used to the idea that there are people actually listening to this,” Nafziger said. “I think all three of us expected that we would put this out and our parents and siblings would listen, but we wouldn’t get any other listeners. So we were kind of shocked that people were actually listening.”

Listeners leave reviews, send compliments and sometimes email corrections. Yoder said they value the corrections and make sure to “fess up” when they get something wrong.

All responses from listeners are appreciated, Nafziger said, “whether it’s correcting us on types of buggies that Amish use in particular areas or saying they liked an episode.

“The whole idea that people are listening and interacting with us is wonderful. As I see it, people who are correcting or adding to it are making the podcast better, so I’m a big fan of that.”

“Just Plain Wrong” can be accessed on Apple Podcasts, Audible, Spotify and other platforms.