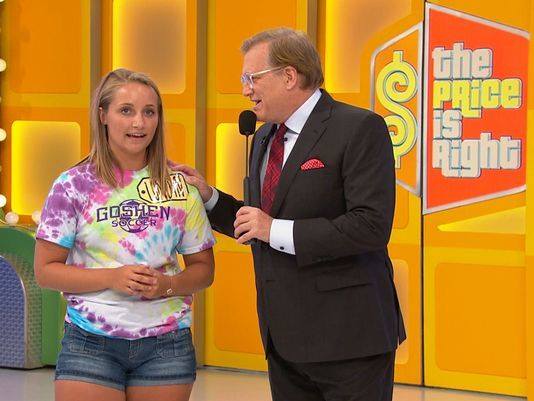 During pre-season soccer games in California right before classes began, Feasel, a starting midfielder on the GC women’s soccer team, and the rest of the women’s soccer team attended a taping of the Price is Right. Sporting a Goshen soccer tie-dyed shirt, Feasel was chosen from the crowd to play.

On her first bid, her guess was closest on a set of FitBit watches.

After coming on stage and telling host Drew Carey that she was there with her soccer team, Carey asked the announcer, “How is she going to get to these soccer games from now on?”

“She shoots, she scores… a brand new car!”

Following an expected reaction to this news, Feasel eventually guessed the correct numbers in the game “One Away” to win the car, a blue Fiat 500 hatchback.

Feasel later moved on to the Showcase Showdown, where her wheel spin of 85 cents sent her on to the final showcase round.

In the final round, Feasel bid for a pontoon boat, camping gear and a trip to a Yosemite National Park

resort. Again, her bid was closest. Her winnings totaled more than $47,000.

Feasel’s journey to Goshen College has not been a straight path.

During the second semester of her freshman year at St. Joseph’s college in Rensselaer, Indiana, she learned that there would be no sophomore year for her there, as St. Joseph’s was closing.

She still had three more years of college left, and she still wanted to stay in Indiana and play soccer and study elementary education. So she transferred to Goshen College, where there was a spot on the soccer team for her and an elementary education program. She arrived on campus in August and found a new home among the women’s soccer players as a Maple Leaf.