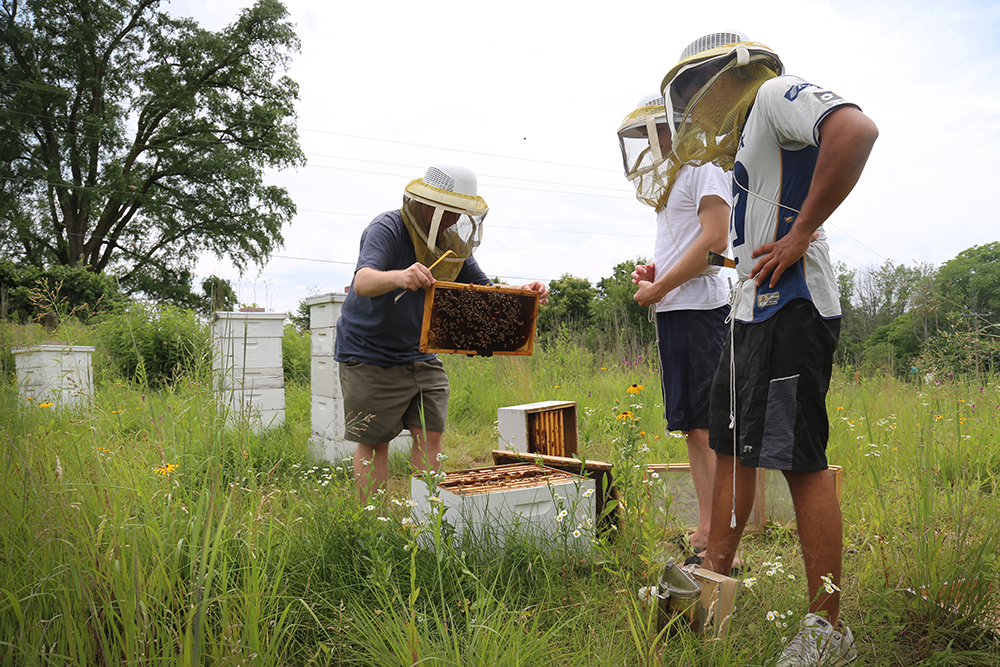 Maple Scholars is an eight-week long intensive study and research program that pairs students with faculty members who serve as supervisors and colleagues. The program—which welcomes students from all academic disciplines—provides student scholars with the opportunity to conduct hands-on research while working closely with their faculty advisors.

Throughout the summer, the students live together in a community of scholars and take part in weekly presentations of their research during Friday colloquiums. The program concludes with a celebration where the scholars’ results are presented to their peers and the public.

The 2015 Maple Scholars students include:

Guadalupe Arellano-Nelson, a nontraditional student studying social work from Dowagiac, Michigan, will work with Carol Jarvis, associate professor of social work, on the Needs Assessment of the Latino Community Research Project. Arellano-Nelson is collaborating with community members and Ryan’s Place, a local children’s grief center, to better understand the needs of the large Latino population living in Goshen.

Anneliese Baer, a senior Bible and religion major from Villa Ridge, Missouri, is working with Paul Keim, professor of Bible and religion, on a project titled “Theodicy and Martyrdom: The Anabaptist Reception of the Book of Job,” in conjunction with Keim’s work in writing a commentary on the book of Job for the Believer’s Bible Commentary.

Karina Flores, a junior broadcasting major from Goshen, Indiana is working with Kyle Hufford, FiveCore Media general manager, on a project called “The Goshen Spotlight.” For the project, Flores’ goal is to capture the untold stories of Goshen on film.

Elizabeth Franks-North, a senior English major from Greensboro, North Carolina, is working with Suzanne Ehst, associate professor of education and director of secondary education, to study the discrepancy between teaching theory and actual classroom experiences.

Eva Lapp, a 2015 graduate with a degree in peace, justice and conflict studies (PJCS) from Goshen, Indiana, and Seth Miller, a 2015 graduate with a degree in history and social research from Wellman, Iowa, are working with Regina Shands Stoltzfus, assistant professor of PJCS. The project, titled “Racial Identity Mediated Through Faith Identity: Does a Historic Peace Church Perspective Influence an Understanding of White Racial Identity?” explores the construction of, experience with, perceptions of and overall themes arising from discussions of white racial identity.

Tim Litwiller, a sophomore communication major from Peoria, Arizona, is working with John D. Roth, professor of history, to produce a promotional video for the Bearing Witness Project prior to the Mennonite World Conference at the end of July.

Jake Smucker, a 2015 graduate with a degree in music from Woodward, Pennsylvania, is collaborating with Nayo Ulloa, adjunct Spanish professor, as well as composer Jaime Diaz Orihuela, with the goal of creating a professional booklet of Orihuela’s music.

Bobby Switzer, a 2015 graduate with a degree in peace, justice and conflict studies (PJCS) from Berne, Indiana, along with Joe Liechty, PJCS, are working on a project to construct and administer a survey to graduates of the PJCS program at Goshen College.

Benji Thapa, a 2015 graduate with a degree in art from Kathmandu, Nepal, is working with Kyle Hufford, FiveCore Media general manager. Thapa is making video templates for the Asian Rural Institute (ARI), a Japanese training center for rural leaders.