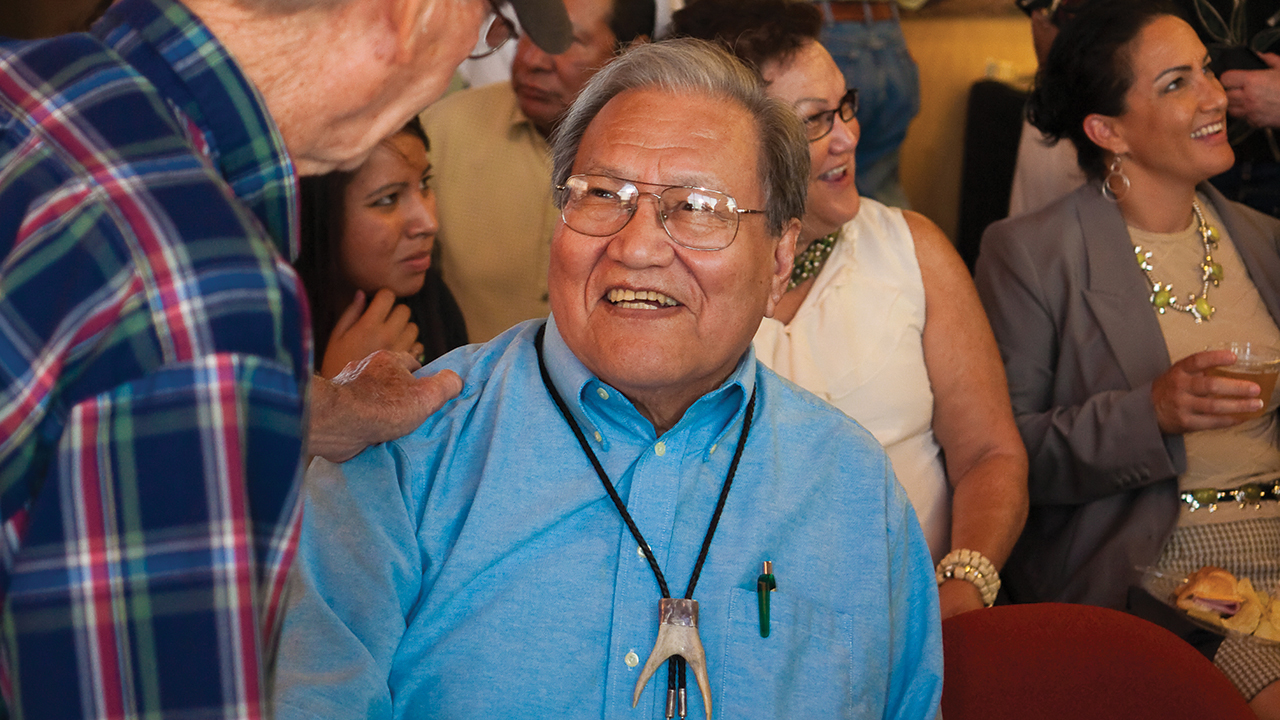 Lawrence Homer Hart, He’amavehonevėstse (Sky Chief), principal peace chief of the Cheyenne and a Mennonite pastor who worked to bring reconciliation to both peoples, died March 6. He was 89.

Hart cultivated the traditions of servanthood in the peace chief tradition, reinterpreting Bible stories for Men­nonites and Cheyenne to help his diverse flocks understand the tribal Jesus he knew.

At the funeral on March 10 in Clinton, Okla., Raylene Hinz-Penner, who wrote a biography of Hart, Searching for Sacred Ground: The Journey of Chief Lawrence Hart, Mennonite (Cascadia, 2007), spoke of Hart’s connecting of Native American and Anabaptist spirituality.

“His life was a blending of the peacemaking he had learned from his grandfather visiting the Ute Mountain Utes, the vows he took to become a Cheyenne Peace Chief, the Cheyenne ways of justice, which incorporated forms of restorative justice, Anabaptist martyr peace stories he had studied and careful theological interpretation of Jesus as a tribal leader from his point of view as a Cheyenne,” Hinz-Penner said.

“When a Mennonite college friend [Larry Kaufman] died during his Pax service in Congo [in 1956], Hart vowed that he too would give his life to peacemaking. He preached the Jesus way and modeled calm and devoted presence in service to his people, both Cheyenne and Mennonite.”

Hart served as a reviewer for the Native American Graves Protection and Repatriation Act and worked to repatriate the remains of thousands of Native Americans held in museums. To bury them with dignity, he worked with Mennonite Central Committee and denominations across the United States in a project designated “Return to the Earth” and established a site at the Cheyenne Cultural Center the Harts founded outside Clinton, where the unidentified remains of up to 25,000 Native Americans could be returned to the earth.

Hart was born to Jennie Howling Water and Homer Hart on Feb. 24, 1933, near Hammon, Okla. Homer Hart had converted to Christianity as a teenager, and he and Jennie became lay ministers in Hammon Mennonite Church.

At the suggestion of Pastor Arthur Friesen, Lawrence Hart attended Bethel College in North Newton, Kan., where he met Betty Bartel of Hillsboro, Kan. They were married Oct. 4, 1957.

After two years at Bethel, Hart left college in 1955 to realize his dream of flying jet fighter planes in the Navy and Marines. He was the first American Indian to become a U.S. military jet ­pilot and instructor. While in the Marine Corps, he was selected to appear on the What’s My Line? television show. He signed in using his Cheyenne name, Black Beaver, and his occupation was a jet fighter pilot.

His grandfather John Peak Hart selected him to take his place as a Cheyenne chief. When his grandfather died, Hart left military service and returned to college, graduating from Bethel in 1961. He then attended Associated Mennonite Biblical Seminary and became an ordained Mennonite pastor. In 1963 he and Betty moved to Clinton, where he pastored Koinonia Indian Mennonite Church until October 2021.

With connections in Native American and white Mennonite circles, Hart was a prophetic voice. At a Native assembly on the Hopi Reservation in Arizona, Hart spoke of a tribal Jesus whitewashed by the European-Western reading of Scripture. Citing Mark 8, where Jesus uses his spittle to heal a blind man, he described Jesus healing with rituals similar to those used by the Cheyenne. He believed that the biblical tradition of justice matched with Cheyenne justice and that tribal lenses for viewing Jesus’ ministry made it possible to see Jesus for who he was.