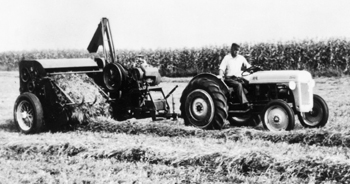 Summer is here and with it farmers’ annual hopes for plentiful yields of wheat, oats and other crops. The equipment to harvest those crops has improved dramatically over the years, and three Mennonite inventors played vital roles in those changes.

Ed Nolt (1910-1992) was a mechanically adept young man from Farmersville in Lancaster County, Pa., who worked as a custom cutter, hired by farmers to harvest their crops. Harvesting was a two-step process. First, the crop in the field had to be cut. Then the grain had be separated from the chaff. For the second step, the crop had long been taken to a threshing floor (see, for example, Matt. 3:12). Later the threshing machine was introduced, which mechanically separated the grain from the chaff.

By the 1930s came the combine, which combined the two steps into one. The combine was driven through the field, picking up the crop and then mechanically separating the kernels from the chaff. The kernels were deposited into a bin on the combine, while the straw was expelled out the back.

The straw was valued as bedding for farm animals. For handling and storing, stationary baling machines had been invented to compress the straw into bales, which were held together by wire hand-fed through the sides of the baler and then knotted by hand.

Nolt bought one of the first combines in the area in 1936. But he also wanted a portable baler, one that went to the field like the combine. What’s more, he wanted a baler that required only one person to operate it.

There were portable balers on the market, but he found them lacking. They were all pulled by tractors, picking up the straw and forcing it into a chamber to create bales. But one baler required several people to insert wooden blocks into the chamber to shape the bale into the desired length and then insert and tie the wire to hold it together. It was a labor-intensive process — a nonstarter for Nolt.

He spent the winter of 1936-37 inventing a one-person, self-knotting portable baler. He used a prototype in his custom cutting in 1937, made some refinements, and the Nolt Special was born. Others wanted one too, and he was soon working full time making more.

In 1940, the Nolt Special caught the attention of the new owners of the New Holland (Pa.) Manufacturing Co., which had fallen on hard times. Nolt and his baler joined New Holland, where it continued to be a hit and made the company a success.

A decade after the introduction of the Nolt Special, Lyle Yost (1913-2012) and Adin Holdeman (1915-2006), both of Hesston, Kan., developed a new way to unload grain from a combine. Yost was also a custom cutter, traveling every summer from Texas to Manitoba to cut wheat. Time was always critical, since a crop in the field was vulnerable to wind, rain, hail and even tornadoes. Yost and his fellow custom harvesters had seen crops destroyed by storms because the grain couldn’t be harvested fast enough.

One way to speed up the process would be to unload grain from the combine while it was still moving. But there was no way to do that. Once its grain bin was full, the combine had to stop and the grain unloaded by gravity and shovel. Sometimes the combine even had to be tilted to help the grain slide out.

Yost had the idea of an augur arm attached to the side of the bin that would unload the grain into a truck or wagon traveling alongside the combine while the combine was still running. He wasn’t the first with the idea. But Yost, like Nolt a decade earlier, discovered that previous attempts weren’t successful. So he took his idea to Holdeman, who ran a machine shop in Hess­ton. Together they invented an unloading augur that could be attached to almost any combine.

Introduced in 1947, it was well received by other custom cutters. To meet the demand, Yost, Hol­deman and Elmer Berner, Yost’s uncle and a natural salesman, founded the Hesston Machine and Manufacturing Co. which eventually became Hesston Corp., for years a leading manufacturer of farm implements. The augur eventually became standard on all combines.

The baler, augur and other implements made their inventors a lot of money, a good deal of which they gave to the church. Nolt, a member of the conservative Horning Mennonites, started a foundation and founded Fairmount Homes, a retirement community in Ephrata, Pa. Yost gave to Hesston and Goshen colleges, his alma maters; Hesston’s Yost Center gymnasium bears his name.

Holdeman was a member of the Church of God in Christ, Mennonite, or Holdeman Mennonites. He found some of his responsibilities in tension with his religious beliefs, so he divested himself of his Hesston holdings and left the corporation. He later returned as an employee.

As for the companies the three men made famous, they exist in different forms. The New Holland name still exists as a line of agricultural machinery produced by CNH Industrial. Hess­ton Corp. was purchased by AGCO in 1991.