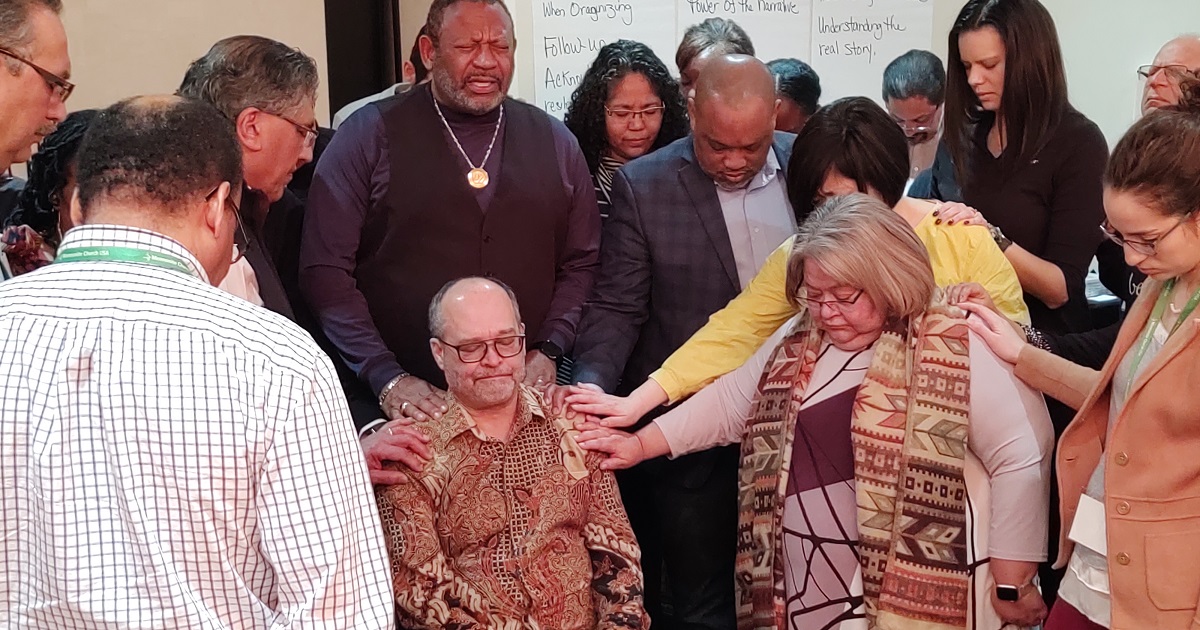 At this year’s Hope for the Future (HFF) gathering, attendees celebrated the legacy of Stanley W. Green, one of the event’s original organizers, and discussed ways to press forward for peace and justice throughout the church.

The Jan. 23-26 gathering in Dallas honored Green, executive director of Mennonite Mission Network. He has led the mission agency of Mennonite Church USA (MC USA) for 20 years and will retire in July. Green and other people of color helped organize the first HFF in 2011 in Tampa, Florida. They sought to create a space where Africans, African Americans, Asians, Hispanics and Native Americans could freely discuss their experiences in the church.

After years of evolving to a larger event that also included White participants, this January, HFF returned to its earlier, more intimate purpose. Thirty-eight people attended the four-day gathering of worship and Bible-based discussions. These discussions were themed “#BringthePeace – There is no peace without justice,” rooted in Micah 6:6-8.

Speakers emphasized God’s ideal of peace and justice as being a circular relationship: God, people and the land (all of creation) in harmony and equally reflecting God. The group explored the importance of unlearning the version of Christianity that aligned with European empires to colonize other continents, destroying Indigenous cultures and dehumanizing people of color.

Also among the speakers was Cheryl Bear of the Nadleh Whut’en First Nation. Bear, a Canadian-based, award-winning singer-songwriter and educator on Christianity and Indigenous people led a learning lab on decolonizing the Bible. She explained how Western colonialists falsely demonized generations of Native American religious practices and concepts. The damage from this demonization persists today and harms all people and the land, she said.

Bear, who is Christian, opened the gathering with an ancient prayer from her culture. She also honored Green for his godly spirit, saying, “Each word that you have spoken has been like a seed that has been watered by the Lord.”

Attendees celebrated Green during a Saturday evening banquet. Carlos Romero, also an HFF co-founder, emceed the celebration. He reflected on first meeting in 1993 when Green became leader of Mennonite Board of Missions, a predecessor agency of Mission Network.

“There were only four people of color at the denominational leadership level,” said Romero, who resigned as executive director of Mennonite Education Agency in 2019. “Stanley became the fifth.”

Romero read tributes from Green’s former and current colleagues unable to attend the gathering. They described Green as a graceful, dignified and tireless advocate for peace and justice in the church.

Among the several attendees who shared fond reflections was MC USA executive director Glen Guyton, the first African American to hold the position. Guyton thanked Green for being among those who paved the way for him. Fellow HFF co-founder and current lead organizer Iris de León-Hartshorn, associate executive director for operations for MC USA, thanked Green for his perseverance and persistence.

Visibly moved, Green urged attendees to continue to be agents of healing and grace in ministry. Green said he and his wife, Ursula, are trusting God for what is next.

Attendees expressed concern that as leaders such as Green move on, MC USA would experience a reversal of leadership gains and a “backlash” toward people of color.

During his closing sermon on Sunday, Green encouraged and challenged attendees to continue to be agents of change to liberate the Jesus that has for several generations been misrepresented by many Christians. He encouraged them to show through direct actions that Jesus taught that everyone and all of creation should be valued equally.