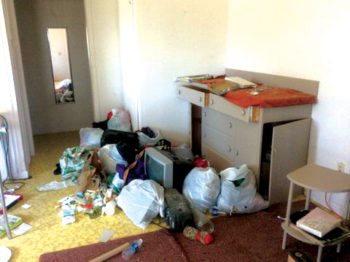 Disheveled classrooms and missing equipment are some of the challenges facing Mennonite Education Agency as it discerns how to get Hopi Mission School up and running again.

Mennonite Church USA representatives Carlos Romero and Ed Diller toured the Kykots­movi, Ariz., school in mid-August. It was the first time anyone from MC USA visited the MEA member school since a chaotic vacuum followed years of legal proceedings.

Concerned about financial transparency and other activities at HMS, MC USA filed a complaint in Navajo County Superior Court in 2015 asking that the HMS board be evicted from the property so that MEA could review documents. A July 3 ruling sided with MC USA as land­owner, ordering the board to ar­range for an orderly transition.

“After we won the case, we sent a locksmith in who changed all the locks in the school, because we had gotten notice that things were being taken from the school,” said Romero, MEA executive director.

He said buildings and apartments seemed to be in good shape, but some contents were missing. A judge granted MC USA an injunction against equipment being removed from school property, but items had already been removed by the time the court took that action.

Romero saw student desks were flipped over, books and other items from shelves strewn across the floor and office papers in disarray.

“In the apartments the school has, we found that all the washers and dryers were missing, and many of the beds were missing,” Romero said. At least one window was broken, and a garage door showed signs of an attempt to pry it open. “The other stuff that was left, most of it once again was thrown on the floor or flipped over, and the same was true in the houses that are part of the school.”

It is difficult to know exactly what is missing, because no inventory of equipment has been found. There also doesn’t seem to be a record of student enrollment.

“My understanding is the school had a minivan and a 15-passenger van, and those are missing. They took the vehicles,” Romero said. More than 1 million soup labels and box tops collected by churches were used when HMS acquired a minivan in 2003. “Apparently there was also a relatively new school bus that they had there, and that is no longer there.”

Romero and Diller, an attorney, visited as members of a task force MC USA convened in 2014 to address mounting concerns about HMS and school administrators’ lack of cooperation with MEA. Mennonite Mission Network closed its service worker unit there at the same time.

The one-day visit in August did not offer time to meet tribal leaders, Kykotsmovi Mennonite Church or students’ families.

“I am hoping to go back to Hopi within the next four to five weeks,” Romero said Sept. 21. “At that time we will be setting up meetings with tribal leaders as well as some of the leaders of the town, to update but to also explore ways of working together and ways we can partner to move this ministry forward.”

Because the HMS board could still appeal the judge’s ruling, MC USA is still working to bring the matter to a conclusion before fully devoting resources to cleaning and organizing the school. The board has indicated it wants to reopen a private school and claims ownership of both the name Hopi Mission School and the property’s contents.

“Our lawyer is in conversation with their lawyer, to see if we can bring the whole legal case to a final end,” Romero said.

Meanwhile, Romero has been reaching out to a number of people in search of two to four individuals to live at the school for at least six to eight weeks and coordinate initial restoration. On Oct. 2 he still hoped to identify those people by mid-October.

“We have received numerous emails or calls from people who are interested in going and helping for three or four days or a week in cleanup,” he said. “But before we can really start to do that we really need to have someone on site to help us to coordinate.”

Teachers will come later. MMN has a history of providing some workers and is represented on MC USA’s task force. Romero said MMN has indicated an openness to considering the most appropriate way to be involved with HMS again.

MEA will soon mount an appeal across the denomination for financial support, and Romero hopes to be able to coordinate with Hopi Mission Foundation to reignite its work to raise funds for the school.

MEA is exploring whether it is possible to restart school for the spring semester, and intends to definitely be ready by the beginning of the next school year.