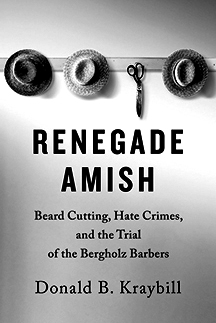 The attacks on Amish families described in Renegade Amish feel entirely surreal: because they were perpetuated by other Amish and because they were so violent, so seemingly inexplicable. Could people known for being “the quiet in the land” really enact such horror on their Christian brothers and sisters? 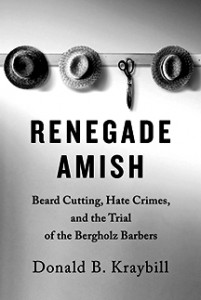 Kraybill answers this question with a resounding yes. The renegade Amish of the Bergholz settlement in Ohio did indeed violently attack other Amish, men and women who were not only co-religionists but sometimes even their own family members. They broke into homes, often at night; restrained and terrorized their victims by screaming in their faces; and then cut their victims’ beards and hair, before disappearing again, many times leaving in vehicles owned by unsuspecting hired drivers.

The apparent dissonance in these opening narratives and the peculiar nature of Amish acting violently to shear helpless victims sets the scene for Kraybill’s fascinating exploration of the Bergholz Amish. In compelling detail, Kraybill describes the development of the Bergholz settlement, the odd and troubling behavior of its leader, Bishop Sam Mullet, and the events in 2011 that sent 16 Amish to trial and then to federal prisons for sentences ranging from life to one year. The book also considers U.S. jurisprudence, as the Berg­holz case tests hate-crime laws and the Shepherd Byrd act, established in 2009 to protect victims of hate crimes and to more effectively prosecute hate-crime perpetrators.

Kraybill has long been recognized as an Amish expert. His The Amish, published in 2013 and co-authored with Karen M. Johnson-Weiner and Steven M. Nolt, is the most comprehensive study on the Amish; the book also served as a companion to the PBS American Experience documentary of the Amish. As a scholar of Amish faith and culture, Kraybill brings insight into why the Bergholz settlement developed and the ways the Berg­holz Amish differed significantly from other Amish groups, something Kraybill acknowledged as part of his testimony at the 2012 criminal trial of Bergholz settlement members.

Kraybill sets the development of the Bergholz settlement within the context of wider Amish history and practice, showing how divergent the Bergholz people and their leader were from other Amish communities. Kraybill describes Mullet as “strong-minded, opinionated, and conservative,” an imposing man who “wanted to hold tightly to old customs” and who was critical of other Amish whom he believed yielded too easily to modernization.

In 1995, Mullet began building his own settlement in eastern Ohio. Outsiders saw a troublesome pattern emerging in the new community, which was isolated from other Amish. Mullet’s powerful influence — and his quick, unorthodox ascendency to becoming a bishop — also worried observers. And they had reason to be worried: Mullet wielded tremendous power and did not act like a normal bishop.

Mullet began styling himself a prophet of sorts. He invited women in the settlement to sit in his lap, hug him and even sleep with him as a way to “help” them within their own marriages. Members were punished in “Amish jails” — chicken houses, dog kennels or small pens. Mullet saw the imprisonment as a spiritual practice of sorts, a way for his followers to clear their minds and make themselves right with God.

Bergholz Amish used other forms of “spiritual” discipline, including paddling presumably errant members — the proverb about sparing the rod taking on new tenor when brothers paddled brothers, wives their husbands and children their parents. Kraybill notes that such punishment went on for about a year in the settlement, during 2009 and 2010 in what was known as the “Winter of Lament.”

During that time, the Berg­holz Amish began voluntarily cutting their hair and beards as signs of remorse and purification. For Amish, long hair and beards are a religious distinction, and the ritual cutting symbolized the sinfulness of the shorn, the need for repentance and a rededication to the faith. Mullet continued to wear his beard, claiming his people told him he had nothing for which to repent.

In time, though, the beard and hair cuttings were no longer voluntary, nor were they confined to the Bergholz community. Kraybill’s book turns on this: the decision by Mullet and his followers to victimize Amish outside their settlement they deemed in need of discipline. The manner of discipline they chose was violent and painful, traumatizing victims, some who were family members of the attackers.

This filial relationship seemed to matter little, as the Bergholz barbers delivered judgment on men and women who chose not to fight back: not during the immediate attack, but also — for some of the victims — not later, when they were faced with the decision about whether to press charges or not. Here, too, Kraybill’s extensive knowledge about Amish beliefs informs our understanding of the Bergholz case, and the dilemma faced by Amish victims who were humiliated by the attack but who struggled to conclude whether they should apply principles of nonresistance, two-kingdom theology, and the belief that God, not courts or juries, should judge.

But the courts did judge. Kraybill narrates the criminal case against the Berg­holz men and women without sensationalizing the details, showing sympathy for several defendants who seemed caught in Mullet’s web and whose fate as federal prisoners was something for which the Amish could never prepare. Mullet himself is less a sympathetic character.

Shortly after Renegade Amish was released, an appeals court overturned the hate crime convictions of Mullet and his co-defendants, opening the way for resentencing in February. The appeal argued that the judge’s instructions to the jury were faulty, as he had framed the attacks as hate crimes and not familial disputes, as Mullet had characterized them. The case has taken on new significance as the court system works to decide how people will be prosecuted under the Shepherd Byrd act and how broadly hate crimes can be defined.

Rather than seeing this new ruling as undermining or contradicting what Kraybill has written, readers should see the case of the Bergholz Amish as a continuation of a compelling story: one being written in the lives of those convicted, as well as in the lives of those who were victims of a culturally specific violence. The story of the Bergholz barbers is not finished.