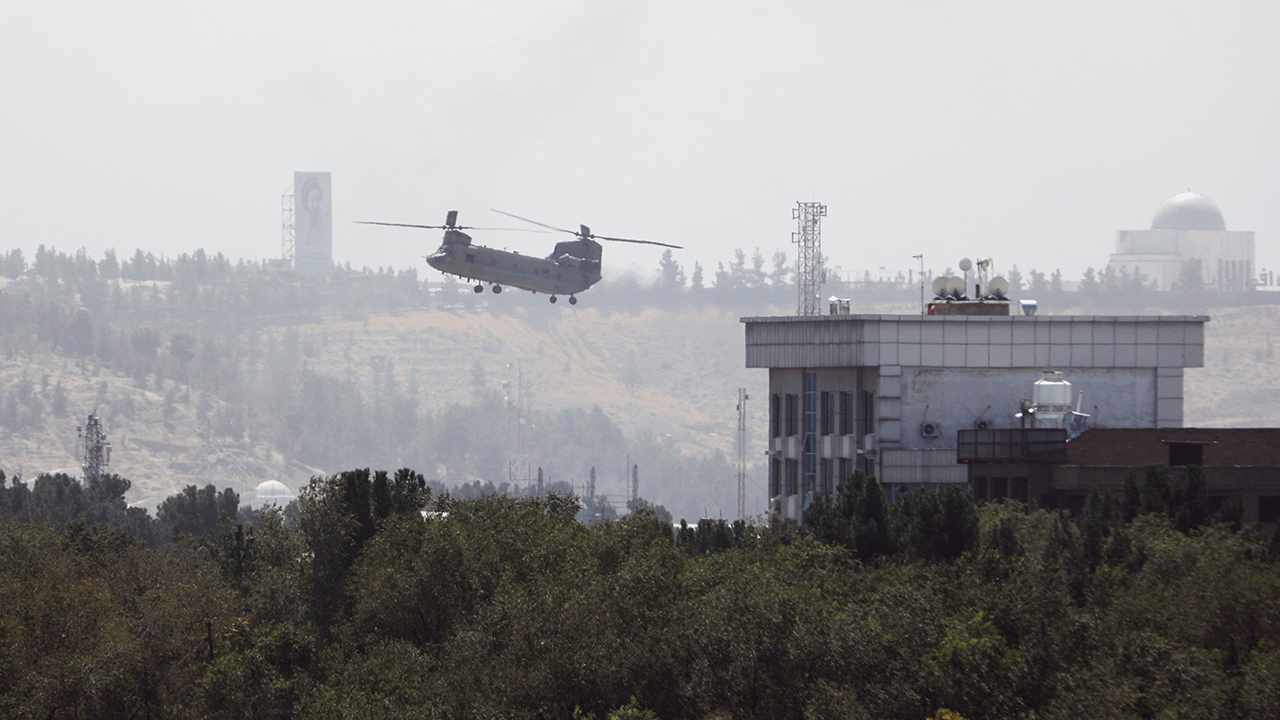 U.S. personnel were evacuated from the U.S. Embassy in Kabul, the Afghan capital, as Taliban insurgents broke through the city’s defensive line on Aug. 15. — Rahmat Gul/AP

I have seen this movie before. Arrogant Americans come to a country and try to remake it in their own image. They ignore the history and culture of the locals. Billions of dollars are poured into training and equipping a military that is led by a corrupt government that has little popular support. American troops help prop up the regime at a cost of thousands of casualties.

American politicians know the war is unwinnable but lie about progress rather than admit failure to the American public. When American voters sour on the war, America withdraws. The American-trained army is vanquished by a poorly equipped but dedicated insurgency.

Chaos reigns as friends and allies are left behind at the mercy of their enemies. Politicians, commentators and think tank experts who supported the war blame everyone except themselves for the loss.

We saw this all in 1975, with the fall of Saigon. Why do we have to watch it again? Can we learn nothing from experience?

In both countries we did not understand local politics and thought the solution was a strong central government. Although we talked about winning hearts and minds, our alliances with corrupt leaders and our military tactics alienated local populations.

In both countries, the relatively rapid turnover in American diplomats, trainers, advisers and aid workers made it impossible for them to truly understand the situation and establish the personal relationships necessary to work with the locals.

In both countries, large infusions of American troops and money led to dependency and corruption. Political and economic elites fought each other for power and dollars rather than cooperating in a battle against their common enemy.

As in Vietnam, the Afghan war was botched by both Democratic and Republican administrations. Early on, we were warned not to make the same mistakes as the French in Vietnam. Early on, we were told that Afghanistan is the graveyard of empires, which defeated both the British and the Russians. But we thought we were smarter and more powerful than the French, British and Russians. Instead, we made the same mistakes they did.

Presidents Joe Biden and Donald Trump were correct in pulling our troops out of a failing war in Afghanistan, but the pullout has been chaotic. The State Department has been too slow in issuing visas to those who helped us and are now at risk. Too much time was wasted with security checks and health screenings. Too many agencies had to give clearances when it should have been sufficient to rely on the recommendations of military officers and aid workers. Luckily, the Taliban has so far agreed not to interfere in the exodus, but how long that will continue is uncertain.

Unlike Vietnam, Afghanistan has no access to the sea, so we cannot use ships to remove large numbers of people. The Taliban already controls the border crossings, but even if they did not, what American ally would want to go to Iran or Taliban-controlled areas of Pakistan? That leaves the Kabul airport as the only way out.

In December 2019, The Washington Post published more than 2,000 pages of internal government documents produced by the Office of the Special Inspector General for Afghanistan Reconstruction as part of a “Lessons Learned” project. Called The Afghanistan Papers by the Post, the analysis has many points similar to those on Vietnam in the Pentagon Papers, leaked by Daniel Ellsberg in 1971.

In a series of articles based on the papers, Post reporter Craig Whitlock detailed how “Afghan security forces’ wholesale collapse was years in the making,” “how U.S. leaders deliberately misled the public about America’s longest war” and how the “Afghan war was plagued by mendacity and lies.”

Practically everything he writes about the Afghanistan War has been said about the Vietnam War. Why do we keep making the same mistakes?

Almost 56 years ago, Pope Paul VI at the United Nations cried, “No more war, war never again.” America must learn its lesson and not think that its military can solve every problem in the world. We cannot impose our values and institutions on people who don’t want them. It is time to learn some humility.