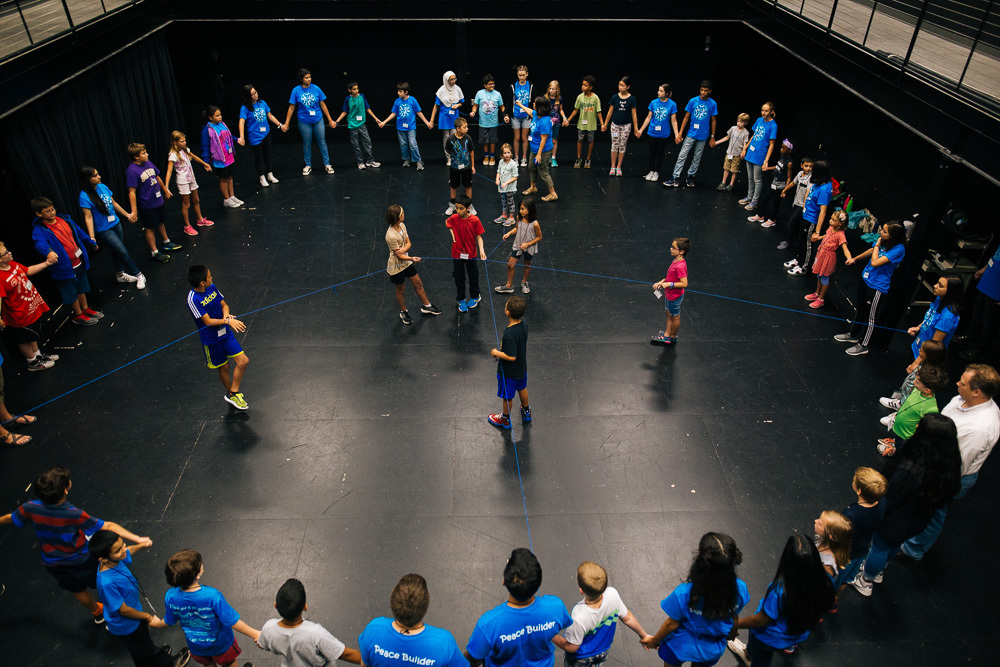 IPC participants are introduced to the 3 faiths present at the IPC. Islam, Christianity, and Judaism. While explaining how those belief systems form, students form a peace sign with string.

Photo: On the first day of the 2017 Interfaith Peace Camp at Eastern Mennonite University, Frances Flannery of the Beth El Congregation and other representatives of the three Abrahamic religions explain their shared genealogy and use blue yarn to trace the branching out of the faiths from Abraham, ultimately forming a peace sign. (Photo by Andrew Strack)

At times the scene may have looked like typical summer camp fun with crafts and art, singing and playing rhythm instruments, and sharing meals, but for 33 campers ages 7-12 and 14 junior counselors ages 13-18 — and for its dedicated organizers — the eighth Interfaith Peace Camp (IPC) at Eastern Mennonite University, Harrisonburg, Virginia, had an additional, bigger mission: “Building Bridges, Building Peace.”

A program of the university’s Center for Interfaith Engagement, the five-day camp brings together children from Jewish, Muslim and Christian backgrounds to engage with each other and the three monotheistic religions that trace their lineage back to Abraham.

The camp first took place over three days in 2008 and was recently cited as inspiration for a similar event at King’s University College in London, Ontario. The ongoing mission statement reads, “In the spirit of joy and curiosity, IPC builds friendships, values differences, and celebrates similarities among diverse faith traditions, with a special focus on Abrahamic faiths.”

This year six campers were from Muslim, one from Jewish, and 23 from Christian faith traditions, and three identified outside of the Abrahamic faiths. Ten junior counselors were Muslim and four were Christian, and the two teaching assistants were Muslim.

The week’s activities reflected the bridge and peacebuilding theme. For example, a project with tissue

boxes, rubber bands, and paper clips to build a bridge for an orange to roll across elicited encouraging comments: “Try it on the other side!” “Give them another chance!” and, in light of struggling to find a design that worked, “Redo, redo, redo!” In another, a version of freeze tag led by Matthew Overacker, a recreation leadership and sports studies major completing a summer practicum at the camp, students used pool noodles to partner with each other to build bridges in order to “unfreeze” other players.

On the first day of the camp, James Madison University professor Frances Flannery of the Beth El Congregation, Jeff Carr of the Bridgewater Church of the Brethren, and Zohaib Afridi of the Islamic Association of the Shenandoah Valley introduced the three Abrahamic religions by describing their shared genealogy and different ways of connecting with the divine: Jews through the Torah, Christians through Jesus, and Muslims through the Quran. In subsequent days, campers learned more specifics about each tradition.

Campers visited the three local faith communities for a tour, a presentation about the religious beliefs and practices of each faith, and a mid-day meal. At the Islamic Center, for example, campers learned about the 99 names of God, that worshipers to show respect remove their shoes before entering prayers, and a traditional meal blessing: “In the name of God, and with the blessing of God.”

The visits are a key element of the camp, said director Carrie Dengler Wenger. “Campers get to visit a space that feels familiar to them, where they get to be leaders and therefore strengthen their identity in their faith. They also visit two other spaces that may not feel as familiar. For many, they are entering a Christian church, Jewish temple or Muslim mosque for the first time. Their curiosity is ignited and we encourage them to engage their curiosity by asking questions. Each house of worship welcomes us, shows us around, answers our questions, and feeds us lunch. Suddenly these spaces become safe spaces for everyone. Our fears are diminished. The ‘other’ becomes a neighbor and friend. This is a ‘heaven on Earth’ experience.”

while also helping to facilitate connections between people, the earth, and the divine, she said. “It has been so meaningful to watch the kids discover these. I love being able to help them make those connections through food, since we all have to eat!”

Just days later, Flannery said, circles of campers formed a safe space in which campers were invited to share “something that helps show the real you.” The personal connections and celebrations of uniqueness were “magical,” she said.

The camp is a powerful experience not only for the campers, but also for the interfaith staff. “We are modeling what we want for the kids, but we are also getting that experience,” said Mike Deaton, a Christian who has helped organize and lead music for several years.

Zohaib Afridi was a child when the camp began in 2008. Summer camps weren’t something he liked, he thought, but he ended up attending IPC in his sister’s place — then kept coming as a camper and junior counselor, and now is a staff member. “The biggest impact of the camp is the people,” he said, “and how friendly they are even though they’ve never met each other before.”

Staff member Rehab Mansour said that she hopes the camp will “teach campers how to find ways to communicate and deal with others with love and respect. I hope that they can do what previous generations missed, that they can come up with a better way to fulfill our dreams.”

That openness to ongoing interfaith connection and peace takes thinking ahead and proactive reaching out, something that campers saw firsthand when a student asked about the construction happening in the middle of the Islamic Center’s ceiling. Presenter Dr. Nabeel Babar explained that it was for a new dome that campers will be able to see eventually — “When you come next year,” he said.

“I hope Interfaith Peace Camp helps move our community beyond mere coexistence,” said Dengler Wenger. “We envision a community where our interactions are driven by a desire for understanding, mutual respect, and love. Shalom. Inshallah. May it be so!”