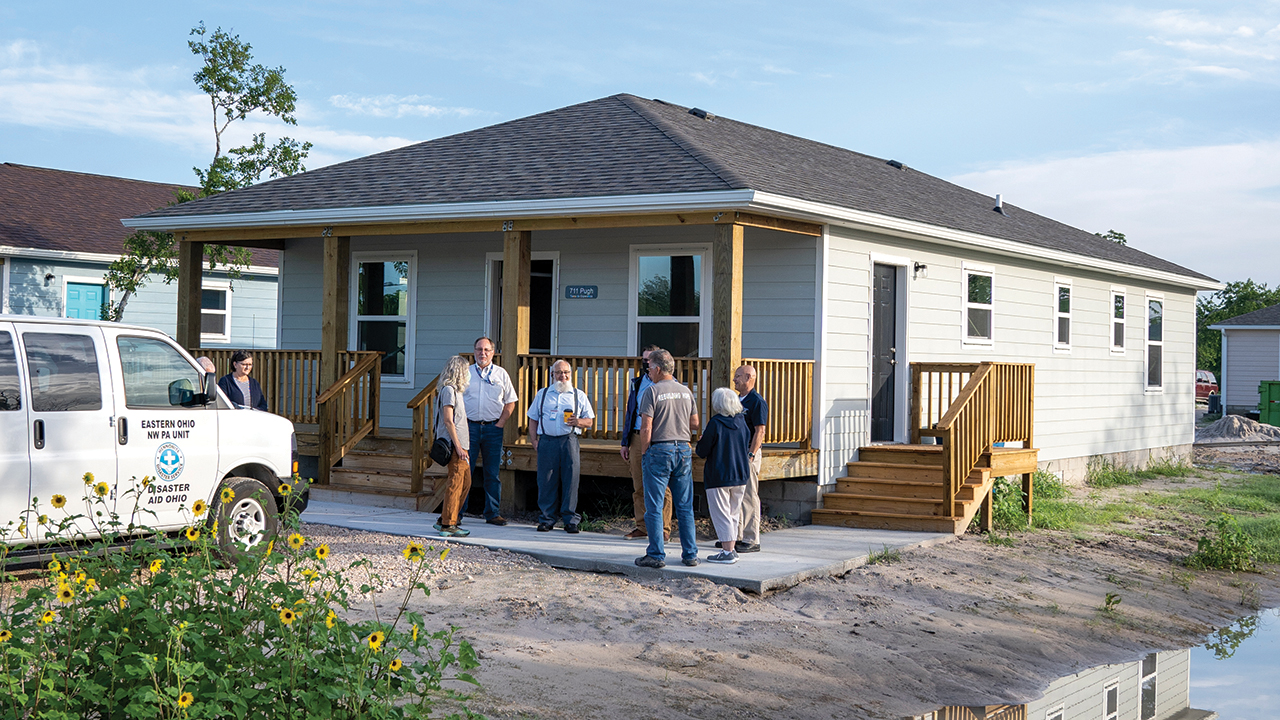 Three years after Hurricane Har­vey, a new community has opened doors to hope for 23 families in a Texas small town.

Mennonite Disaster Service and Disaster Aid Ohio, in partnership with the Coastal Bend Disaster Recovery Group, dedicated the last 13 homes in the Tierra de Esperanza (Land of Hope) community May 20 in Woodsboro, completing a three-year effort.

Disaster Aid Ohio is an Amish group affiliated with MDS.

At a dedication ceremony at Sainte Therese Catholic Church, Christopher Brandt, executive director of the Coastal Bend Disaster Recovery Group, described how Tierra de Esperanza began when a small group of visionaries refused to give up, despite an initial lack of resources in Woodsboro, home to 1,344 people hit hard by Hurricane Harvey in 2017.

“All the people who participated in this program did so out of the goodness of their hearts,” Brandt said.

That goodness brought to completion the 3.6-acre neighborhood, about 40 miles north of Corpus Christi, valued at $2.3 million. The first 10 homes were dedicated in March, not long after a winter storm in February caused still more damage to homes and economic hardship.

“Who could ever build 23 houses during a pandemic amid soaring labor costs?” Brandt said. “You all are the ones who did it in such challenging times.”

“This is what happens when we come together beyond whatever differences we have: the beauty of having a home,” he said. “For those receiving homes and keys today, congratulations.”

Woodsboro mayor Kay Roach said the completion of Tierra de Esperanza doesn’t mean recovery from Hurricane Harvey is over. The storm caused $125 billion in damage, according to the National Hurricane Center — more than any other natural disaster in U.S. history except Hurricane Katrina.

“I hope the relationships we’ve made here aren’t over, because we have so much more to do,” Roach said. “God has given us the opportunity to make changes.”

Atlee Kauffmann, who coordinated the work of volunteers from Disaster Aid Ohio, agreed that Tierra de Esperanza was able to go from a vision to reality because people were willing to build genuine relationships even under post-disaster duress.

“In Ohio, when we first heard about Hurricane Harvey, we had no idea how many lives had been impacted,” he said. “It’s amazing what can be done if everyone works together and nobody is concerned about who gets the credit.”

MDS Hurricane Harvey coordinator Tom Smucker recalled the conversation in early 2019 that sparked the vision for Tierra de Esperanza. MDS’s involvement began when Christine Cornejo — at that time president of the Rebuild Texas Fund — contacted Smucker asking how MDS could help in Woodsboro.

“She pushed and pushed to get MDS to come down to Refugio County and see what they have here,” he said. “It began with a vision and with tenacity.”

By the time Donna Rosson, board president of the Coastal Bend Disaster Recovery Group, heard what Cornejo and Smucker were cooking up, she realized this was the biggest disaster-recovery effort the small town had ever seen.

“I probably looked like a deer in the headlights,” she said. “But everybody had their own niche and their own jobs to do, and we all worked really well together. It took an army of willing souls and hundreds of skilled hands and big hearts.”

The 23-home community will change the lives not only of the occupants but also of generations to come.

After homeowners received their keys, many went straight to their homes to unlock the doors for the first time.

Eleasar Franco drove two hours to see Edna Sue Franco, his sister, receive her keys. As her brother pushed Edna Sue’s wheelchair up a ramp through the front door, her face lit up.

“Look at that kitchen,” she said. “It’s gorgeous.”

She wheeled over to the kitchen table, gently touching the surface.

“Somebody needs to do some cooking,” he laughed.