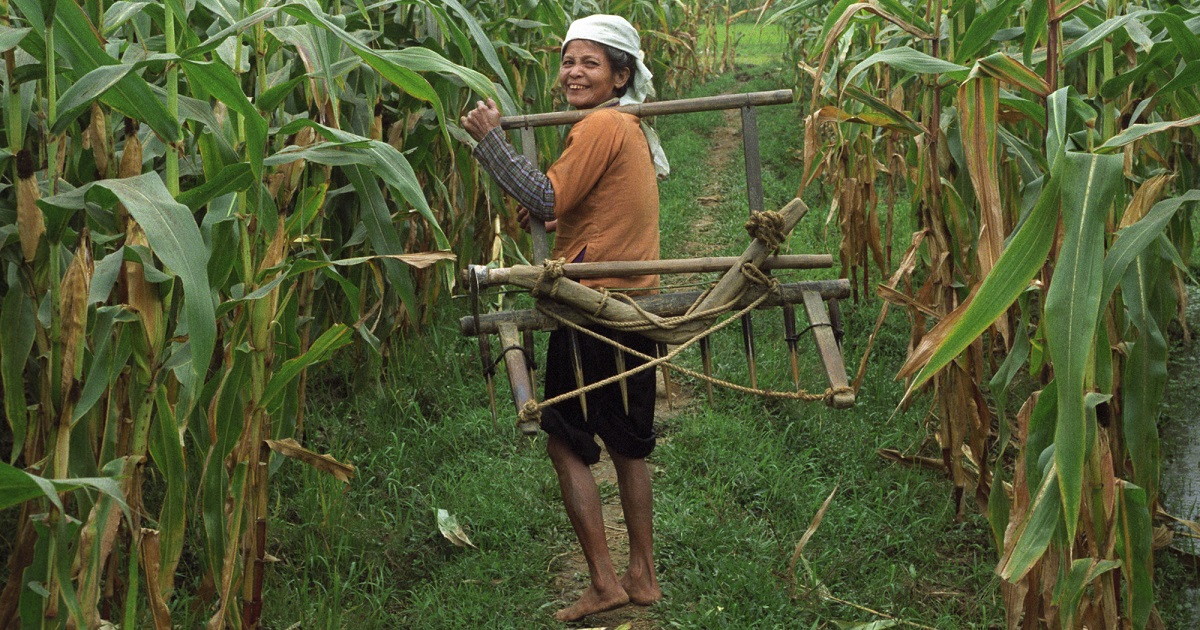 Tha Thi Ke, 60, stands in her family’s first cornfield in 2001 carrying a wooden harrow used to prepare the soil for planting. In 2001, only a quarter of the land throughout Vietnam was tillable, yet about 75 percent of the population depended on agriculture for its livelihood. MCC, working with local government officials, encouraged farmers in Vietnam’s Phu Tho Province to grow winter corn crops and find other ways to supplement the income from their rice yields. The previous year, Ke and her family, along with 100 other families, planted and farmed a test plot of corn. With additional resources like corn, struggling farmers were more able to remain on their land and families not be affected by economic migration.

Photo: Tha Thi Ke stands in her family’s first cornfield in Vietnam’s Phu Tho Province. In 2001, MCC encouraged farmers to grow winter corn crops and find other ways to supplement income from their rice yields, helping them remain on their land rather than being forced to migrate. MCC photo/Jack Leonard

With income falling short due to the COVID-19 pandemic, Mennonite Central Committee is ending programming in several countries, cutting its workforce and canceling for this year an international exchange program in Canada.

“MCC U.S. and Canada are making a 25% reduction in core budget for international programs,” said J Ron Byler, executive director of MCC U.S., in an interview. That figure represents an approximately $6 million cut.

In a May 20 release, MCC announced that programming will end in China, Vietnam, South Africa and the southern African nations of Lesotho and Eswatini, and that it will make significant changes in other regions.

Amid international program closures and transitions, at least 13 positions — held by international service workers and national staff — will end this fiscal year.

The decisions were painful and difficult but necessary, said Ruth Keidel Clemens, co-director of international program.

Byler said the cancellation of relief sales and the temporary closure of thrift shops were the primary reasons for reduction in revenue. Thrift shops alone typically represent about one-third of revenue for MCC U.S.

“Our donors are generous,” Byler said. “This economic challenge is not just for the next month but for the coming year or more. I’m sure that out of this challenge we’ll find some opportunities, but for the time being we’re going to be receiving significantly less resources and want to be good stewards of those resources.”

MCC U.S. received federal loans from the Small Business Administration’s Paycheck Protection Program to cover two months of payroll and benefit costs for staff in the United States. As of May 21, MCC Canada was planning to apply for government assistance but had not yet done so.

MCC will end programming in South Africa, Lesotho and Eswatini, effective in March. MCC’s work in southern Africa began in 1971. Since that time, MCC’s work with local partners has increased food security in selected communities of Lesotho, improved health and education in Eswatini, provided for the immediate needs of refugees in South Africa and contributed toward building resilient and peaceful communities.

MCC will end programming in Vietnam, with all activities completed by March. MCC’s work in Vietnam began in 1954 with emergency relief for families displaced during the country’s civil war. Peacebuilding efforts followed, promoting reconciliation between the United States and Vietnam. More recently, MCC has worked with local partners to help families affected by Agent Orange, providing training in occupational therapy and increased livelihoods.

MCC will end programming in China by July. Since 1982, MCC has placed English teachers through Mennonite Partners in China, facilitated participation of Chinese young adults in MCC’s International Volunteer Exchange Program through short-term volunteer placements in Canada and the United States, and supported social assistance projects.

“We’re grateful for the dedicated and passionate service of MCC staff in all these locations, both past and present,” said Mark Epp, international program co-director, in the release.

“These women and men have built long-lasting and caring relationships with local partners and communities. That’s the beauty of our partnership model — those relational ties have a lasting and ongoing impact.”

Administrative oversight for programming in the remaining 17 African countries where MCC works will be consolidated from three area director couples to two.

MCC’s work in Western Europe will undergo administrative transition, with the representative role based in Strasbourg, France, ending in July. MCC area directors for the region will assume responsibility for the work, which is primarily focused on building connections with Anabaptist churches and agencies in eight countries.

Epp said the decisions were informed by MCC’s core mission and new set of strategic directions put in place by the MCC Canada and MCC U.S. boards to shape the next five years.

“Guided by those directions, we want to focus on the most vulnerable communities where we can have the most impact,” Epp said. “Our goal is to live more deeply into our core mission as funds allow.”

IVEP in Canada has been canceled for the 2020-21 year, resulting in the elimination of all volunteer placements that would have begun in August.

“While we had hoped we could carry the program forward this coming year in Canada, this is no longer the case,” said MCC Canada executive director Rick Cober Bauman in the release. “Uncertainties around securing visas and travel plans, as well as reduced financial resources, led us to this disappointing decision.”

Plans are still in place to host IVEP volunteers in the United States. Other current short-term service programs for young people will move forward as planned, although some with shortened assignments.

Domestic programs in the United States and Canada face many of the same challenges as international programs, with uncertain funding and travel restrictions.

Some layoffs — both temporary and permanent — have occurred in Canada. Open positions in Canada and the United States will remain unfilled for the foreseeable future.

MCC is also reducing expenses with employee benefit cuts, deep cuts in travel and training and additional reductions in multiple budgets with further cuts possible for international and domestic programs, as well as operations.

During the COVID-19 pandemic, MCC has increased projects related to water, hygiene and sanitation, local health initiatives and food relief.