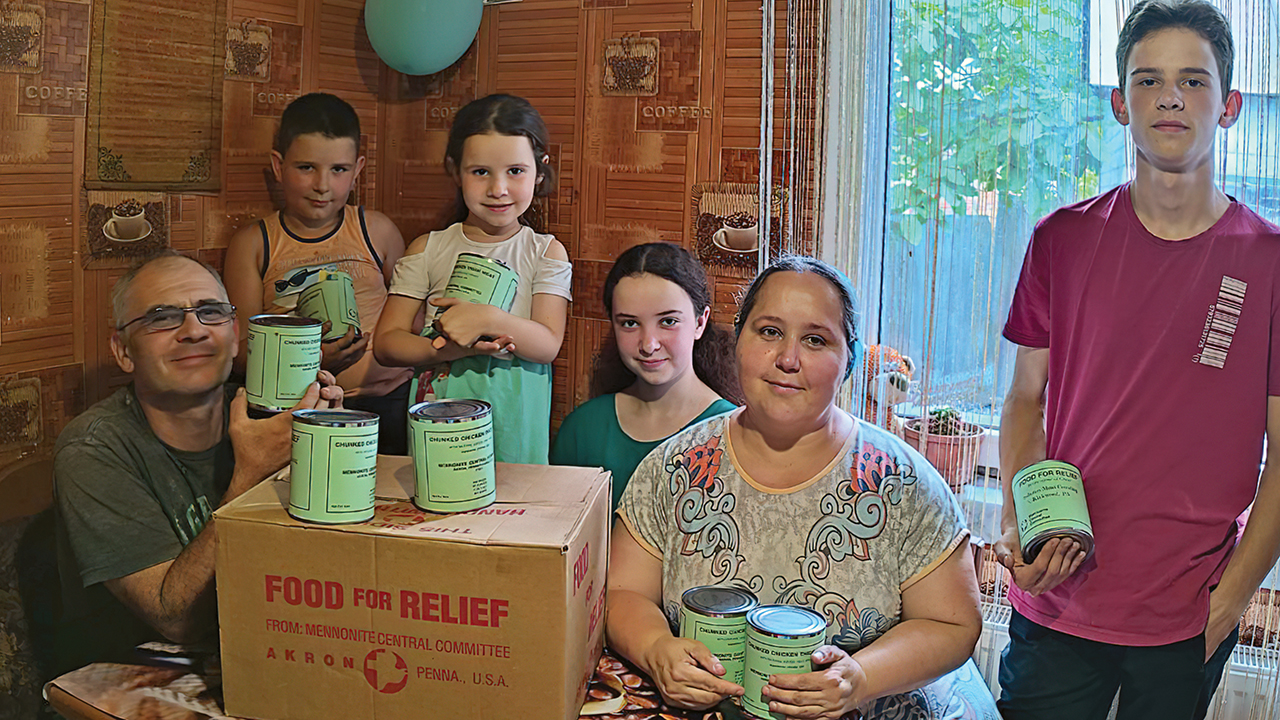 Sasha, left, and Natasha, with four of their five children in the Kharkiv region of Ukraine, received Mennonite Central Committee canned meat this summer. — All-Ukraine Platform for Health Improvement of Society

As Mennonite Central ­Committee begins its 2022-23 meat canning season, the need for food in Ukraine and other countries around the world is growing.

Millions of people have been displaced in Ukraine, and many are without access to food, water and healthcare since the Russian military invaded in February.

MCC’s Ukrainian partner organizations distributed the first shipment of meat over the summer to people affected by the invasion. A second shipment is scheduled for November.

A third shipment is planned in January and February, using turkey or chicken that will be canned this fall, said Tom Wenger, MCC material resources coordinator. Each shipment contains 50,000 to 70,000 24-ounce cans of turkey or chicken.

In the Kharkiv region of Ukraine, Sasha, a father of five children, lost his job due to Russia’s military invasion. Both Sasha and his wife have disabilities, which create additional challenges for them. Their last name is omitted for security reasons.

“Life has become more difficult now,” they said in a message relayed to MCC through its partner All-Ukraine Platform for Health Improvement of Society, or KECB. “We can’t afford meat. But owing to you, we have a supply of stew and can feed the children. This is a great support for our family. Thank you for your help.”

MCC is able to send meat to people in crisis because every year thousands of volunteers across the United States and Ontario purchase meat, preserve it in cans and prepare it for shipping.

The canning season began on Oct. 3 in Sterling, Ohio, and will continue through April 27 in Leamington, Ont. An MCC canning crew will transport the mobile cannery to 31 locations.

The crew works with volunteers at each site to make sure the meat is canned according to the standards of the U.S. Department of Agriculture.

“MCC’s meat canning is a roll-up-your-sleeves ministry,” said Joe Miller, MCC U.S. canning associate. “It is amazing and thrilling to be a part of a local community of Mennonites and Amish coming together, working hard and producing food for hungry people.”

Not only is the meat good for people around the world, the service activity can be fulfilling for the volunteers.

“We needed this event,” said Keith Zehr, pastor of Lowville Mennonite Church in New York, about last year’s canning. “It was so life-giving for our churches and even non-Anabaptist neighbors to work together to help hungry people around the world.”

Miller hopes this season will be more productive than last year as people are adapting to life with COVID-19.

In the last two years, MCC needed to reduce the number of locations for safety purposes, but last year volunteers still canned 353,946 cans of meat. This year, the cannery will return to all the locations that were used before the pandemic.

Local canning committees, which buy the meat they process, must still deal with high prices of meat. The prices increased significantly last year.

In October 2021, the price of turkey was high, and chicken thigh meat was double what it was the year before. This fall, chicken is less expensive than last year, but turkey will remain high for the season.

Even so, Miller anticipates a fruitful year.

In addition to shipping meat around the world, a significant portion of the meat went to families in the United States. Each of the 31 canning locations may keep 10% of the canned meat for local food banks.

Back in Ukraine, canned meat was helpful to Anastasia and her husband and newborn baby.

She was eight months pregnant when Russian soldiers came to her family’s home in the Zaporizhzhia area. She was forced to flee with her husband and eldest daughter. To leave the region, they were obligated to give the soldiers all their savings.

It took them five days to arrive in Borisovka, Ukraine, where they were able to obtain housing, and Anastasia soon gave birth to a son. MCC’s partner, New Life Charitable Foundation, provided the family canned meat, comforters, hygiene supplies and other items.

Parents of another family with nine children sent their thanks through KECB: “A thousand thanks for the stewed meat. The father of our family lost his job because of the war, so we cannot buy fresh meat, and your help is a great support for us. Thank you. May God bless you.”