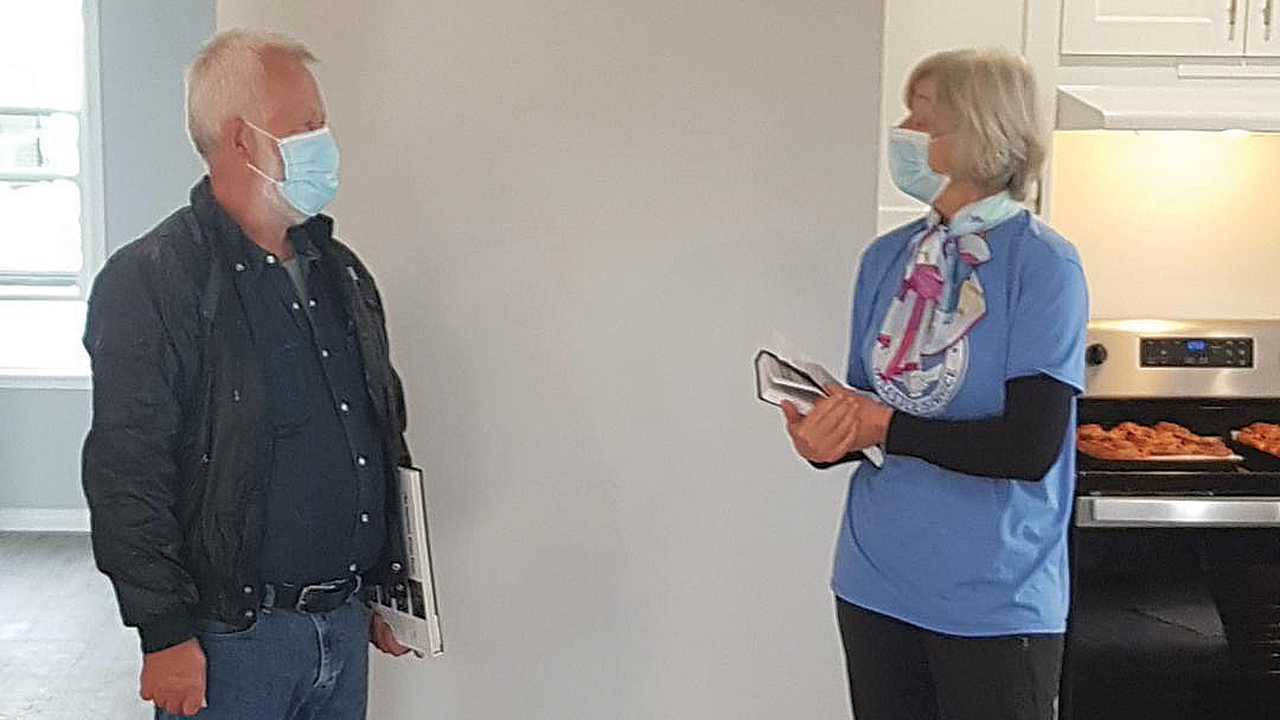 Safety is always a priority for Mennonite Disaster Service. Today, that includes taking precautions against COVID-19.

MDS implemented new safety protocols for the first house-building project in Canada during the coronavirus pandemic.

“We told ourselves before we started, we don’t want to be doing anything we wouldn’t want the media to see if they dropped in un­announced,” said Peter Thiessen, co-director with his wife, Susan, for the MDS Canada project in 70 Mile House, B.C. “When the project was over, we wanted to be able to tell a safe, simple and clean story.”

By all accounts that’s exactly what happened at the project, which began in early August and ended with a home dedication on Sept. 24.

At 46 days from start to finish, the house was completed in record time for MDS.

“We wanted to get in and out fast,” Thiessen said, noting they wanted to limit the amount of time volunteers would be together.

A combined effort of the MDS British Columbia and Alberta units, the project — in a remote area 100 miles northwest of Kamloops — found volunteers rebuilding a house destroyed by a wildfire in 2017.

To adhere to COVID-19 guidelines and keep everyone safe, a modified RV project model was used, said Henry Warkentin, who co-directed with his wife, Elizabeth.

For Warkentin, of Coaldale, Alta., this meant volunteers had their own accommodations, and everyone had to practice social distancing or wear a mask when that wasn’t possible.

Volunteers were told to use their own tools. When tools had to be shared, they were sanitized after each use. Everyone who visited the site had to register names and phone numbers for contact tracing.

Food was served by the cooks — no buffet-style line-ups — and volunteers ate at separate tables 6 feet apart outdoors, said Susan Thiessen, who served as a cook.

Another change from normal MDS practice was no group singing.

“We still had a devotional each morning,” Warkentin said.

Despite all the new rules, the project went well.

Abe and Shirley Goetzke of Abbotsford, B.C., served at the project for a week.

“We felt so safe there,” Shirley said. “It was run carefully and efficiently.”

Before they went to 70 Mile House, some family members were worried about the retired couple doing service with MDS during a pandemic.

“We were so glad to come back and say MDS was so careful and the project was so well run,” she said.

For Warkentin, the project not only met the goal of providing the homeowner with a new house but “gave a good witness to the community.”