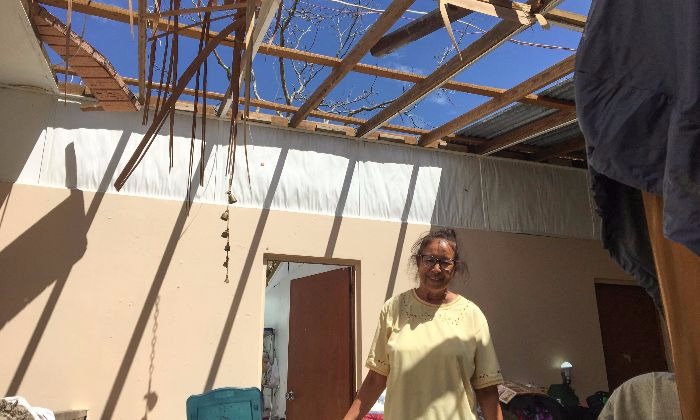 After several failed attempts, Mennonite Disaster Service (MDS) regional operations coordinator, Larry Stoner, arrived in San Juan, Puerto Rico, on Sept. 26, to begin a 10-day assessment of the situation there and to explore how MDS will assist.

“I landed at noon yesterday,” Stoner said in a phone call this morning. “The airport was hot and stuffy and filled with thousands of people trying to get out.”

Once outside the airport he noticed that “every single gas station had a least a hundred cars waiting in line.” He said, “The bigger issue is there is no electricity.”

Communication has been spotty as cell towers were toppled by the storm and his U.S. Verizon phone was not working well so he called on the phone of a local contact working with MDS.

Despite the challenge finding fuel there were still many cars on the streets in San Juan, he said.

“Downed trees and tree debris is everywhere in San Juan,” Stoner said. He added that in the city there are damaged buildings but there are also a lot of buildings that survived the hurricane. “It looks very bleak for the immediate future,” he said.

Hurricane Maria slammed into Puerto Rico more than a week ago, devastating the U.S. commonwealth. The situation has worsened since then as people are running low on water and food, the electricity and communication networks are spotty at best and there is a 7 p.m. curfew in San Juan.

To contact the MDS office in Lititz, Pennsylvania, Stoner had to borrow the phone of a contact there and find a place along the road where there was a cellular signal. Even then, recharging the phone is a challenge because of the lack of electricity. Stoner also has a satellite phone and his own Verizon-based phone, but neither are connecting.

Thursday Stoner planned to travel to Aibonito where the local Mennonite school and hospital have been damaged. “I heard that the 4th floor of the hospital was destroyed,” he said.

“The purpose of Larry’s visit is to connect with our MDS Puerto Rico Unit and their churches to begin assessing the damage and where MDS will respond,” Kevin King, MDS executive director said on Tuesday. “We will be responding, we will be rebuilding, but we just can’t say where and when until we can get there and conduct an assessment.”

When in Puerto Rico, Stoner who is from Lititz, Pa., is expected to quickly focus on the town of Aibonito and the surrounding area in the center of the country where the MDS PR Unit headquarters are located. He learned on Tuesday that the unit leader, Eileen Rolon, lost the roof on her house.

King has heard from a Mennonite pastor in Hatillo, PR that the front of their church and roof are gone.

Pastor Hector Lugo told King that “in all my years of living in Puerto Rico I have not seen worse conditions. The water supply is intermittent. No electricity.” He also said he waited in line for eight hours for a gallon of gasoline.

Lugo told King that he was hoping to get out to visit his congregation members, but can’t without gas. “The roads are opening up but there is massive destruction everywhere,” he said to King.

King hopes to be in Puerto Rico next Tuesday, October 3, along with MDS Region 1 board chair Phil Troyer and Elizabeth Soto, a professor at Lancaster (Pennsylvania) Theological Seminary who is originally from Puerto Rico and has family there.

MDS is accepting financial donations for the Hurricane Maria response. Persons wanting to volunteer for Puerto Rico should go online to register.