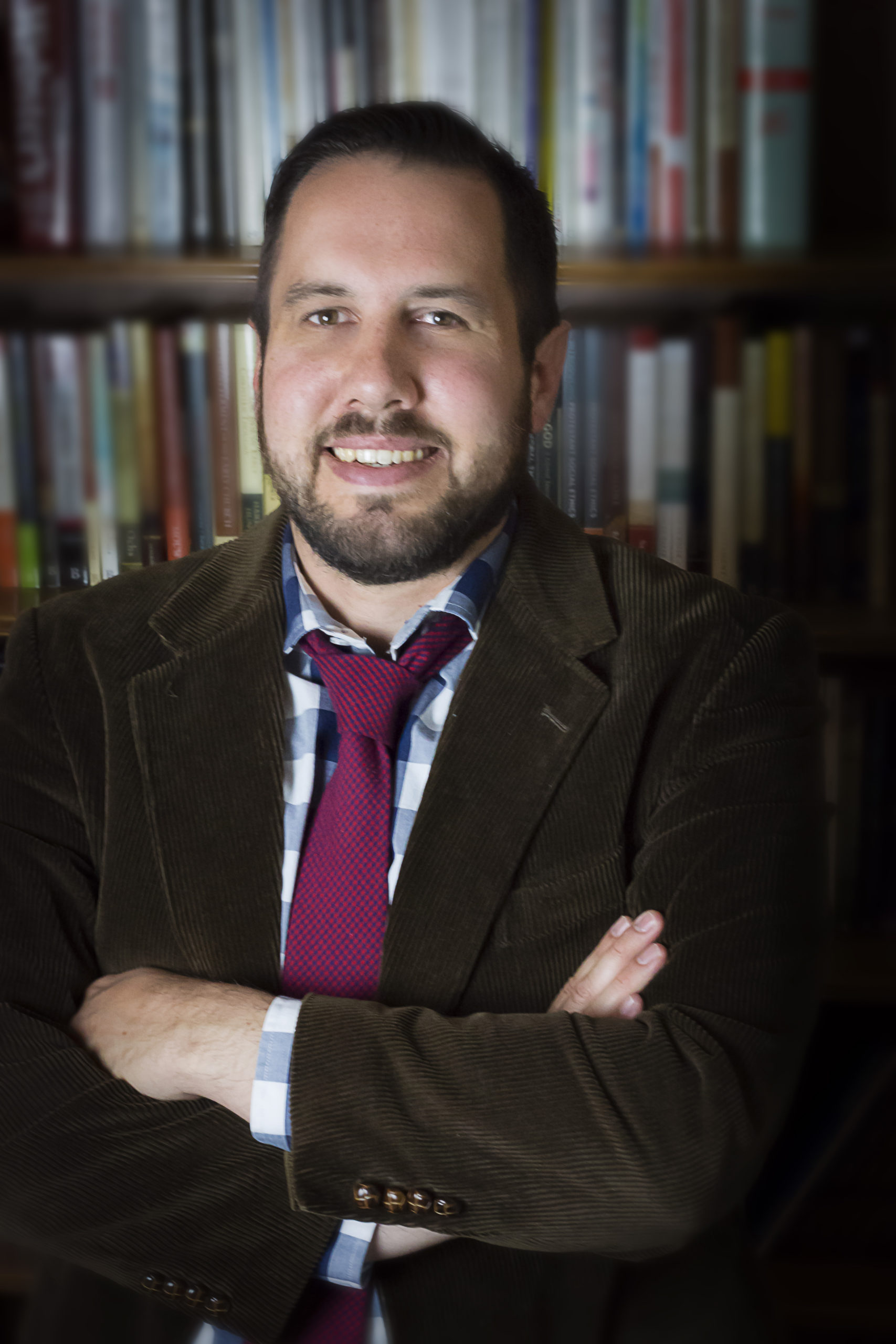 Growing up as an evangelical in northern Indiana, I knew of two kinds of Mennonites: the kind I encountered at Das Dutchman Essenhaus and the kind I encountered at Goshen College basketball games with their regional rival, Bethel, which eventually became my alma mater. The first kind I had trouble distinguishing from the Amish, though I thought it had something to do with their willingness to drive cars. I may have known vaguely that they practiced nonresistance, but that peculiarity was less interesting to me than their peanut butter pies. The second kind was more worrisome. I knew they were pacifist, and their pacifism seemed political in precisely the kinds of ways I was taught to avoid.

Imagine my surprise when I discovered in college that I, too, was Mennonite. In a denominational history course, I learned that my home denomination, the Missionary Church, was the result of a merger between two denominations, one of which was called the Mennonite Brethren in Christ until a name change in 1947 dropped the words “Mennonite,” “Brethren” and “in Christ.” At the time of my discovery, I knew only one person in my denomination who was pacifist, and he was the one teaching the course.

As I tried to make sense of Mennonites and pacifism, I did what a lot of evangelicals I’ve met over the years have done: I drove to the local Family Christian Bookstore and bought a copy of John Howard Yoder’s The Politics of Jesus (which, oddly enough, was included as a volume in the Christian Family Library series). After an unsuccessful first attempt at reading it, I returned to it in seminary and found that I was becoming the kind of pacifist I had been warned about.

My path from there is a familiar one: I read everything Yoder wrote that I could get my hands on, took him to be the exemplar of Mennonite pacifism, became an outspoken pacifist apologist myself and decided to go to grad school so that I could become a (Yoderian) theological ethicist.

Then, after reports by Ruth Krall, Barbra Graber and Rachel Waltner Goossen made public the gravity and extent of Yoder’s predatory behavior toward women across the church, I not only found myself shorn of a theological hero (or, perhaps more accurately, a theological idol) but also began questioning the basis for Mennonite pacifism. I had championed the idea that the church is the alternative to the world’s violence, only to find that the church was the very site of a sexual violence, a kind of violence I had culpably ignored. This led me to grapple with the Mennonite peace tradition anew.

Since I had so equated pacifism with Yoder, my understanding of the development of the Mennonite peace witness in the 20th century had mapped onto the development of Yoder’s thought. I believed the Mennonite church had slowly evolved from a simplistic apolitical pacifism (nonresistance) to a more sophisticated political pacifism (nonviolence). But not only was this narrative self-serving—in that it reinforced the views I espoused—it also had the effect of flattening out the rich diversity of Mennonite thinking on violence and war. In place of a simple developmental or evolutionary narrative, I’ve now come to view the Mennonite peace witness as what philosopher Alasdair MacIntyre calls a “tradition” in his book After Virtue: a “historically extended, socially embodied argument, and an argument precisely in part about the goods which constitute that tradition.”

While this socially embodied argument can be traced back to the 16th-century Anabaptists, its modern genesis is from a less familiar source: Union Theological Seminary theologian Reinhold Niebuhr. As a mainline Protestant pastor in Detroit in the 1920s, Niebuhr espoused the kind of politically activist pacifism associated with social gospel figures like the great (Ana)baptist theologian Walter Rauschenbusch. But as Niebuhr engaged with labor issues in Detroit and observed from afar the rise of Hitler in Germany, he grew increasingly weary of pacifists’ seeming naiveté regarding the power dynamics of social structures.

By the time Niebuhr published his book Christianity and Power Politics in 1940, he had thoroughly abandoned his earlier pacifism. In the book’s lead essay, “Why the Christian Church Is Not Pacifist,” he argues that the nonresistant ethic of Jesus is “normative” but “not immediately applicable to the task of securing justice in a sinful world.” Niebuhr commends Mennonites for disavowing the relativities of politics and social justice in their single-minded attempt to follow the norm of Jesus’ ethic, while he criticizes politically active pacifist Christians for “diluting the ethic of Jesus for the purpose of justifying their position.”

In the wake of Niebuhr’s critique of pacifism—as well as the second World War, which seemed to many to confirm his views of politics and power—Mennonites reformulated their peace convictions in a variety of ways. Some, like the Mennonite Brethren in Christ, simply conceded that, though war is evil, it may at times be the lesser of two evils. But most attempted to maintain their peace witness in some form while responding to Niebuhr’s critiques.

Yoder’s responses are perhaps most familiar. Early on he agreed with Niebuhr’s understanding of Jesus’ nonresistant ethic but argued that the nonresistant Christian can nevertheless offer counsel to politicians on how to most closely approximate the ethic of Jesus in the political realm. Then eventually Yoder argued that Christians can themselves engage in forms of political pacifism that share many similarities with Gandhian nonviolence.

But Yoder wasn’t the only Mennonite to respond to Niebuhr. By 1991, no less than 10 distinct types of contemporary Mennonite peace theology were identified in the booklet Mennonite Peace Theology: A Panorama of Types, published by the Mennonite Central Committee Peace Section. Niebuhr’s thought lurks behind many of these types. The historic nonresistant view associated with Guy Hershberger, for instance, affirms Niebuhr’s distinction between nonresistance and nonviolence and calls Mennonites to eschew the latter in favor of the former. On the opposite end of the spectrum is the radical pacifism of Ron Sider, who argues in his book Christ and Violence that “activist nonviolence rather than nonresistance is the more faithful application of New Testament teaching.” Most of the views fall somewhere along the spectrum between these two in an attempt to respond either implicitly or explicitly to Niebuhr.

Most recently, Mennonite theologian Malinda Elizabeth Berry has proposed a provocative new type that she calls “shalom political theology.” Instead of viewing Niebuhr primarily as critic who must be overcome, she suggests using Niebuhr as a resource. As she writes in her Union Theological Seminary dissertation, “Niebuhr’s theological anthropology is indispensable…because his understanding of human nature not only accounts for sin but requires that we consider the power dynamics of groups as well. When Christians advocate for social change and transformation, believing our cause to manifest God’s love and justice, we are flirting with ideology. When our theology becomes ideological, which routinely happens with pacifism, then our grounding has shifted beneath us: We are no longer grounding our call for moral action on prophetic faith…but idolatry and pride.”

Some might view the lack of a unified Mennonite peace theology as a hindrance to our collective witness. But, following Berry, I suggest that it be viewed as a gift. It keeps our witness from calcifying into an ideology, and it humbles us to realize that peace is not something we can claim to have fully grasped, much less to have achieved. While I don’t claim to know the directions the Mennonite peace witness will take as we enter further into the 21st century, I am grateful for the chance to join this “historically extended, socially embodied argument” already in progress.

Only a fraction of our original features and columns are published online. Subscribe or make a donation today to support the work of The Mennonite, Inc.