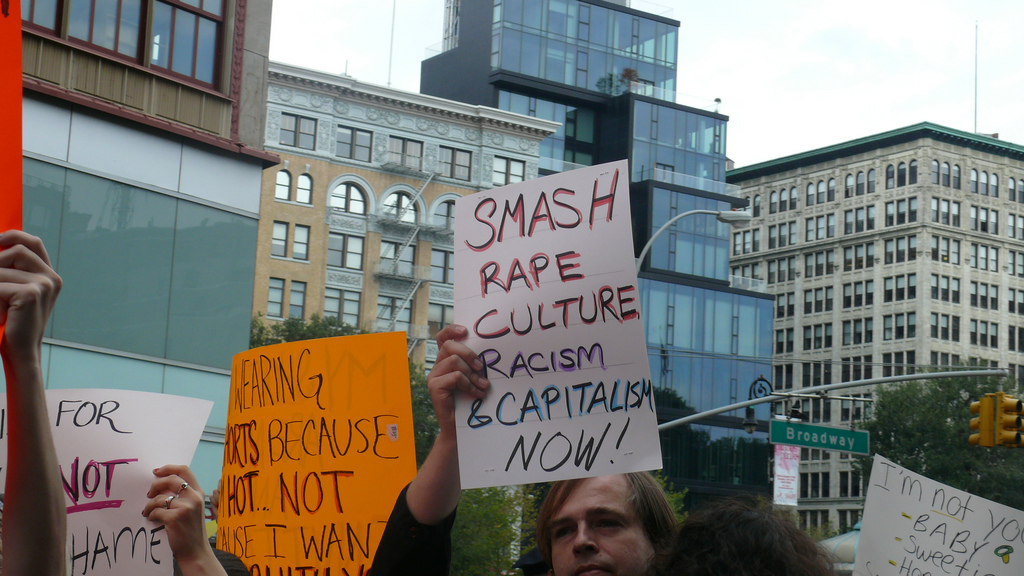 This week we’ve seen audio of Donald Trump’s bragging about sexual assault open up a nationwide conversation about rape culture, which is the set of beliefs and ideologies which blame victims of sexualized violence and normalize sexualized violence, often by men (for more, see this series of definitions).

U.S. Presidential elections are like conversations around a giant water cooler. For a brief time the themes in the elections shape our conversations in the U.S. (and beyond) for better or for worse. These spaces are an opportunity for us.

In the last day, three more women have stepped forward to describe Trump groping, assaulting and kissing them without consent. These accounts join a long list of existing allegations against Trump by women. Two of these stories were reported in The New York Times and one in People magazine.

It’s easy for Mennonites to dismiss these stories as salacious reminders of the evil that is out there in the world, shake our heads and thank God that we are not like “them.” We cannot get off so easily. The poem “nonresistance, or love Mennonite style” by Mennonite poet Di Brandt reminds us that our collective culture enables sexualized violence, too. She writes:

you remember the look on
your mother’s face when she makes
herself obey your dad & meanwhile her
body is shouting No! No!

The project Our Stories Untold has documented dozens of stories of sexualized violence in Mennonite communities.

In the gospels, we see Jesus interacting with women in ways that turn upside down the ways other men in society treated them. Last February at the Bartimaeus Institute, I saw theologian Ched Myers bring the story of the woman anointing Jesus’ feet alive in a new way. Myers’ highlights the importance of Jesus’ actions while questioning Simon the Pharisee:

“Then turning toward the woman Jesus said to Simon, “Do you see this woman?” (Luke 7:44) Let us not miss the politics of the gesture here: Jesus is looking at the woman but talking to the host (demonstrate this with a group of three to really see its power). Simon is painfully aware of this woman’s unwanted and inconvenient presence at his party, but her humanity is invisible to him behind the mask of his social label. So this question is not rhetorical: Simon hasn’t really seen her—not as a person yearning for dignity and freedom… and love (the moral of the parable). From “Do You See Her?”

In this and many other ways, Jesus calls us to recognize the humanity in those we are taught not to see or hear.

We were taught it was our fault

This week, inspired by Trump’s words, thousands of women shared their stories of sexualized violence on Twitter. This wider conversation is an important opportunity for us, especially cis men, to educate ourselves and our communities. Those of us who benefit from male privilege have a special responsibility to challenge other men and boys on the ways in which we participate in and perpetuate a culture that blames victims and tells women that unwanted sexual advances are their fault.

In the account in The New York Times by Jessica Leeds of Trump’s groping of her, she describes this dynamic at work:

She did not complain to the airline staff at the time, Ms. Leeds said, because such unwanted advances from men occurred throughout her time in business in the 1970s and early 1980s. “We accepted it for years,” she said of the conduct. “We were taught it was our fault.”

In my work with the Mennonite chapter of the Survivors Network of those Abused by Priests (SNAP), I’ve heard again and again about the impact of rape culture on victims of sexualized violence. This culture tells victims like Leeds that they are to blame, and leads them to silence and turning inward with the shame and guilt in ways that exacerbate the trauma of the initial incident.

Rape culture puts huge amounts of pressure on victims of sexualized violence to say silent. Overcoming the pressure takes tremendous energy. It was only after hearing Donald Trump deny his claims of sexual assault from the 2005 audio clip during the nationally televised presidential debate that these victims came forward. This is part of why the Mennonite Abuse Prevention (MAP) list publicly names those credibly accused of sexual abuse. In “Why we Name Names”, Barbra Graber puts it this way: “When the naming is accompanied by an invitation for those with additional information to come forward, there is greater opportunity for the full truth to be known.”

Rape culture hurts all of us because it communicates that some of us are sexual objects rather than children of God.

How can you be part of challenging rape culture in your community?

1. We have an opportunity to talk about the importance of consent. Here’s a simple video that uses the metaphor of tea to explain what consent means:

If the subject of the presidential election comes up with friends or family, take the opportunity to talk about consent.

2. When you hear others making jokes that objectify people as things to extract sexual pleasure from rather than humans, remind them that they are talking about people. This often happens when men are talking about women, but it can happen in other situations, too.

Learning to speak up takes practice. Find a friend to try a simple role play with in which one of you makes a comment that perpetuates rape culture and the other speaks up and challenges it. If you’ve never used a role play as an educational tool before, you can read more about how it works in the role play section of this article about training tools from Christian Peacemaker Teams.

3. If someone tells you about their experience of sexualized violence, believe them!

Journalist Lucia Graves writes in the Guardian about how hard it is for female victims of sexualized violence to be believed:

“This is an issue that’s come up before this year, and not just on the presidential campaign trail. We didn’t need one woman to come forward against Bill Cosby in order to get society’s attention – we didn’t even need 10 of them to. We needed male comedian Hannibal Buress to make a joke about it. For a lone woman to be heard she seems to require special status. Numerous women have now come out to accuse Roger Ailes, former Fox boss – and current Trump surrogate – of sexual harassment. But they were only empowered to do so after one of the country’s most famous female anchors filed a lawsuit.”

If someone tells you they’ve been robbed, you usually don’t start by asking them what they did to deserve it or doubting their story. Why would sexualized violence be different? Here’s a whole website you can read up on if you have more questions: “Can I really say that?” on StartBelieving.org.

4. Get involved in organizing in your community to challenge sexualized violence and rape culture. There are many movements and organizations doing this work such as rape crisis centers and chapters of SNAP all over the world. For men interested in being involved in this work, the National Organization for Men Against Sexism (NOMAS) has many resources available.

On Thursday, Michelle Obama made the wider connection between Trump’s comments and the wider impact of sexualized violence. While her speech was part of a campaign event, her words resonate far beyond the partisan politics of this presidential election.