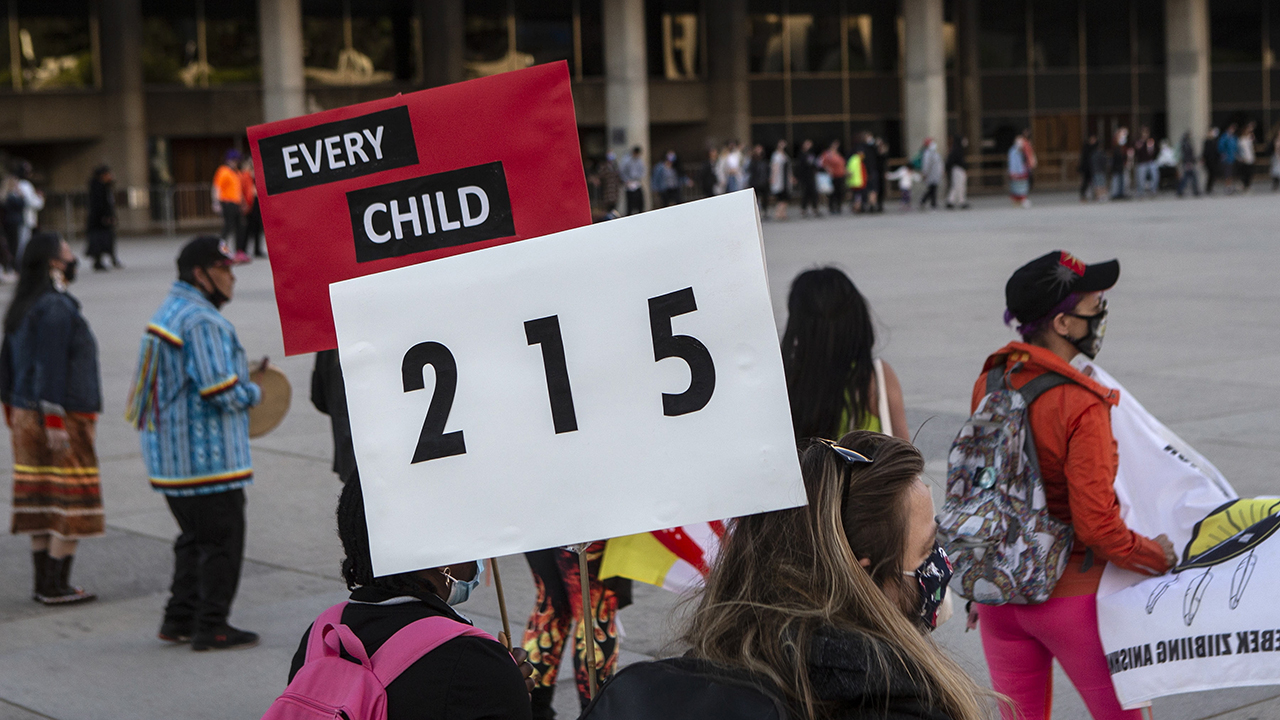 People form a circle during a vigil in Toronto on May 30 for the 215 Indigenous children whose remains were uncovered on the grounds of a former residential school near Kamloops, B.C. The discovery of a mass grave was announced late May 27 by the Tk’emlups te Secwépemc people after the site was examined by a team using ground-penetrating radar. — Chris Young/The Canadian Press via AP

The discovery of the remains of 215 Indigenous children in unmarked graves at a former Catholic Church-run residential school in Kamloops, B.C., has prompted responses from religious groups across Canada, including Mennonites.

On its Facebook page, the Canadian Conference of Mennonite Brethren Churches said that the discovery, announced on May 27, “reminds us again of the atrocities committed against Canada’s First Peoples” and that “knowing that this occurred under the oversight of the Christian church is shameful.”

These acts, it went on to say, “should grieve us to the point of action. We mourn with our Indigenous brothers and sisters, and we commit ourselves to peace and reconciliation in the name of Creator God.”

The CCMBC went on to list ways people could honor the dead children and learn about the history of residential schools, which operated in Canada from the 1800s until the last one closed in 1996.

The goal of the schools, funded by the Canadian government but operated by churches, including in a few cases by Mennonites, was to assimilate Indigenous children into white Christian culture and society.

As Roman Catholic Bishop Vital-Justin Grandin of Manitoba said in the late 1800s, the goal of the schools was to “instill in [the children] a profound distaste for native life that they should feel humiliated when reminded of their origin.”

Over 150,000 children, some as young as 4 or 5, were forcibly taken from their parents to the 130 schools across the country. Many were physically and sexually abused, and an estimated 6,000 are believed to have died in the schools due to illness and poor living conditions.

The dead were usually buried on the grounds of the schools, often in unmarked graves and without their parents being notified — as happened at Kamloops.

Also responding was the Evangelical Mennonite Conference, which said it was “shocked” by the discovery of 215 graves and “angry that those who should have reflected Christ instead showed such darkness. But more than anything, right now we are in tears for the children who died, the parents and families who never saw their children again and didn’t know the story, and for communities who grieved and had no answers.”

The Be in Christ Church (formerly Brethren in Christ) offered a prayer of mourning for the lives lost at the schools, saying that this was a time to “grieve, lament, pray and learn.”

At Mennonite Church Canada, news of the discovery of the graves was “heartbreaking.”

The Canadian Indigenous residential school system was based on the model developed in the U.S., where over 250,000 children were removed from their families and sent to over 500 schools.

The goal of U.S. residential schools was to “kill the Indian to save the man,” in the words of Richard Pratt, who founded the first school in Pennsylvania in 1879.

Mennonites were involved in three residential schools in Ontario through the U.S.-based Northern Lights Gospel Mission, and in three day schools in Manitoba and Saskatchewan.

In 2019, Mennonite Central Committee Ontario and Mennonite Disaster Service Canada teamed up to help renovate the former Mohawk Institute Residential School in Brantford, Ont., as part of an effort to turn the building into a living museum.

On June 24, leaders of Indigenous groups in Canada said investigators had found more than 600 unmarked graves at the site of another school — Marieval Indian Residential School, which operated from 1899 to 1997 about 85 miles east of Regina, Sask.