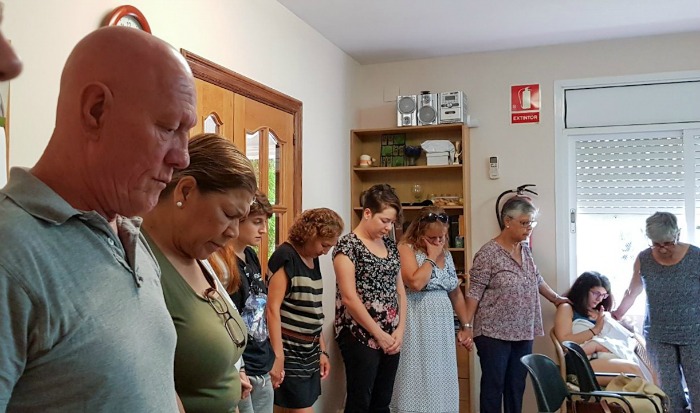 On Sunday, Aug. 20, members of Comunidad Evangélica Menonita in Barcelona adjusted their regular plans for worship, instead opting to invite community members to join them for a time of praying and grieving together, following a week that included two attacks in Cambrils and the Las Ramblas area of Barcelona, Spain, on Aug. 17. Fifteen people were killed in the attacks, and over 100 were wounded.

The poster circulated by the Barcelona Mennonite community inviting people to Sunday’s service read, “We are looking for answers to the violence. We move toward the teachings of Jesus. We invite you to share your pain and seek peace.”

In a letter to Anabaptist congregations in Spain on Aug. 18, Gabriel Martín Lopez, one of the elders of the Barcelona Mennonite community, wrote, “In Barcelona we are appalled but all well. Every one of our contacts [is] fine, and many are still on holidays and aren’t even in the city. We ask for prayers for the victims and support for serenity and peace.”

On Aug. 19, Ignacio Simal Camps, a pastor in Barcelona, lamented the ways Muslims and the Islamic faith were being misrepresented following the attacks. Citing James 3:18 (“Peacemakers who sow in peace reap a harvest of righteousness.”), he wrote: “I want what we have right now, a place that is diverse, hospitable, tolerant, respectful and democratic! For this reason, I stand against any phobia, tiny as it may sound, which could threaten to tear apart the social coexistence in my country. We are called to be craftsmen of peace. Therefore, before we open our mouths or write, let’s say to ourselves: ‘I must think!’”

Mennonites in Spain are also mourning the loss of Jose Luis Suarez, a retired Mennonite pastor and longtime advocate for peace in Barcelona. Suarez was the 2009 Diaconía Award recipient, an award that recognized his work in the local community around the church. He was selected to receive the award by the Confederation of all Evangelical churches in Spain. Suarez died on Aug. 14 after a three-year journey with lung cancer. Dennis and Connie Byler, Mennonite Mission Network workers in Burgos, Spain, were among a group of Mennonite leaders that traveled to Barcelona on Aug. 15 for the funeral.

“His influence went far beyond Barcelona to all of Spain and also Europe as a promoter of a peace culture, of social action and mediation and conflict resolution. The whole world needs prayers for peace and more people of peace like Jose Luis Suarez,” wrote Connie. “I am reminded of the [2009] terrorist act in Burgos, when at the end of the prayer meeting the night before, I suddenly felt an unusual urge to pray for the safety of all our church members, even for angels to watch over all our families as summertime was upon us, meaning travel on the highways.”

The morning following the prayer meeting, the city of Burgos experienced an attack, when a van bomb detonated only 10 meters from a church family’s home. Miraculously, no individuals were killed in this attack, but more than 65 people were injured in the attack.

“The whole world needs people praying for and working for peace,” wrote Connie. “I make a call to Mennonites…to prepare, to pray and to go into the whole world.”