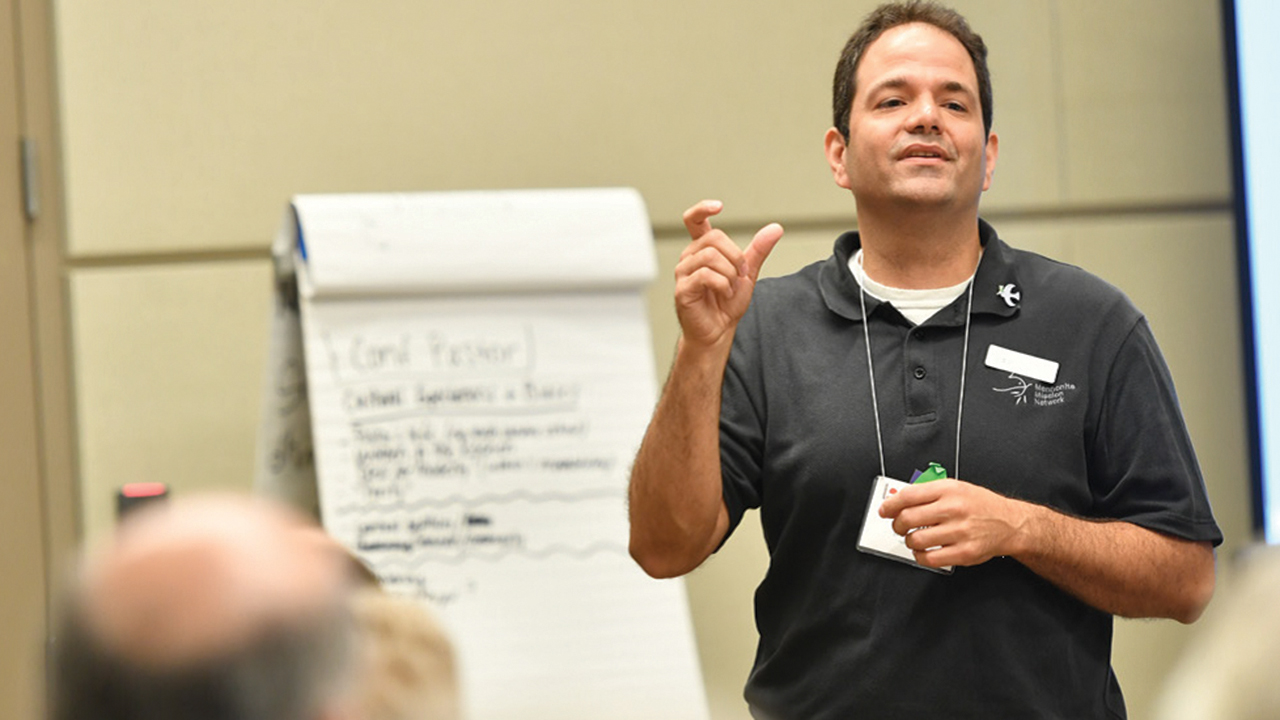 Mennonite Mission Network closed its Peace and Justice Support Network at the end of July. In September, MMN executive director Mike Sherrill said the agency intends that a peace and justice focus will permeate its work even though it is not assigned to one person or division.

Sherrill wrote in the August issue of PJSN’s DoveTales newsletter that PJSN’s values and activities will live on through a discipleship training program, international workers and partners sharing the gospel and service programs that put God’s love in action.

He expanded on his newsletter article in late September, stating that the agency is realigning its structure to be more agile and responsive to the changing needs of churches, conferences and partners.

“Mission Network desires to integrate this important work with our total approach to peace and justice work,” he said in comments distributed by MMN. “In addition, retiring the PJSN brand name releases those values to radiate through the agency, influencing how we embody the peace of Christ and engage his approach to justice.”

PJSN formed in 2002 after the merger of the General Conference Mennonite Church and the Mennonite Church into Mennonite Church USA. It combined the MC Peace and Justice Committee and the GC Commission on Home Ministries’ peace wing and was led in earlier times by Susan Mark Landis and Leo Hartshorn.

Popular among peace activists, PJSN was most visible to the broader swath of constituents when it recognized peacemakers at MC USA conventions with its Peace Pitcher Award, a practice that ended in 2011.

The network moved fully within MMN about four years ago, after former minister of peace and justice Jason Boone was appointed to PJSN’s staff position about 10 years ago. He confirmed to Anabaptist World that his employment, which was full time, ended July 31.

He said confusion about where to place PJSN within MC USA after the denomination’s merger meant leaders talked about peace’s importance while the network bounced between MC USA’s and MMN’s separate structures.

“I felt that PJSN having a history and bringing in some income meant it had a chance,” Boone said. “Once you start with leadership changes, anything can happen.”

PJSN confronted societal apathy about militarism and protracted wars. Its Mennonites Against Militarism project — a collaboration with Mennonite Central Committee and Sue Park-Hur, MC USA denominational minister for transformative peacemaking — is being evaluated for how it could move forward.

In an interview, Sherrill noted the similarity between Boone’s and Park-Hur’s roles but said he could not respond publicly to staffing questions, which are an internal matter.

“Rather than doing some of the same things in two different arenas without communicating with each other, we would rather collaborate on what Mennonite Church USA is doing together,” he said. “By releasing the work of PJSN into the organization, letting it go outside that compartment, that will free us more to collaborate with MC USA.”

Boone looked back with pride on materials used in Sunday school classes and work with returning veterans, which he felt broke new ground for peace churches. Now, he wonders who will give attention to those kinds of projects, because of the many directions in which denominational ministers can be pulled.

“The way our institutions are shrinking, for the most part, but the mission continues to be there or expand in some cases, you have people working parts of two jobs and trying to have a more dynamic workspace,” he said. “It sounds good, but if you’ve actually been involved in an organization, you know that can be very challenging.”

“In this environment, all peace and justice activities that have been occurring across the street and around the world can be shared with each other,” he said. “This opens the way for mutual learning and expanding how we engage peace and justice initiatives.”

He said the decision to cut the program was not made for fiscal reasons.

Boone said he has heard from people who are angry and frustrated about the decision.

“After years of supporting PJSN in every way possible, they feel blindsided by this,” he said. “I’m sorry things ended this way.”

*Editor’s Note: For full transparency for our readers, Tim Huber, the author of this article worked for PJSN for one and a half years from January 2010 to July 2011.