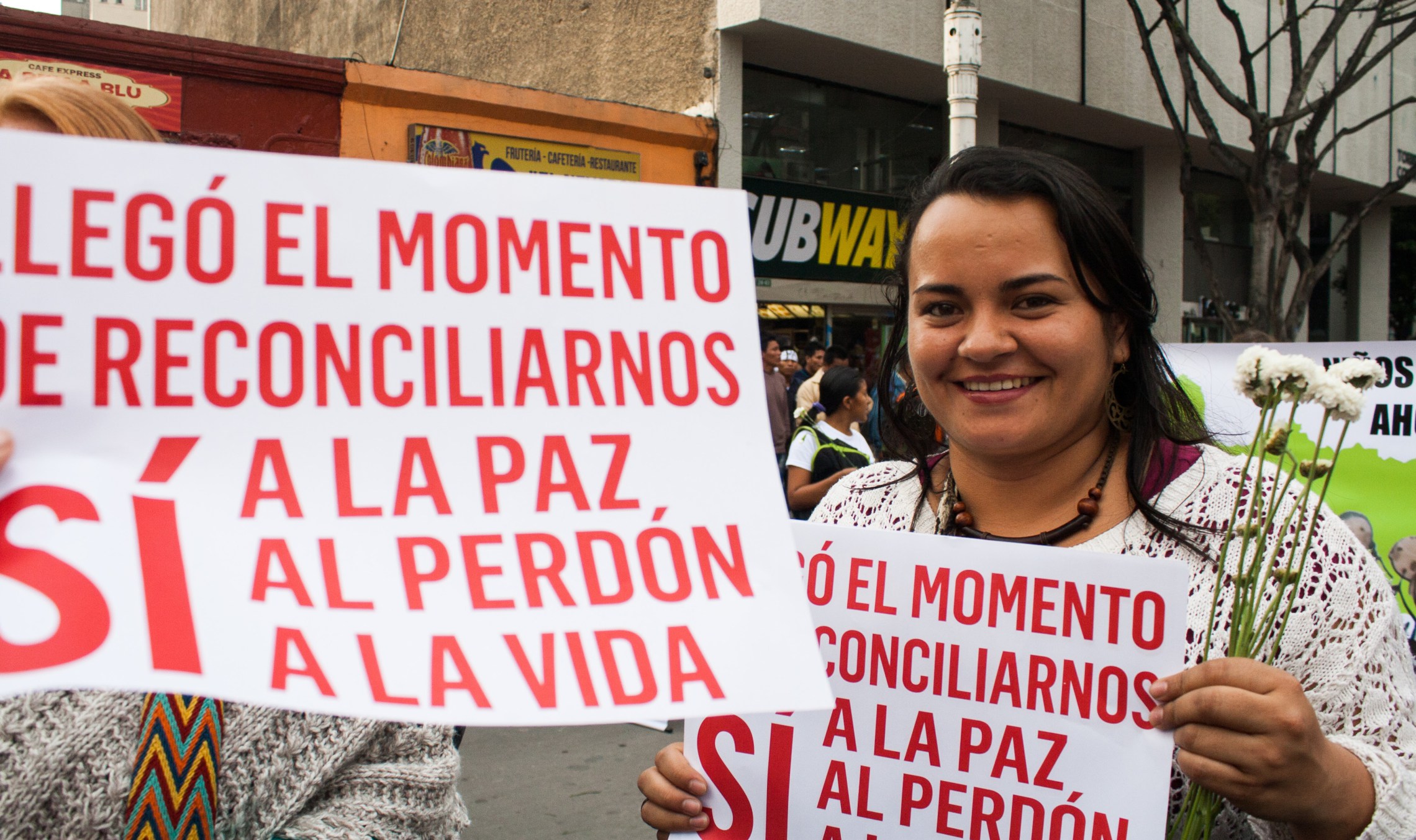 Photo: Carolina Perez, MCC Colombia worker and member of a Mennonite Brethren Church in Bogotá participates in a march in Bogota to demand peace accords after the plebiscite. Photo by Anna Vogt.

Bonnie Klassen is the Area Director for South America and Mexico. She lives in Bogota, Colombia.

I still remember when the Caguan Peace Talks between the Colombian Government and the Revolutionary Armed Forces of Colombia (FARC) ended on February 25, 2002. Like my colleagues at Justapaz, the Colombian Mennonite Justice and Peace Center, I felt distraught, but not surprised. It was a sad ending that we could all see coming. During the three years of dialogue, all of the armed groups in Colombia, including the FARC, the Colombian Armed Forces and the United Self-Defense Forces of Colombia (AUC) had intensified their military strategies and horrific attacks against the civilian population. In hindsight, it’s hard to remember genuine gestures for peace from any of the armed groups during those years.

Now, 14 years later and after four years of new peace talks, the sequence of events in the last six months has created an entirely different mood, with a series of emotionally charged scenes leading up to a momentous finale: ceasefire agreements on June 23, the final text of the peace accords on August 24, and the formal signing on September 26. These announcements punctuated a polarizing campaign in support of and against the peace accords, leading up to a national plebiscite on October 2. Nonetheless, everyone expected an exhilarating “THE END” to the negotiation process with the approval of the peace accords in the plebiscite.

Shocking everyone, the no vote won, with 50.2 percent of the total 13 million votes.

When I found out about the results of the plebiscite, I was on a very remote road in one of the regions hardest hit by the armed conflict. Travel was once prohibited in the region between 6 p.m. and 6a.m., due to “combat hours.” Riding in the dark, the memory made me nervous. Would this region return to that?

In the shock of the moment, I felt as if the country had just jumped off an edge without checking the depth of the fall or whether anyone brought a parachute.

In reality, Colombia has not shattered into pieces and this is not just a strange final ending.

No one expected the no vote to win. The government admitted, “We had no Plan B.” The no campaign leaders seemed equally surprised that they actually won and had no specific alternatives ready to propose. The Norwegian Nobel Committee also had some additional explaining to do when they awarded President Juan Manuel Santos and the Colombian people the Nobel Peace Prize a few days later.

In the end, a small group of leaders from the different facets of the Colombian elite (the government

and its political opposition) will likely reach a new agreement behind closed doors so as to not destabilize the country, to their detriment. At least this is what happened at the end of Colombia’s last civil war in the late 1950’s.

Unless, however, the Colombian people step into the scenario and create a new twist in this story. Instead of just spectating or getting stuck in analysis, Colombians can focus on understanding and inclusion, in the face of a long legacy of elite exclusion, mirrored in general society. That sounds too idealistic to be practical, unless we change our practice. This is why Colombian Mennonite peace leader, Ricardo Esquivia, immediately evaluated the plebiscite results as “a unique opportunity to make sure community voices emerge and are heard.”

As I think about listening to all of the voices, I was struck by this reflection by Elizabeth Phelps, Co-Representative for MCC Colombia, based on the story of the prodigal son (Luke 15:11-32):

“I wonder about the prodigal son’s older brother. Could it be that he didn’t feel included in the decision to reintigrate his younger brother into the family? Could it be that he never really felt love and kindness from his father? Could it be that he was super worried about educating his many children, and he suspected that his father was going to divide the remaining inheritance with the prodigal? Maybe he doubted that his brother was truly repentant? (And what about their sisters? Is it possible there were no daughters in the family?) How can there be a national dialogue based on respect, trust, empathy, listening, and fraternity? At the very least we can begin little by little, in our team, in our work places, in the churches. It is very clear to me that this country is living through a moment of intense pain right now, and we must be compassionate in response.”

I am encouraged by the thousands of people who have marched for peace together across the country in the last two weeks, even though they may have voted (or not voted) differently on October 2. My husband has probably participated in every peace march to Bogotá’s Plaza de Bolivar in the last 30 years, and he has never seen such diversity and respectfulness among participants. The massive marches keep happening, every day in different towns and cities. In a country where we have been afraid to go out at night for so long, these candle-lit vigils, organized by young Colombians, seem like an awakening and a call for a different ending.

I place my hope in the many communities in the periphery of Colombia, including the Anabaptist churches in Chocó, Cali, Cauca, Ibagué, Soacha and Bogotá, who have been caring for victims, speaking the truth and re-humanizing perpetrators of violence for years already – with or without the accords. These are Colombia’s peacemakers.