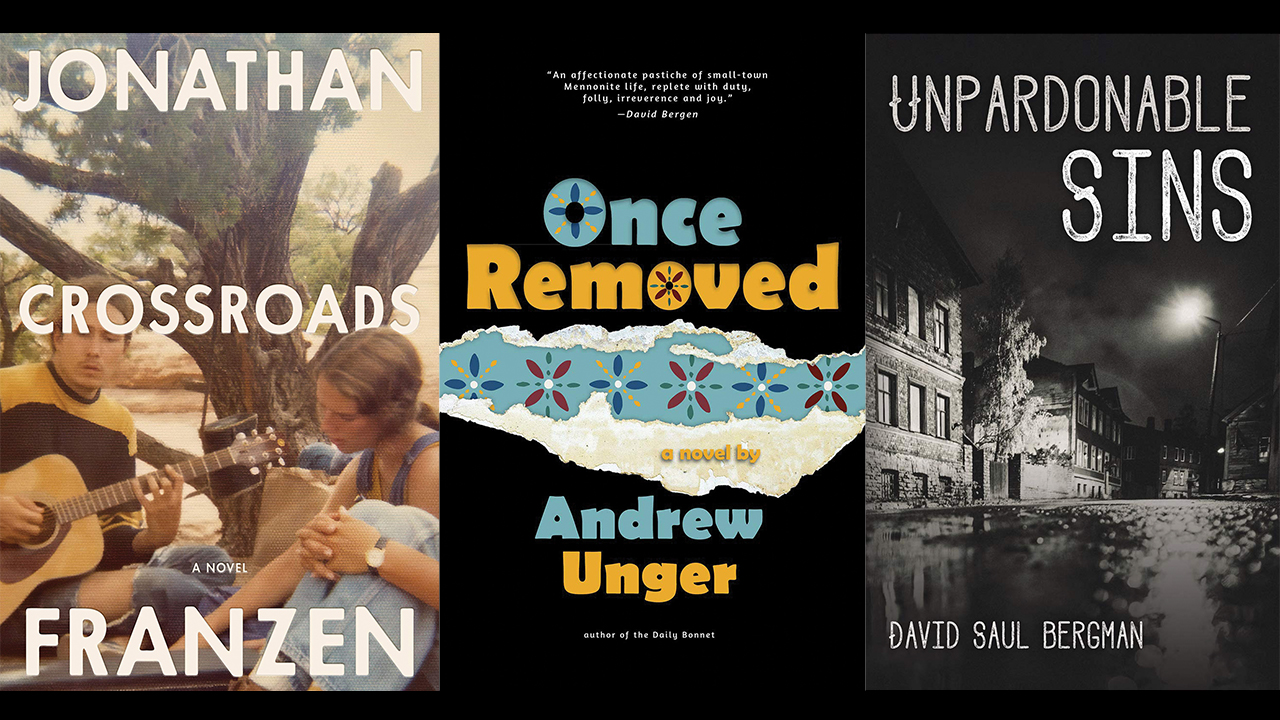 The Oct. 29 issue of Anabaptist World included several mini reviews of recent books. Some of them are fiction books.

The central figure of Crossroads (Farrar, Straus and Giroux) by novelist Jonathan Franzen is a pastor with a Mennonite background — Russ Hildebrandt — the husband and father in a family falling apart. The point of view rotates among family members from chapter to chapter, orbiting waves of temptation, infidelity and doubt.

Conceptualized as the first part of a trilogy, the novel is preoccupied with what separates an authentic desire to be a good person from performance based on wanting to be perceived as good.

“I am singularly uninterested in the­ol­ogy,” Franzen told New York magazine, elaborating on the challenge of portraying religious motivations in imperfect lives. “I’m not uninterested in the Bible, both Testaments. I think the Gospels are an incredibly powerful document. But if you go to the original source, the Gospels, there’s only one commandment that matters, which is ‘Love your neighbor as yourself.’ Jesus says, ‘Yeah, all these other things are important. But that’s the key thing.’ ”

Franzen — an acclaimed American novelist and essayist — was inspired to write the novel when he met someone with a Mennonite background who became the basis for a character.

While questions of good and bad haunt the pastor and his family members, Franzen believes he has “produced a book that has essentially no theology in it.”

“Even when we go back and look at the Mennonites, we are looking at people who wanted to be radical, wanted to return to what they saw as the true Christianity as it was expressed by the very first Christians recounted in the Book of Acts,” he said. “That’s about a way of living. It’s about a certain kind of humility and contemplation, a disengagement from the world, rather than about a list of specific things you should and shouldn’t do. I think the questions for me are, am I a good person? What can I do to be a better person?”

They say to write what you know. The creator of the satirical news website The Daily Bonnet did just that when he wrote a novel about a writer. Once Removed (Turnstone Press) by Andrew Unger casts his comedic lens on the fictional community of Edenfeld, Man., where Timothy Heppner has grown frustrated making ends meet by ghostwriting fellow Mennonites’ family histories. A member of the town’s preservation society, Heppner finds himself in awkward positions when his job with the parks and rec department puts him in league with the mayor’s dream of bulldozing anything old. Fans of The Daily Bonnet will delight with Unger’s affection for the tiny frustrations of small-town Mennonite life sparkles.

Pastor John Reimer, a country boy from western Kansas shepherding an urban Mennonite congregation in Chicago, possesses a curiosity and approachability that lead him to investigate a grisly murder. Unpardonable Sins (Wipf and Stock) by David Saul Bergman is a novel thick with grit, characterization and more than a nod to Anabaptist identity, recognizing that most Mennonites are both in and of the world, for better or worse. This is, without a doubt, the first book to span the sacrament of ham gravy, hate crimes, the Kansas Mennonite Men’s Chorus, Chicago-style political intrigue and a Mennonite Central Committee relief sale quilt.