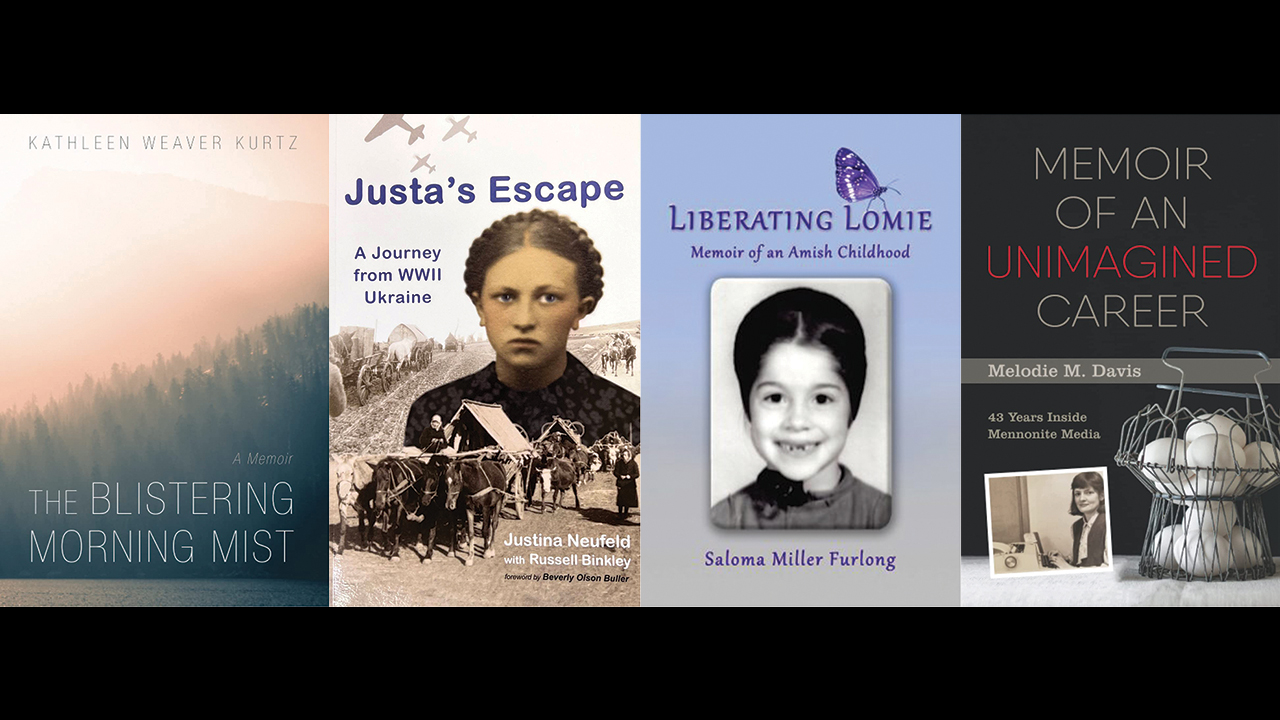 The Oct. 14 issue of Anabaptist World included several mini reviews of recent books. Some of them are memoirs.

“Out we go, into the blistering morning mist,” Kathleen Weaver Kurtz’s little son Geoffrey exclaimed as he darted into the Kentucky fog on his first day of kindergarten. In Kurtz’s mind, mist became “the promise of far-off brilliance — life in the blazing sun. . . . Pretending and dreaming were, [however], substitutes for what I assumed could never be.” The tantalizing, paradoxical title of her memoir — The Blistering Morning Mist (Wipf and Stock) — hints at the beauty and depth of her telling of the stories of her early years in her Mennonite world near Eastern Mennonite College and eventual explorations as far away as Botswana under Mennonite Central Committee with her husband, Wayne — and finally, after some uncomfortable years of teaching, to a seminary degree and doctor of ministry degree, qualifying her to be a licensed pastoral counselor. Along her way came tragedy. When she was 3, her father died in a plane crash. While both her Grandpa (highly respected EMC dean Chester Lehman) and Grandma Lehman made her feel safe, as did Uncle Bob, who could build things and freeze ice cream, it was only in later years that she discovered in therapy the depth of her continuing grief. Still, she realized one day that her life was much richer than she ever imagined. — Nancy V. Lee

How shall young readers learn an elder generation’s stories of suffering, trauma and courage? Justa’s Escape: A Journey from World War II Ukraine (Resource Publications) makes harrowing wartime experi­ences accessible, and not just for young people. This quick-read memoir will captivate adults as well as middle-schoolers and teens. Structured in short lines of poetic free verse, Justina Neufeld weaves memories of a child’s world of simple joys, overshadowed by fear and deprivation, in a Mennonite village in 1930s Soviet Ukraine. Will her father be the next who is seized by Stalin’s henchmen in the middle of the night, never to return? Then comes war and a desperate flight to Germany for 13-year-old Justa and her family. After years as a refugee in Europe, she finds safety in Holland and eventually immigrates to the United States, thanks to Mennonite Central Committee. The war scatters her parents and siblings across three continents — a story Neufeld previously told in a longer memoir, A Family Torn Apart. In this retelling, Neufeld, with co-author Russell Binkley, personalizes a pivotal story from Mennonite history and achieves a high standard of storytelling with simplicity, clarity, depth and drama. — Paul Schrag

Readers who were captivated and informed by Saloma Miller Furlong’s first two memoirs — Why I Left the Amish and Bonnet Strings: An Amish Woman’s Ties to Two Worlds — might wonder what more she could tell in a third. The answer is: a great deal. It took nearly a decade after her mother’s death before she could take an honest look at how her mother abused her and how her Amish community imprisoned her personality. In Liberating Lomie (Memory Pages), many of her early memories are filled with her mother’s warmth and care. But “Lomie” learned by the age of 5 that “danger lurked in the shadows of our home, and it didn’t always come in from the outside.” Often it came from her mother. Along the way, though, Furlong found comfort in the beauty of the woods around their home, in books at school and with friends. Yet ending school after the eighth grade, as the Amish required, painfully diminished her world. After leaving home, she found healing with counselors, the love of her Vermont husband, their two sons and Smith College. Why write about the abuse? Furlong explains: “I realized that forgiveness does not include bearing the burden of silence as Mem [her mother] had done. . . . Instead of forgiving and forgetting, I am remembering and relinquishing.” — Nancy V. Lee

Melodie M. Davis can locate the exact time and place when her vocation came to her. She was gathering eggs in the chicken house on the family farm when she wrote: “On this day, November 18, 1967, Saturday afternoon at 4:30 p.m., I decided what I want to be: a Christian writer.” Spoiler alert: She achieved her goal. The announcement of her calling at 16 led to a winding journey through an institution now called MennoMedia. In Memoir of an Unimagined Career: 43 Years Inside Mennonite Media (Masthof), Davis describes the changing environment for media as the church offered books, documentaries, television programs, websites and ads for two audiences: 1) church members; and 2)others interested in the values of the church or just curious about a small and little-known denomination. Working in Harrisonburg, Va., she became a columnist and author of several books. The story she tells here will serve as a history of MennoMedia and its predecessors until an official one is written. Davis is wide-eyed all the way through, from the farm to her brushes with big-city media people. She never loses her enthusiasm and sense of awe that she got to travel, learn new skills, represent her faith group and navigate bumps and bruises that are part of the learning process. I traveled down memory lane with her, remembering the ways the church sought both nurture and outreach over the years. — Shirley Hershey Showalter